EXCLUSIVE – House Republican Reps. Jim Jordan and James Comer are demanding answers from U.S. special envoy for climate John Kerry about his Biden administration role, a newly created position which gives him a seat on the National Security Council, in a letter sent Monday.

“It is of paramount importance that we conduct oversight over your position as the Special Presidential Envoy for Climate and how the position will impact the interests of the United States, especially where the role appears to intersect with the U.S. response to a hostile foreign regime such as the Chinese Communist Party,” Jordan, R-Ohio, and Comer, R-Ky., wrote in the letter. “The American people deserve to understand your role in the government and what authority you have to negotiate with foreign adversaries.”

Jordan, ranking member on the House Judiciary Committee, and Comer, ranking member on the House Committee on Oversight and Reform, demanded “all documents and communications from January 20, 2021 to the present regarding negotiations” between Kerry and Chinese officials. They also demanded communications regarding the “nature and scope” of his role and an explanation of why Kerry has “a need to know classified national security information and maintain a security clearance.” They asked for the information by June 28.

“President Biden said he selected you, in part because you are ‘one of [his] closet friends,'” Jordan and Comer wrote. “It appears that in your role, you have some ability to set foreign policy and to bind the United States to international agreements, despite not being confirmed with advice and consent of the Senate.”

“To date, the White House has failed to provide any information about your security clearance, which Committee Republicans requested on May 4,” they continued. 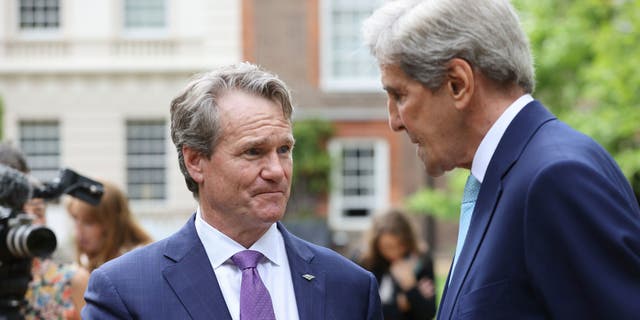 CEO of Bank of America, Brian Moynihan, left, speaks with John Kerry, the US Special Presidential Envoy for Climate, during a sustainability and G7 engagement event for Terra Carta Transition Coalitions, an organized, global collective working together to drive investment towards a sustainable future for Nature, People and Planet, at St James’s Palace in London, Thursday, June 10, 2021. (Chris Jackson/Pool Photo via AP)

In April, the U.S. and China, the world’s two biggest carbon polluters, agreed to cooperate to curb climate change with urgency, just days before President Biden hosted a virtual summit of world leaders to discuss the issue. The agreement was reached by Kerry and his Chinese counterpart Xie Zhenhua during two days of talks in Shanghai.

Later in April, Kerry said the U.S. and China’s “differences on human rights” should not preclude the countries from working together to fight climate change.

“We have differences on economic rules, on cyber. We have other differences on human rights, geostrategic interests, but those differences do not have to get in the way of something that is as critical as dealing with climate. … When I was in China the other day, we negotiated back and forth in good faith,” he said.

Kerry is one of the richest members of the Biden administration, and financial disclosure documents show that his wife owned fossil fuel-related stocks even as he traveled the world preaching about the existential threat of climate change.

Biden’s State Department dragged its feet for weeks before releasing Kerry’s public financial disclosures, which revealed new details about Kerry’s wealth, including that he received $5 million from Bank of America as chair of the bank’s Global Advisory Council.

Fox New’s inquiry to the State Department was not returned at the time of publication.