Speaking during a press conference on Friday, Cuomo applauded the recently announced Biden plan, which some officials have labeled a “bailout” for blue states.

Cuomo instead called the plan a chance for New York to “reclaim” money lost by the state over the past few years.

“I am not a big fan of the current administration – shocker, as that may be,” Cuomo said. 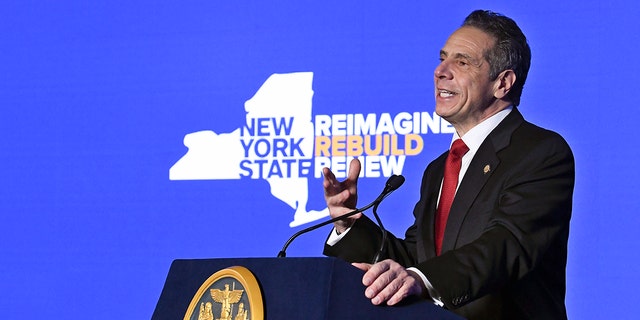 The SALT (State And Local Tax) deduction from the federal government allows taxpayers in high-tax states to reduce their federal tax liability based on their local and state tax payments. The 2017 Tax Cuts and Jobs Act capped these deductions at $10,000.

The state will now seek $15 billion from Biden’s “rescue” plan, which Cuomo says is a “payout” for “theft” by the Trump administration.

Cuomo believes the SALT cap compounded issues that arose during the coronavirus pandemic, which has been hard on New York State.

“We paid a price for federal incompetence,” Cuomo said. “Either they lied to us or they were incompetent.”

The money would go toward expanding testing sites and managing the distribution of coronavirus vaccines, which has been a struggle for the Empire State.

JANICE DEAN SLAMS CUOMO OVER VACCINE ROLLOUT: HE IS FOCUSED ON ‘BEING A CELEBRITY INSTEAD OF BEING A GOVERNOR’

Since the early phase of the pandemic, Cuomo has repeatedly accused President Trump of reacting slowly to the virus and not letting the public know how severe the virus would be.

One of the major factors Cuomo cited Friday was the fact that the Trump administration continued to increase eligibility.

“I think what they did was politically motivated,” Cuomo said.

“On the way out the door, they could say ‘we made it eligible to everyone and we increased supply,'” he said.

“They did not buy more Pfizer or buy more Moderna, they didn’t approve Johnson and Johnson,” Cuomo claimed. “So I think it was all politics.”