How do you do, fellow kids?

Hizzoner donned the get-up to announce the city’s latest scheme for encouraging people to get the COVID-19 vaccine — a chance to win tickets to the team’s playoff games if they get the shot at a pop-up site outside Barclays Center.

“The Nets are stepping up for Brooklyn, for all of New York,” de Blasio said during his daily virtual press conference. “This is going to be another extraordinary effort to get everyone vaccinated.” 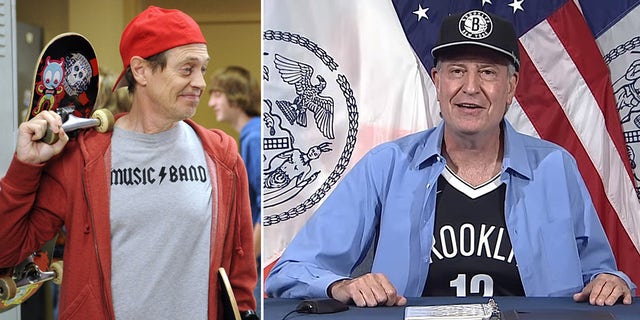 “This is going to be amazing, an amazing opportunity to see one of the greatest teams in a long time, and a team that’s going to bring glory to Brooklyn and New York City.”

Nets CEO John Abbamondi, who joined de Blasio for Tuesday’s presser, said they would try to get “as close to full capacity” as possible, with most sections of Barclays set aside for vaccinated people and just a “handful” of physically distanced seats for unvaccinated attendees.

“There is a light at the end of the tunnel – it comes in the form of a vaccine, and we’re really delighted to be part of the vaccine effort,” he said. “We’re really looking for our fans to get vaccinated”

Abbamondi and de Blasio expect the Nets will go deep into the playoffs, so there will be several opportunities to score tickets.

“We’re super excited for the playoffs. … We make no secret about it, we have very high ambitions for this season,” Abbamondi said.