While extra federal jobless benefits are set to expire in September, Democrats are hoping to learn from the upheaval of the coronavirus pandemic to permanently change the unemployment insurance system to ease times of economic crisis.

“As we’ve seen the last year, it’s much harder for the unemployment system to work in a crisis when it’s been neglected and sabotaged,” Wyden told HuffPost in a statement. “We can’t fail again to fix it in the wake of the second major economic crisis in 10 years.”

Most states already offer 26 weeks of unemployment insurance, but seven do not. And weekly benefits in states range from as low as a maximum of $240 a week, as it is in Arizona, to highs of $855 per week, such as in Massachusetts. This legislation would significantly increase the size of benefits in states like Arizona, where the average weekly salary is more than $1,000.

The bill would also tie unemployment insurance to national economic conditions — something Bennet has proposed in the past and which has broad support among Democrats. 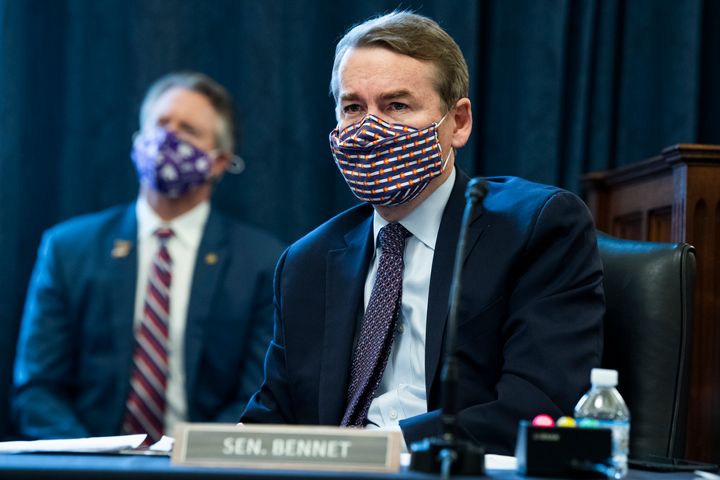 When unemployment reaches above 5.5% either nationally or in a state, this bill would trigger an additional 13 weeks of benefits. Extended benefits would also be fully paid for by the federal government, unlike now, when states have to kick in half the funding.

The proposal has already received widespread praise from progressive groups, but it’s not nearly complete. It doesn’t tackle one of the biggest issues facing states’ unemployment insurance systems: that they are hugely underfunded.

“There are a lot of things in this bill that I think are great… but doing that without fixing the financing is just going to mean states looking for loopholes — making their administrative application process much more complicated, trying to discourage people” from using unemployment insurance, said Rachel Deutsch, an attorney for the Center for Popular Democracy. “I think our folks were very clear that we need to get to as much of a federal system as we possibly can as soon as we can.”

Those trust funds have been seriously depleted during the pandemic as jobless numbers have soared. Already several states have proposed cutting benefits to shore up the funds.

Notably, Wyden and Bennet stopped short of federalizing the entire unemployment insurance system. Their proposal still operates within a framework created in the 1930s that gives states broad discretion over their programs.

“Improving the system above the ground won’t fix the cracks in the foundation,” one Senate aide, who has been advocating for a federalized unemployment system, told HuffPost. “Creating one, uniform federal UI system that is equitable and accessible for workers and ensures employers pay into a system they rely on is what we should be striving for in this moment.”

That’s what Marianne LeBlanc, an unemployed Nevada-based big events coordinator, was hoping for as well. She’s been on the Pandemic Unemployment Assistance program since last year. PUA was created during the COVID-19 outbreak to extend unemployment insurance to those not typically covered by the benefits — such as self-employed workers or those in the gig economy.

“The federal program is the only way we can rectify the discrepancies state to state,” said LeBlanc, an unemployment benefit advocate who said she spent months helping unemployed workers in her community navigate the complicated system. “There are different tolerances, and that’s got to change. There are people receiving under $100 in unemployment. Who can live on that?”

LeBlanc said she would have been in deep financial trouble had it not been for the federal assistance programs put in place during the pandemic, but still she has depleted her savings.

“Even what I’m making right now, I have had to be incredibly frugal to be able to make it and I have exhausted my savings in the process, and I’m not a low-income worker,” LeBlanc said. “These are systems that were never designed to be ready, willing and accepting to this kind of influx.”

The Wyden and Bennet bill re-creates the PUA under a new benefit they’re calling a Jobseekers Allowance: $250 weekly for any unemployed workers not covered by the traditional unemployment insurance system, such as self-employed workers or those who just entered the workforce. That program, along with the extended benefits, would be fully funded by the federal government.

There’s been support among White House officials and Democrats across the ideological spectrum to make more permanent changes to the unemployment insurance system, but there hasn’t been as much urgency behind the proposals in the past. House Democrats backed the idea of tying benefits to economic conditions last summer but dropped the proposal after seeing its cost.

Republicans have shown no interest in expanding unemployment insurance and tried to stop the extension of federal unemployment benefits earlier this year.

Now it’s still an open question whether Democrats will prioritize the issue ahead of the Biden administration’s other big agenda items.

Come September, unless Congress once again extends COVID-19 relief programs for jobless Americans, the unemployed will be left on their own and important safeguards stopping states from reducing benefits will be lifted.

“I hope we can elevate the urgency around this topic,” said Andrew Stettner, of the progressive think tank the Century Foundation. “We do think that Congress should attempt to tackle it this year while memory of this is fresh, before memory of the pandemic becomes too far and states start cutting benefits.”

A HuffPost Guide To Coronavirus