The Justice Department arrested the man for seeking $25 million for a presidential pardon that would have purportedly ended a sex trafficking investigation into Mr. Gaetz. 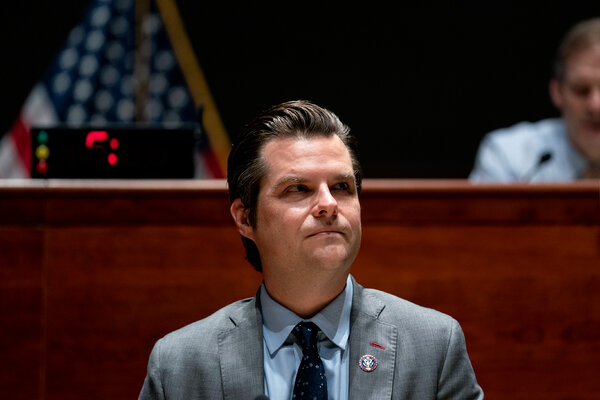 A Florida real estate developer was arrested on Tuesday by the Justice Department for his role in a scheme to bilk $25 million from the family of Representative Matt Gaetz in exchange for a purported presidential pardon that would have ended a sex trafficking investigation into Mr. Gaetz.

The real estate developer, Stephen Alford, and his business associate claimed to Mr. Gaetz’s father, Don, that President Biden would pardon Mr. Gaetz, the Florida Republican and close ally of former President Donald J. Trump, if they gave them $25 million to help secure the release of an American being held hostage in Iran.

At the time of the overtures, Matt Gaetz knew that he was under investigation by federal authorities for paying a 17-year-old girl for sex.

Don Gaetz, a former president of the Florida State Senate, alerted the F.B.I., which later determined that Mr. Alford and his associates were falsely representing that they could secure the pardon.

The man who Mr. Alford claimed he could free was Robert Levinson, a former F.B.I. agent who went missing in Iran in 2007 while on an unauthorized mission for the C.I.A. The Trump administration told Mr. Levinson’s family last year that the intelligence community believed he died in captivity.