Standing in Downing Street in July on his first day as prime minister, Boris Johnson said: “We will fix the crisis in social care once and for all with a clear plan we have prepared to give every older person the dignity and security they deserve.”

If Mr Johnson did have a plan back then he is not sharing it now.

The question of how governments fund and resource the care of rapidly ageing populations is arguably the most pressing public policy issue facing developed nations.

By 2066 the number of over-65s in Britain will have doubled to more than 20 million people, or one in four of the population.

And people are having to sell their homes.

You would not know the scale of the challenge from the debate during the last four weeks, and no party has had less to say about the issue than the Conservatives.

Social care may be in crisis but it is also politically toxic and the Tories know this to their cost, having seen Theresa May’s 2017 election campaign derailed by an attempt to tackle it.

Thereafter her government and Johnson’s repeatedly delayed publication of a Green Paper promised by both Jeremy Hunt and Matt Hancock. 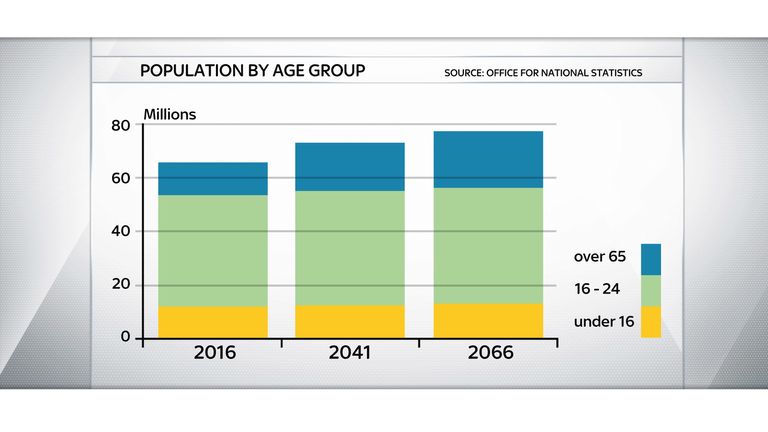 Boris Johnson has effectively avoided the question in this election with a manifesto that makes only a cursory attempt to address the problem.

It commits only to seek “cross-party support” for a social care plan that would mean no-one has to sell their home to pay for care.

There is also a pledge to extend the £1bn short-term bail promised to local authorities in crisis next year until the end of the Parliament.

To deal with the money first, the £1bn increase will be welcomed by stretched local authorities but is not enough to keep up with rising demand.

The Health Foundation calculates that demand is rising at 3.6% a year, leaving a £3.6bn funding gap once the impact of rising wages is taken into account.

And it still leaves a relative chasm to restore social care services to the level seen in 2010 before the impact of austerity, which would take another £11.7bn.

Tellingly neither of the other UK parties are promising to bridge that gap either.

The Liberal Democrats are proposing an extra £2.9bn a year, funded from an extra penny on income tax, and even Labour’s total package of £11.1bn still falls short of restoring services to pre-austerity levels. 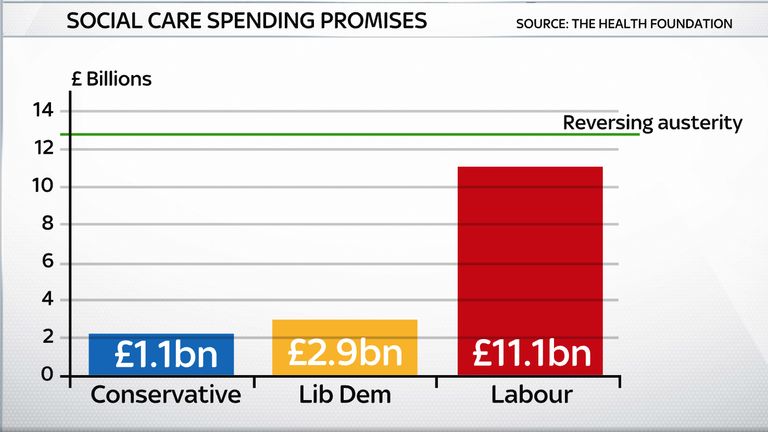 Given Mr Johnson is not sharing the plan he claimed to have had before the election it is hard to be definitive about what he would propose if he is elected.

If homeowners are to be protected however then someone else will have to pay, and the question then is who and how.

Given the Conservatives have ruled out increasing income tax, VAT and national insurance, traditional tax rises the PM would have to look elsewhere or break a central election pledge.

One option would be a compulsory social insurance scheme, perhaps paid only by the over-40s, but that would effectively be a significant new tax.

Andrew Dilnot, who chaired a social care commission for David Cameron in 2011, proposed a cap on how much people would have to pay for their own care of between £25,000 and £50,000.

The state would cover costs above that, with the means testing threshold lifted from the current £23,250 to £100,000.

There are other options but they will all involve some of us having to pay for a service we might never require.

One other point to consider.

The Office for National Statistics reported today that the net wealth of UK citizens rose to £14.6tn in 2016-18, a 13% real-terms increase on the previous two years due primarily to rising property and pension wealth.

This demonstrates that many people do have the assets to cover care costs but if they are not asked to unlock them the options narrow.

This election has demonstrated again that solving social care is as much a question of political appetite as economics.