To the delight of dog lovers, cities and states have begun passing laws to allow dogs to join patrons on restaurant and bar patios.

Many diners have simply asked, “Wait, that was illegal?”

Sure, the United States doesn’t have the rich history of outdoor dining of say, Paris, where pooches are almost as common as croissants at outdoor cafes. But when the weather is pleasant, it’s fairly common to see people settling in for an outdoor beer with their dog at their feet. And as U.S. culture shifts to become more pet-friendly, the numbers suggest it will only become more common.

Pets are increasingly an important part of many people’s lives. U.S. spending on pets has risen from $17 billion in 1994 to an estimated $72 billion in 2018. The number of craft breweries also has skyrocketed since 2010, expanding the number of spots with a dog-friendly atmosphere.

But in many places, health codes simply don’t allow dogs other than service animals to be present at restaurants and bars. Just nine states have laws that allow canine companionship in such places. Many proprietors across the country have been allowing dogs anyway, with owners at worst ignoring the law and at best believing they were operating in a gray area.

“We had no idea, really. It was an obscure law we were completely ignorant of,” said Nick McFarland, manager at Wonderland Ballroom in Washington, D.C., which was warned, along with several other nearby bars last year, about violating the city health code. But as word got out that the city was enforcing the law, public backlash grew, and the City Council changed it just a couple of weeks later to allow dogs in outdoor spaces.

Other places that have recently changed their patio policies followed a similar pattern. A few complaints spurred health department action, only to unleash an outcry from dog owners.

The Franklin County Health Department, which deals with restaurants in Columbus, Ohio, got a record 17 complaints about dogs on patios this year, up from an average of about one or two. But after sending out a letter to remind business owners of the law, more than 12,000 people signed a petition to change it.

Ohio state Rep. Laura Lanese, a Republican who sponsored a bill to allow dogs on patios that is now awaiting the governor’s signature, said “pups on the patio” events and “yappy hours” designed to raise funds for local animal shelters and rescues helped create a community that pushed back against the health regulations.

“I kind of thought it was silly,” Collin Castore, co-founder of Seventh Son Brewing Co. in Columbus, which has hosted a number of such events. “The dogs aren’t prepping the food or anything, so why not let them on the patio?”

The legislation passed by a wide margin, but not all diners were pleased.

“Now, they’re going to be allowed in restaurants — by law!” one woman wrote in a letter to the editor in Cincinnati. “This, because we have some dog lovers in our legislature. This short-sighted move disregards people like me, who can’t be around dogs and many others who simply prefer to dine without animals around.”

Similarly, Virginia lawmakers enacted a law this year to allow dogs at breweries and in tasting rooms at wineries after the state’s department of agriculture sent out a letter reminding wineries that dogs were not permitted on the premises.

“It’s illegal, and it’s always been illegal,” said Elaine Lidholm, spokeswoman for the Virginia Department of Agriculture and Consumer Services, referring to the warning letter sent last year. She cited complaints that “dogs were pooping, lifting their legs on the actual equipment used for fermenting, and it had gotten out of hand. Dogs were running around without leashes and stuff like that.” 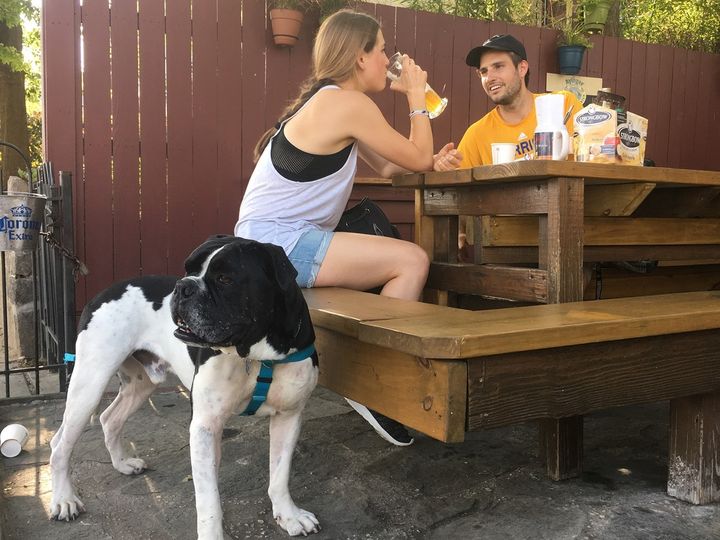 But there was a backlash from winemakers and people who frequent vineyards, arguing the beverages could be made safely even with dogs nearby. Several business owners say they have staff and supplies on hand to deal with accidents, and any issues between dogs and people have been settled amicably. (Lidholm said the department will enforce the new law as well.)

Lee Hartman, winemaker at Bluestone Vineyard near Harrisonburg, Virginia, who is accompanied at work daily by his dog Lula, a “shelty corgi Yorkie poo,” sent a notice to customers last year after receiving the warning letter. “A vineyard without a dog is just a grape farm,” he wrote at the time, asking his customers to contact their lawmakers.

While many bar and winery owners say they want to be inclusive of a population that increasingly views pets as family, not allowing dogs can impact a business’s bottom line. Proprietors who spoke with Stateline say people who come with their dogs tend to stay longer and drink more — an important factor for small-scale alcohol manufacturers who largely rely on selling a few growlers or bottles after people come for a visit.

Brian Roeder, owner of Barrel Oak Winery near the Shenandoah Valley in Virginia, or BOW in homage to the dog on their labels, said the winery is crawling with dogs on weekends. He said allowing them has been key to keeping a relatively new winery in business.

“How do you pay your enormous bills? You create an environment where people want to stay, and to do that, you’ve got to make it a place where people can bring their kids and bring their dog,” Roeder said. “Without dogs, we wouldn’t have made it. It’s not a direct contribution. They’re not buying things themselves. But on any given Saturday, at least 10 percent of people have dogs with them.”

Of course, not all business owners are eager to welcome animals.

“Some wineries don’t want kids, they don’t want dogs or food carts, and they basically say, ‘It’s not our fault we can’t do that — it’s the law,’” Roeder said. “They didn’t want to be the bad guys. They wanted to blame the bureaucrats.” 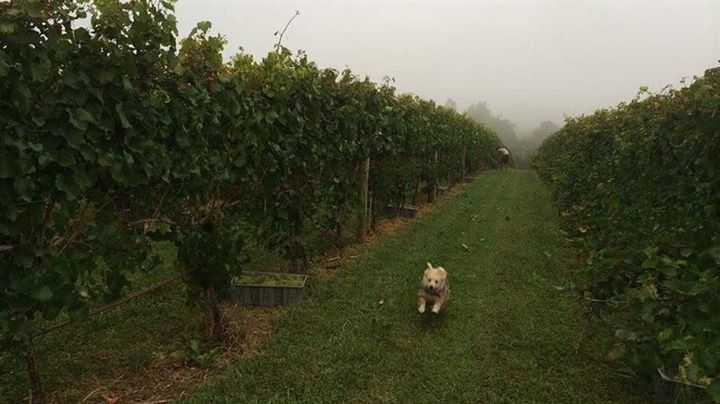 Seventh Son’s Castore, who is also president of the Ohio Craft Brewers Association, was one of those who pushed for a change to the state law and noted that allowing dogs is optional, just as in Virginia.

“The gist was people could be allergic to them or some people are deathly afraid of dogs,” Castore said. “I understand both those things, so I think it’s good for bar and restaurant owners to be able to make that choice if they really feel concerned or have customers who complain.”

Rappahannock Cellars does not allow dogs in its tasting room, in part because the law still bars pets from going inside places where food is served.

“You have some people that think it’s unsanitary for various reasons, and that they should not be allowed in restaurants,” said John Delmare, owner of the winery.

Getting legislation passed in Ohio and Virginia required a fair amount of technical debate on health and safety aspects.

“The way alcohol is made actually kills germs, and when it’s bottled, it’s filtered to the microbe level,” said Virginia state Del. John Bell, a Democrat who sponsored the law there. “There’s no contamination risk.”

In Ohio, the bill initially included provisions that barred restaurant workers from petting the dogs and that required facilities to provide a way to clean up after doggie visitors. Those were ultimately scrapped, but similar provisions are expected from regulations now required by the health department.

So now, dog owners can go out with their four-legged companions, not as scofflaws, but as fully welcomed guests in the eyes of the law.

“He’s ready to hit the bar as soon as we get home. We have to tell him, ‘Hey, it’s not 5 o’clock,’” Gus Ciabattoni said of his Chihuahua Biggie while sipping a beer at Wonderland Ballroom on a recent summer evening. He started taking Biggie out last year after the dog’s sister died, worried that he was spending too much time home alone. “Now in hindsight, we should’ve been bringing them both out years ago.”