As the Trump campaign launches a feverish attempt to contest election results in key states where President Donald Trump’s lead either doesn’t exist or is slipping away, the president’s two adult sons are using their million-follower social media accounts to spread misinformation and promote conspiracy theories about the voting process.

Eric and Donald Trump Jr. have become two of the president’s most important proxies in priming supporters to refuse to accept an outcome in which their father loses the presidency.

Since Election Day, Eric and Donald Trump Jr. have put out a nearly nonstop stream of falsehoods taken from far-right conspiracy theorists and media activists. Many of the hoaxes and conspiracies target swing states including Arizona, Michigan and Pennsylvania, which are key to Trump’s reelection and where final vote totals are still being counted.

One of the many false allegations, which Eric Trump shared on Twitter, claimed to show a man burning 80 “stolen Trump ballots” while saying “fuck Trump.” The video is a hoax and the ballots are not real ― Virginia officials stated the footage shows sample ballots, and police are now investigating the deception. The Twitter account Eric Trump took the video from was suspended. Yet before it was taken down, it had been viewed at least 1.2 million times.

Some of the other baseless claims included misrepresenting a screenshot of vote totals in Michigan as proof of election fraud, falsely claiming that Wisconsin’s voter turnout was mathematically impossible, promoting the conspiracy that election officials were illegally creating ballots to support Democrats and groundlessly suggesting that dead people had cast in-person votes for Democratic presidential nominee Joe Biden. 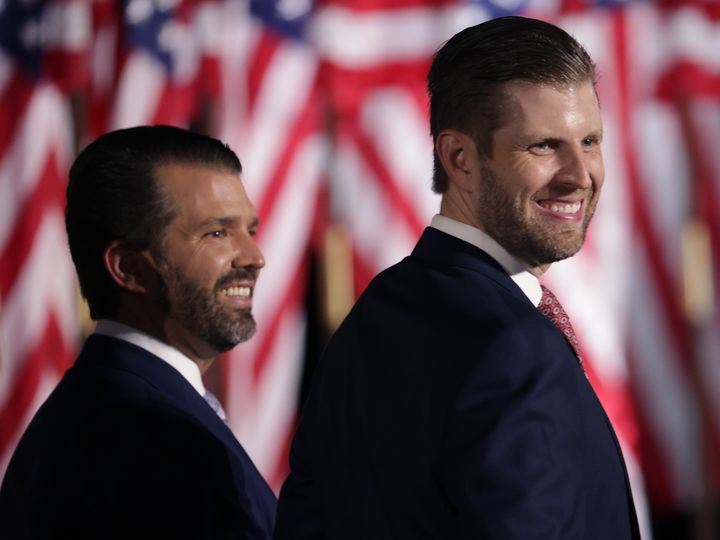 Many of the Trump brothers’ posts since Election Day have been flagged for misinformation on Twitter, Facebook and Instagram, but the president’s sons continue to churn out disinformation and spread a dangerous message that the vote is somehow illegitimate.

“Democrats Are Trying To Steal The Election In Michigan, Wisconsin, And Pennsylvania,” Eric Trump tweeted on Thursday, linking to an article from the right-wing publication The Federalist that contained misleading information about the vote. Twitter labeled the tweet for containing misinformation about the election soon after.

Some of the Trumps’ content first appeared on far-right conspiracy sites such as Gateway Pundit, a notorious source of pro-Trump disinformation. The discredited video Eric Trump shared of ballots being burned originated from a QAnon conspiracy account, while false claims about voting in Wisconsin came from political consultant Harlan Hill, who was cut loose from Fox News earlier this year after he called Democratic vice presidential nominee Kamala Harris a “lying bitch.”

The Trump family’s social media posts have amplified the baseless narrative of pro-Trump media influencers and the president that falsely claims Democrats are attempting to steal the election through widespread voter fraud. As Trump’s path to potential victory narrowed after Biden was projected to win several Midwestern states and as mail-in ballots were counted, Trump officials and MAGA activists have sought to undermine trust in the election process.

Pro-Trump media has fixated on the message that the vote is being stolen and that ballots must be invalidated, or that counting ballots must halt pending review, providing no evidence for these claims apart from widely debunked videos or misleading images. Some outlets and activists, such as far-right conspiracy network One America News, have outright declared Trump’s victory.

Several of these conspiracies pushed by the Trump family or its allies have gained traction among the president’s supporters despite news organizations debunking the claims and social media platforms flagging posts for misinformation.

Pro-Trump protesters in Arizona on Wednesday night brought up the debunked “Sharpiegate” conspiracy, which falsely alleges that Democrats invalidated ballots by giving Trump supporters felt Sharpie pens to fill out ballots. (Election officials stated that use of Sharpies does not invalidate votes, and there are additional backup measures to confirm ballots are accurately tabulated.)

In addition to promoting conspiracy theorists and sharing content from far-right outlets, Trump’s adult sons have directly involved themselves in the legal effort to disrupt the election. Eric Trump held a press conference on Wednesday with his father’s personal lawyer Rudy Giuliani, in which the two announced plans to take legal action targeting vote counts in several states and then proceeded to make a number of false claims about voter fraud.

“We are going to win Pennsylvania, but they are trying to cheat us out of it,” Eric Trump said without evidence.

On Instagram, where Donald Trump Jr. dubs himself “General in the Meme Wars,” the 42-year-old shared with his 4 million followers a fear-mongering video of himself on Election Day claiming Biden “could be bought and sold and paid for by every corrupt regime in the history of the world.”

“Just think of what’s at stake right now. You could have Joe Biden, the most corrupted candidate in the history of the U.S. presidency, where you have social media, Big Tech, mainstream media covering for that kind of corruption,” he said. “You see all the games that the Democrats are playing. You see that they’re trying to cheat.”

Before rattling off a string of debunked claims — including that his father “created the strongest economy we’ve ever known” — Donald Trump Jr. also baselessly suggested mainstream news outlets could be engaged in voter suppression.

“Don’t assume that the mainstream media is being honest to you. They may say, ‘Oh, the Republicans got this,’ just trying to drive down the voting and suppress that.”

Instagram applied a fact-check label to one of his Instagram Stories on Wednesday, which falsely suggested “political cheating” in Michigan was behind a sudden increase in votes for Biden. In fact, a quickly corrected data input error sparked the conspiracy theory, which the president later amplified on his Twitter account.

Donald Trump Jr. posted another story one day later, this time repeating the already debunked claim from a QAnon supporter that someone had burned his father’s ballots. And as Trump’s lead in Georgia and Pennsylvania began to dissipate on Thursday evening, Don Jr. called on the president to “go to total war over this election.”