The announcement by the 61-year old Oz – a cardiac surgeon, author and host of TV’s “Dr. Oz Show” – was widely expected as he’s already been assembling a campaign staff in the 2022 race to succeed retiring GOP Sen. Pat Toomey. The high-profile Senate contest could ultimately decide if the Democrats hold on to their razor-thin majority in the chamber.

Oz is expected to sit down for his first national interview as a Senate candidate on Tuesday evening on Fox News’ “Hannity.” Host Sean Hannity teased Oz’s appearance at the end of his Monday night program, saying that he had a “huge announcement” and hinted “think midterm election.”

Oz enters the GOP Senate primary with sizable name recognition – thanks to his long-running TV show. Oz grabbed national attention more than a decade ago when Oprah Winfrey introduced him to her program’s massive audience. He would also be able to self-fund his Senate bid by dipping into his estimated net worth of roughly $100 million. 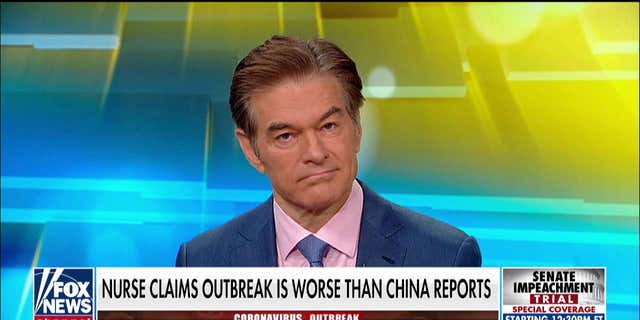 Well-known celebrity physician Mehmet Oz announced his candidacy for the Senate in Pennsylvania on Nov. 30, 2021. Oz is seen in a January 2020 appearance on the Fox News Channel.
(Fox News)

The candidate has lived for years in New Jersey, but Oz registered to vote as a Republican last December in Pennsylvania’s Montgomery County, using the home of his wife’s parents in the affluent Philadelphia suburb of Bryn Athyn as his residence. According to election records, he’s voted twice by absentee ballot in Pennsylvania this year. Oz previously lived in the Keystone State decades ago, as he graduated from the University of Pennsylvania’s medical school and Wharton business school in 1986.

Oz is a political outsider and first-time candidate, and he will face scrutiny as little is known about his political beliefs. And also he’s sure to face serious questions over his sometimes controversial medical advice. He’s been criticized by his peers for promoting diet pills that other doctors have slammed as a sham.

Last year, during numerous appearances on the Fox News Channel amid the coronavirus pandemic, he promoted the use of hydroxychloroquine to treat against COVID-19.

The GOP Senate race in Pennsylvania was rocked a week ago when former congressional candidate Sean Parnell, the perceived front-runner in the Republican field, who enjoyed the backing of former President Donald Trump, suspended his campaign hours after he lost a bitter fight for custody of his three children to his estranged wife.

Among the current leading contenders in the field of nearly 10 GOP candidates are Jeff Bartos, a real estate developer and longtime GOP fundraiser who was a 2018 candidate for lieutenant governor, and Carla Sands, a business executive and Republican donor who served as U.S. ambassador to Denmark during the Trump administration.

After Parnell’s departure from the race, Trump made it clear that he’ll likely weigh in again in Pennsylvania’s Republican Senate primary.

Oz has a connection to Trump, as the then president named him to the Presidential Council on Sports in 2018 and last December reappointed Oz for a second two-year term.

“The influx of unqualified, untested and wealthy Republican candidates in this race will intensify the viciousness of their intra-party fight and leave their ultimate nominee badly out of step with Pennsylvania’s general election voters. The GOP will find Oz is no miracle cure for their mounting problems in this primary,” DSCC spokesperson Patrick Burgwinkle charged.

Seven Democrats are running for their party’s Senate nomination in Pennsylvania, including Lt. Gov. John Fetterman and Rep. Conor Lamb.