WASHINGTON — Three former top Capitol security officials deflected responsibility at a Senate hearing on Tuesday for security failures that contributed to the Jan. 6 riot, blaming other agencies, each other and at one point even a subordinate for the breakdowns that allowed hundreds of Trump supporters to storm the Capitol.

Their testimony illustrated the chaos of the day, suggesting that officials were reluctant to accept responsibility for the politically charged issue of calling in National Guard troops even as the violence escalated. It also showed that the overlapping jurisdictions of the Capitol Police, the District of Columbia government and other agencies created utter confusion that hindered attempts to stop the most violent assault on the Capitol since the War of 1812.

The officials testified that the F.B.I. and the intelligence community had failed to provide adequate warnings that rioters planned to seize the Capitol and that the Pentagon was too slow after the attack began to authorize Guard troops to help overwhelmed police. They also gave their own conflicting accounts of communicating with each other as they sought to quell the riot in its early minutes.

“None of the intelligence we received predicted what actually occurred,” the former Capitol Police Chief Steven A. Sund told senators. He called the riot “the worst attack on law enforcement and our democracy that I have seen” and said he witnessed insurrectionists assaulting officers not only with their fists, but also with pipes, sticks, bats, metal barricades and flagpoles.

He and two of the other officials — the former House sergeant-at-arms, Paul D. Irving, and his Senate counterpart, Michael C. Stenger, the top two security officials at the Capitol on the day of the assault — did acknowledge their own mistakes, as well. Mr. Sund admitted that his staff had never trained for such a wide-scale intrusion and lacked proper protective equipment.

Coming a month and a half after the siege, the testimony was the first high-profile public hearing in what is expected to be a lengthy series of investigations into the attack. It provided the most detailed account of the security mistakes leading up to — and during — the nearly five-hour siege during and after which five people died and nearly 150 officers were injured.

Senators deemed the lapses a “failure of imagination” to consider that hundreds of rioters would be willing to storm the Capitol — a refrain frequently invoked by officials nearly two decades ago to explain the security breakdown that led to the Sept. 11, 2001, attacks.

“There’s no question in my mind that there was a failure to take this threat more seriously, despite widespread social media content and public reporting that indicated violence was extremely likely,” said Senator Gary Peters, Democrat of Michigan and the chairman of the Homeland Security and Governmental Affairs Committee.

Former President Donald J. Trump was rarely mentioned during the nearly four-hour hearing, despite his perpetuation of the baseless claims of widespread election fraud and his encouragement of his supporters to march on the Capitol on Jan. 6 to pressure lawmakers to stop the certification of the presidential election. Senate aides said lawmakers coming off the impeachment this month wanted to focus more narrowly on security issues.

Clear disputes emerged among the officials about how they prepared for Jan. 6 and made decisions that day. The two sergeants-at-arms have come under scrutiny amid reports, including from Mr. Sund, that they acted too slowly in calling for the National Guard.

Mr. Irving said he rejected Mr. Sund’s account that he had turned down Guard support because of “optics,” calling the claim “categorically false.”

Mr. Irving also disputed Mr. Sund’s timeline of the events on Jan. 6 that indicated the former sergeant-at-arms had waited about a half-hour to contact political leaders about calling for the Guard.

Mr. Sund said he contacted Mr. Irving seeking Guard support at 1:09 p.m. Jan. 6. Mr. Irving said the call did not come until 1:28. He added that no Senate nor House leader slowed down a request for the Guard.

“Instead of cohesive leadership, we heard Stenger, Irving and former Chief Sund give contradicting accounts about the department’s handling of requests for backup from the National Guard,” Gus Papathanasiou, the chairman of the Capitol Police union, said after the hearing. “It’s maddening.”

The deployment of Guard troops has emerged as a point of contention, though the Pentagon did ultimately approve the request around 3 p.m. Officials have pointed out that even by the time the military received the request, it was too late for the Guard to prevent the rioting. Law enforcement officials have countered that every lost minute mattered.

Even as they disputed one another’s testimony, the witnesses were rarely confrontational. Only Mr. Sund was in the hearing room; the others participated by video. The hearing was the first time the public heard from Mr. Irving and Mr. Stenger, who both resigned after the attack.

Some Republicans have sought to play down the severity of the attack, including Senator Ron Johnson of Wisconsin, who falsely blamed “provocateurs” and “fake Trump protesters” for the violence. The witnesses knocked down such claims, repeatedly saying that the siege was planned, that rioters coordinated with one another and that white supremacists were involved.

“Ron Johnson has again engaged in a conspiracy theory,” Senator Amy Klobuchar, Democrat of Minnesota and the chairwoman of the Rules and Administration Committee, told reporters after the hearing. “That’s what he does.”

Neither F.B.I. nor Pentagon officials appeared at the hearing on Tuesday, but they are expected to testify next week as the homeland security and rules panels continue their joint investigation.

The bipartisan group of senators is moving ahead with oversight hearings as the House negotiates the formation of a 9/11-style commission to investigate the mob attack. House Republicans have resisted a proposal by Speaker Nancy Pelosi, Democrat of California, to form an independent, bipartisan commission, arguing that her blueprint would skew the panel toward Democrats.

Under Ms. Pelosi’s outline, according to two Democrats familiar with it, each of the top four congressional leaders would nominate two members and President Biden would name three, including the commission chairperson. Representative Kevin McCarthy of California, the Republican leader, has urged an even split between parties. 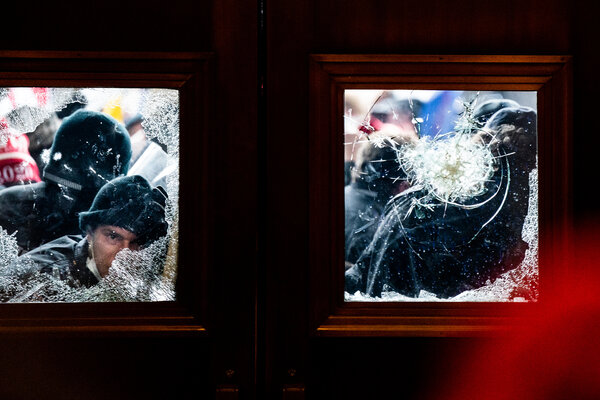 At the hearing, each of the three former Capitol security officials pointed to a breakdown in communication of some intelligence. The officials keyed in on an F.B.I. report from a field office in Norfolk, Va., that flagged an anonymous social media thread that warned of a looming war at the Capitol.

Mr. Sund testified that the F.B.I. report reached the Capitol Police the day before the attack, but not him directly. He said that an officer assigned to a law enforcement joint terrorism task force received the document and sent it to an unnamed intelligence division official on the force.

“It did not go any further than that,” Mr. Sund said.

Robert J. Contee III, the chief of Washington’s Metropolitan Police Department, who also testified, argued the F.B.I. should have more urgently flagged the information with a phone call, rather than an after-hours email.

From Riot to Impeachment

The riot inside the U.S. Capitol on Wednesday, Jan. 6, followed a rally at which President Trump made an inflammatory speech to his supporters, questioning the results of the election. Here’s a look at what happened and the ongoing fallout: