Before she dropped out of the 2020 presidential race, Vice President Harris said she supported changing the food pyramid to incentivize Americans to eat less red meat because of climate change.

A voter asked Harris if she supported changing the nation’s dietary guidelines to reduce consumption of red meat, alleging that climate change is linked to the “overproduction of red meat,” during a CNN town hall in September 2019.

“I think the point that you’re raising in a broader context, which is that, as a nation, we actually have to have a real priority at the highest level of government around what we eat and in terms of healthy eating because we have a problem in America,” Harris said. “We can talk about the subject of this conversation, we can talk about the amount of sugar in everything, we could talk about soda. We could go on and on.”

“So the answer is yes,” she continued. “I will also say this: the balance that we have to strike here, frankly, is about what government can and should do around creating incentives, and then banning certain behaviors. Just to be very honest with you, I love cheeseburgers from time to time, right? I just do. But there has to be also what we do in terms of creating incentives that we will eat in a healthy way, that we will encourage moderation, and that we will be educated about the effect of our eating habits on our environment. We have to do a much better job at that, and the government has to do a much better job at that.” 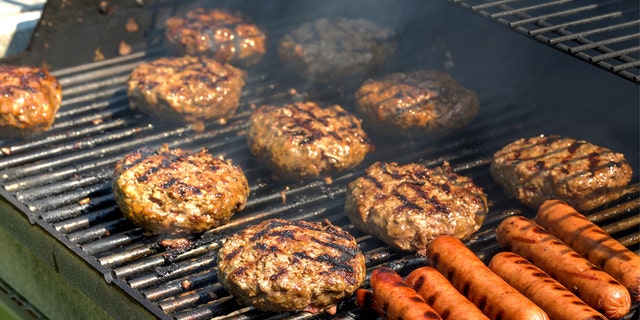 Burgers and hot dogs on the grill.
(iStock)

Republicans have claimed that Democrats, including President Biden, want Americans to cut their red meat consumption to combat climate change, something that Agriculture Secretary Tom Vilsack pushed back against.

“There is no effort designed to limit people’s intake of beef coming out of President Biden’s White House or USDA,” Vilsack said Monday, Politico reported. “Sometimes in the political world, games get played and issues are injected into the conversation knowing full well that there’s no factual basis.”