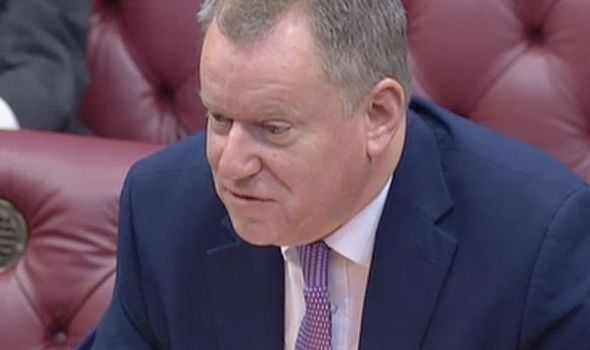 Speaking in Parliament, the Brexit minister said he was standing firm on his red lines in talks with the EU over the Northern Ireland Protocol.

Amid suggestions he has U-turned on plans to suspend the international treaty if no breakthrough is found before Christmas, he said there had been no change in his stance.

He told peers: “We are trying to reach an agreement, that’s always been our position.

“I would suggest our friends in the EU don’t interpret the reasonable tone that I usually use in my discussions with them as implying any softening in the substantive position.”

Lord Frost is currently locked in negotiations with the European Commission vice president Marcos Sefcovic to try and make the Protocol more sustainable in the long run.

The UK says the strict way in which it is being implemented by Brussels is having a detrimental impact on the UK’s internal market.

Under the terms of the Protocol, all shipments crossing the Irish Sea from Britain to Northern Ireland must undergo customs checks in order to prevent goods which do not meet EU rules from slipping into the single market via the land border with the Republic of Ireland.

The Government wants to see an end of customs checks for goods that are destined to remain in the North and not travel to the EU.

Ministers also want to see the European Court of Justice’s role in overseeing the mechanism removed.

Lord Frost has repeatedly said he is ready to trigger Article 16 of the Protocol to use the legal means to suspend the implementation of the international treaty if his demands are not met.

He has previously said he believed talks on Protocol should conclude in November, but media reports today suggested the Government was not willing to take action on Article 16 before Christmas.

Rejecting the claims today, Lord Frost said: “I would like to make our position on these negotiations and on Article 16 100 percent clear.

“Whatever messages to the contrary the EU may think they’ve heard or read, our position has not changed from the one I set out on November 10 or indeed in July at the time of the command paper.

“We would prefer to reach a negotiated agreement if we can, that is the best way forward for the stability and the prosperity of Northern Ireland.

“But I want to be clear that as the responsible minister, I would not recommend any outcome for the negotiations that I did not believe safeguarded political, economic, or social stability in Northern Ireland.

“In such circumstances we would obviously need to provide the necessary safeguards using Article 16 and those safeguards remain very much on the table and they are a legitimate provision in the Protocol.

“No decision has been taken to exclude or apply any specific timing for Article 16.

“That will be shaped by whether, and how quickly, negotiations make progress.”