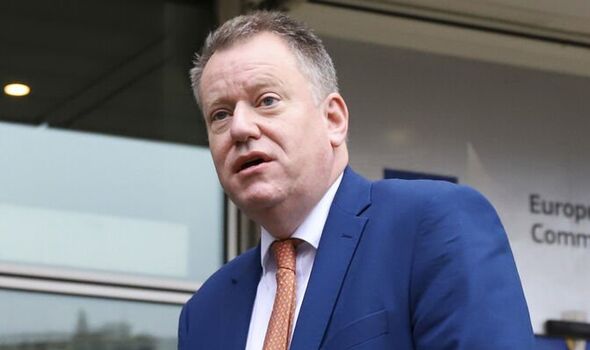 The former Brexit minister warned the move by Brussels would not “suit UK armed forces or UK taxpayers” as he laid out his opinions on the UK’s future relationship with the EU after its exit from the bloc. He tweeted: “UK ministers need to watch carefully the distinction between foreign policy cooperation & getting sucked in to the EU’s emerging defence industrial strategy.

“Many in Whitehall will want to join to get ‘influence’. But it won’t necessarily suit UK armed forces or UK taxpayers.”

Mr Frost’s warning comes after Director of Chatham House, Dr Robin Niblett, called for the UK to work with the EU in light of the Russia Ukraine war.

He urged the UK to repair its relations with the Brussels bloc, including the EU’s defence plans.

He told The Guardian: “The risk otherwise is that the UK could find itself excluded from deeper defence industrial and technological cooperation within the EU.

“A more specific UK–EU dialogue on security could also emerge from the Russia–Ukraine crisis. That could include the establishment of a sanctions review group that would ensure alignment on the timing and targets of sanctions, as well as conditions for their lifting.”