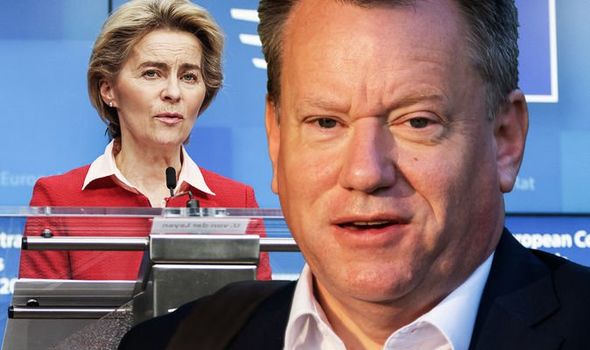 The cabinet office minister responsible for talks with the EU is set to open negotiations on the future of NIP later this week. It comes as senior Conservative MPs have been privately pressing Lord Frost to ditch the agreement altogether.

However, Downing Street has insisted that Lord Frost is not planning on scrapping the protocol but focussed on finding a way forward which works for both sides.

But a source close to him has acknowledged that it is “undermining the territorial integrity of the UK” and therefore must be changed.

The warning does open the door to it being ditched if the EU continues to refuse to compromise.

A senior government source said: “The way the Protocol is currently operating is undermining the territorial integrity of the UK. Trade patterns have changed and the level of day-to-day disruption is simply unsustainable.

“We need to deal with these fundamental problems and we are seeking significant change, but changes that will build on the foundations of the existing Protocol so it can deliver on its core objectives in a way that works for the people and businesses of Northern Ireland.

“We want to work at pace to reset UK/EU relations and deliver for Northern Ireland for the long term.”

The protocol came into place as a compromise to allow a final deal to be done on Brexit with the alternative solution rather than the whole UK being trapped in the customs union and barred from striking trade deals.

However, alternative interpretations of the protocol by the UK and EU have in effect created an unintended border in the Irish Sea hiving off Northern Ireland.

When temporary measures on food products come to an end there is a concern that supermarket shelves in Northern Ireland could be left empty.