WASHINGTON — Progressive activists who want Democrats to expand the Supreme Court and pack it with additional liberal justices are mustering a new argument: Republican-appointed jurists, they say, keep using their power to make it harder for Americans to vote.

Backed by a new study of how federal judges and justices have ruled in election-related cases this year, the activists are building on their case for why mainstream Democrats should see their idea as a justified way to restore and protect democracy, rather than as a radical and destabilizing escalation of partisan warfare over the judiciary.

The study, the “Anti-Democracy Scorecard,” was commissioned by the group Take Back the Court, which supports expanding the judiciary. It identified 309 votes by judges and justices in 175 election-related decisions and found a partisan pattern: Republican appointees interpreted the law in a way that impeded ballot access 80 percent of the time, versus 37 percent for Democratic ones.

The numbers were even more stark when limited to judges appointed by President Trump, who has had tremendous success at rapidly reshaping the judiciary. Of 60 rulings in election-related cases, 85 percent were “anti-democracy” according to the analysis.

“There is a systematic pattern of Republican-appointed judges and justices tipping the scales in favor of the G.O.P. by making voting harder,” said Aaron Belkin, a political-science professor and the director of Take Back the Court.

Edward Whelan, president of the conservative Ethics and Public Policy Center, questioned the value of reducing judicial decisions to statistics. Noting that many of the cases this year come from the aberrational circumstances of the pandemic — litigants are trying to get judges to relax local restrictions in light of the need for social distancing — he argued that showing deference to established rules does not necessarily mean hostility to voting.

“The idea that you are going to come up with feeble statistical evidence of judges acting partially, and you are going to use this as a reason to pack the court — to ensure that the Supreme Court acts partially in the direction you want — strikes me as weak,” he said.

Mr. Belkin argued that the study results should be seen as part of a larger critique of how American democracy has become “rigged” in favor of conservatives, entrenching minority rule of the country.

Even when Democrats enjoy the support of a majority of voters, they often still lose elections, he said: The Electoral College in presidential races and the Senate’s structure disproportionately empower conservative-leaning voters in sparsely populated states. He called that an undemocratic advantage augmented by partisan gerrymandering of House districts and by Republicans’ increasing imposition of voting restrictions that tend to impede groups that lean Democratic.

And even when Democrats do manage to win elections, he said, they have a harder time governing. Senate Republicans can use the filibuster to obstruct enacting new laws on matters like expanding health care or limiting greenhouse-gas emissions. If Democrats succeed in enacting new such laws or regulations anyway, Republicans turn to their allies in the judiciary to strike them down.

A majority of American voters cast their ballots to give Democrats the White House — and with it, the power to appoint judges — in all but one presidential election dating to 1992, and Democrats appear likely to win the popular vote for the fourth straight cycle next month. Nevertheless, conservative, Republican-appointed judges firmly control the judiciary.

That is because the Republican presidential candidate twice prevailed despite losing the popular vote — in 2000 and 2016 — and because Senate Republicans, empowered by low-population states, have used hardball tactics to block nominees by Democratic presidents, like Judge Merrick Garland in 2016, and then to rapidly confirm those put forward by Republican ones, as they are about to do with Judge Amy Coney Barrett. 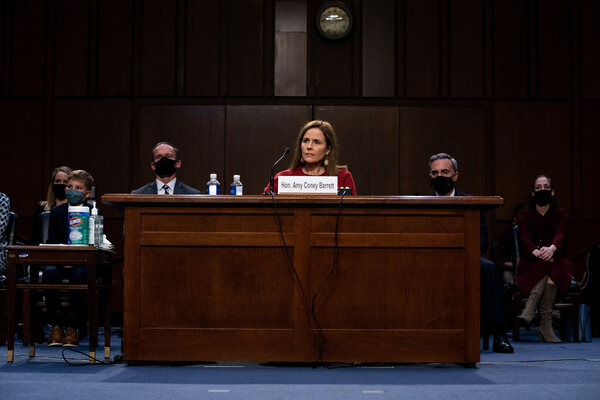 Against that backdrop, Mr. Belkin argued, the new data suggests that even if Democrats win both chambers of Congress and the White House next month and pass laws to make it easier for Americans to vote, like the first bill Democrats introduced after winning the House in the 2018 midterm, they could face a de facto veto by the judges the Republican Party has installed. And more generally, he argued, the entrenched power of that cohort appears likely to keep making it harder for future election outcomes to reflect the will of the majority.

Take Back the Courts declined to identify the political scientist who performed the study but is releasing its methodology and data set for scrutiny.

Mr. Belkin, who also runs the Palm Center, a social science research institute that focuses on gay, lesbian and transgender rights, said law students at Yale and Stanford checked the data set for accuracy under the oversight of a University of Michigan law professor, Leah Litman, who wrote an essay in The Atlantic last month discussing the partisan pattern in election-litigation cases.

The rulings included numerous challenges to state-imposed limits on ballot access that have come under scrutiny in light of the disruptions caused by the pandemic, including requirements to obtain signatures from other people and deadlines and other limits on absentee or mail-in ballots.

For example, in April the Supreme Court ruled, 5-4, to block extended voting in Wisconsin despite the coronavirus pandemic. All five justices in the majority were appointed by Republican presidents and all four in the dissent were Democratic appointees.

A similar pattern held at the district and appeals court level in cases as diverse as whether Georgia and Wisconsin must count absentee ballots postmarked by Election Day even if the post office delivers them a few days later, or whether it was constitutional for Texas governor, a Republican, to limit ballot drop-off sites to one per county.

By volume, most of the cases involved district court judges. But the pattern held when isolated to the 87 votes in the database by appellate judges: 81 percent of such rulings by Republican-appointed judges interpreted the law in a way that made it harder to access the ballot, versus 35 percent of rulings by Democratic-appointed judges.

Whether Democrats will try to expand the judiciary was a recurring theme at Judge Barrett’s confirmation hearings. On Monday, for example, Senator Ben Sasse, Republican of Nebraska, argued that changing the size and composition of the court would politicize the judiciary.

“Depoliticizing the court looks a lot like letting courts and judges do their jobs and the Congress do our job,” Mr. Sasse said. “You don’t like the policies in America? Great! Elect different people in the House and in the Senate and in the presidency. Fire the politicians at the next election.”

But Mr. Belkin argued that the American democratic process for deciding who should be elected to Congress and the White House is broken — and should the conservative tilt of the judiciary remain in place for the foreseeable future, it will amplify the problem.

“The data in this scorecard indicate the danger that federal courts pose to democracy,” Mr. Belkin said. “The only way to restore democracy and contain that danger is to reform federal courts.”