Home » Politics » GB News: Calvin Robinson calls for ban on ALL strikes and unions to be ‘cut down to size’

The conservative commentator told GB News that strikes, if legal, should be a “last resort, [not a] first”. Mr Robinson argued that the seven percent pay raise demanded by members of the Rail Maritime and Transport (RMT) union was “ridiculous”.

However journalist Rebecca Reid opened the discussion by arguing there were a number of misconceptions about the ongoing rail strikes.

Ms Reid argued that it wasn’t that the RMT wasn’t a good trade union but that other unions weren’t good enough.

She said: “I think there is a kind of disconnect between people who say ‘they’re overpaid, they’re not that important but we can’t run the country without them’. 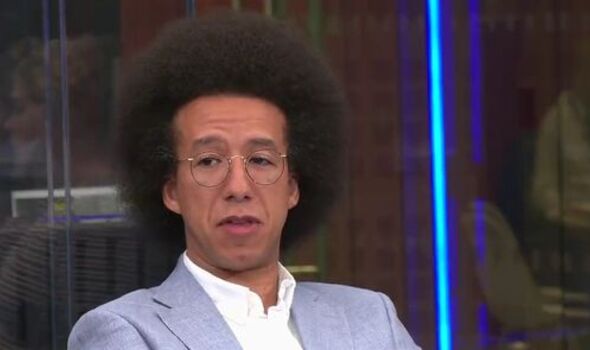 “Also people saying ‘on my god they’re on 60k this is ridiculous’.

“How do you think they got to 60k because their union is so good.

“The major issue here isn’t there too good, it’s that other people’s unions aren’t good enough.”

However Mr Robinson responded by arguing that trade unions are “too powerful”.

He replied: “The unions are too powerful, I think Rebecca’s right, they need to be cut down to size.

“I think a strike should be a last resort.

“Personally I don’t believe in strikes, I think we should ban them outright.

“But if they are going to use strikes it should be a last resort not a first resort.

“I find it very difficult to find out what they are after, I looked on some left wing websites to find out and they want a seven percent pay rise.

“I think they’ve been offered two percent which is what most of us get, if we get anything at all.”

He continued by berating their demands: “Seven percent is ridiculous, if they get a seven percent pay rise that’s going to affect customers.

“If it’s public sector taxes will go up, if it’s private sector ticket prices will go up.”

Rebecca Reid responded by arguing that train fares already go up an “extraordinary amount” every year without pay increases for railway workers.

She added: “Ticket prices have gone up an extraordinary amount every single year and none of that has been passed on to the people who actually work there.

“I agree that trains are expensive. Renationalise the railways.”