ATLANTA — Even though Gov. Brian Kemp has already certified Georgia’s 16 electoral votes for Joseph R. Biden Jr., his fellow Republicans plan to hold a pair of State Senate committee hearings Thursday that are likely to dig into the question of whether the state’s election was, as President Trump falsely puts it, “rigged.”

The lawmakers will not fulfill Mr. Trump’s ultimate wish, expressed in a tweet earlier this week: that enough proof of fraud will be uncovered for him to prevail. But Georgia, perhaps more than any other state in the nation, continues to be haunted by a sort of zombie campaign to produce a Trump victory, one month after Election Day.

Many of the state’s Republicans continue to expend significant effort — and contort themselves into political pretzels — to navigate the president’s outrage that he lost the state, in the hope of demonstrating to his supporters that they are doing all they can to ferret out any trace of fraud to back Mr. Trump baseless claims.

The effort, which also encompasses numerous lawsuits and an influential far-right disinformation campaign, will not change the election result, barring some Hail Mary upending of a race that has already been certified. But it may have other powerful consequences for the political future of Georgia — and by extension, the nation, given Georgia’s unquestionable new status as a battleground state.

For some Republicans, the most urgent concern is that the president’s ongoing effort to undermine faith in the election process will depress conservative turnout in the all-important Jan. 5 runoff races for the seats held by Georgia’s Republican U.S. senators, David Perdue and Kelly Loeffler. That anxiety has only increased as Mr. Trump persists in his attacks on the state’s voting integrity. 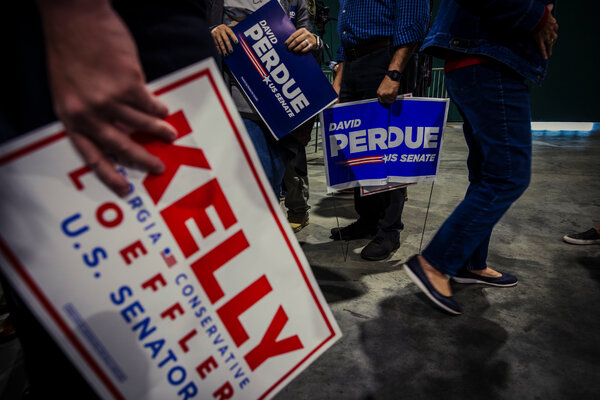 On Wednesday, a group of 19 prominent Georgia Republicans — among them former Gov. Nathan Deal and two former U.S. senators, Saxby Chambliss and Johnny Isakson — issued an open letter warning that the focus on fraud allegations could “detract” from the runoffs, which will determine which party controls the U.S. Senate.

“We have watched with increasing concern as the debate surrounding the state’s electoral system has made some within our party consider whether voting in the coming runoff election matters,” they wrote, warning that if Republicans did not turn out in full force, “the trajectory of our State and Nation will be irreparably altered on January 5th.”

Their concerns came to life Wednesday afternoon at a park in the upscale Atlanta suburb of Alpharetta, where hundreds of Trump supporters gathered, waving American flags and Trump flags, to cheer two lawyers who have challenged the Georgia election results in federal court, Sidney Powell and L. Lin Wood.

Mr. Wood later addressed state officials while making the case that the Georgia process was too corrupt to participate in. “We’re not going to vote on your damned machines made in China,” he said. Ms. Powell, who has been disavowed by Mr. Trump’s legal team but continues to press legal challenges on the president’s behalf, echoed Mr. Wood’s warning, urging “all Georgians” not to vote “unless your vote is secure.”

But in other ways, the momentum seemed to turn against Mr. Trump this week. On Tuesday, a top state election official, Gabriel Sterling, laced into the president, pleading with him to scale back the conspiratorial rhetoric that Mr. Sterling said was inspiring people to make violent threats against election workers.

On Wednesday, Mr. Sterling’s boss, Secretary of State Brad Raffensperger — like Mr. Sterling, a Republican — seemed to close the door on the president’s long-shot hopes of subverting the vote of the people. Noting that the U.S. attorney general, William P. Barr, had just said that the Justice Department found no widespread fraud in the national race, Mr. Raffensperger said, “Our investigators have seen no widespread fraud either.”

He added that a second recount of Georgia ballots, set to be finished by midnight Wednesday, would show that Mr. Biden was indeed the winner. And the secretary of state notably referred to Mr. Biden as the president-elect.

At the same time, political expediency is a significant factor. Mr. Raffensperger, who is up for re-election in 2022, is one of a number of top Georgia Republicans who are bending their actions to two diverging imperatives: defending the integrity of their state’s election while trying to survive the bizarre and evolving political weather systems generated by the mercurial Mr. Trump.

The president may spout conspiracy theories and acrimony — he has publicly attacked Mr. Raffensperger and Mr. Kemp for not acceding to his wishes — but he is also the most popular figure in the Republican Party. Nationally, Mr. Trump’s sustained assault on voting integrity, while false, has persuaded many Republicans that there was something crooked about the election. And no one is sure whether, or for how long, he will continue to command the fealty of his party.

Still, on Wednesday, even as Mr. Raffensperger declared that Mr. Trump had lost, he made it clear that he was still a Trump man at heart: “We wish that our guy would have won the election,” he said, “but it doesn’t look like our guy has won the election.”

Mr. Kemp, who is also up for re-election in 2022, has followed a similar strategy. On Monday, in a tweet, Mr. Trump called Mr. Kemp “hapless” and urged him to intervene in the election. That same day, Mr. Kemp’s campaign sent out an email declaring that Georgia Republicans “must unite as a Party to advance President Trump’s bold, conservative agenda.”

But the fact remains that Mr. Raffensperger and Mr. Kemp have refused to give Mr. Trump what he wants most: an opening that would allow the results to be overturned (Mr. Kemp has not only certified the state’s 16 electors; he has also refused to call a special session of the legislature, which people like Mr. Wood have demanded, and where the election results could ostensibly be overturned).

Brian Robinson, a Republican political consultant in Georgia, said Mr. Kemp and Mr. Raffensperger “are facing a much different political calculation today than Loeffler and Perdue.”

“They have time for the politics to change,” he said of Mr. Kemp and Mr. Raffensperger. “Loeffler and Perdue don’t. They have to respond to the politics of the minute, of the second.”

Aside from trying to assuage Mr. Trump, Republicans in Georgia also appear to be laying the groundwork for new limits on voting, and particularly on absentee voting. Mr. Trump has baselessly claimed that there was something fraudulent about the signature-matching system election officials used to verify the identities of absentee voters.

That concern has been echoed by Mr. Kemp, who has called for a sample audit of signatures on absentee ballot envelopes from the recent election. Mr. Raffensperger, meanwhile, has opened an investigation into whether get-out-the-vote groups encouraged nonresidents to send in absentee ballot applications; the groups include the New Georgia Project, founded by Stacey Abrams, a former Democratic candidate for governor.

To the left, this smacks of voter suppression — a charge Ms. Abrams often brought against Mr. Kemp when he was secretary of state and presided over his own gubernatorial contest with Ms. Abrams in 2018.

Thursday’s meetings of the State Senate’s judiciary subcommittee and government oversight committee are being billed as efforts to study Georgia’s election laws and take suggestions for what can be done to improve the way elections are conducted. The committee, on its agenda, is inviting “anyone with firsthand knowledge of problems with the election or fraudulent activity relative to the election” to “submit sworn statements of fact.”

At the rally, Mr. Wood, the lawyer, told the crowd to meet him at the state Capitol on Thursday morning.

When Mr. Trump arrives in Georgia two days later to stump for Mr. Perdue and Ms. Loeffler, Republicans praying for a return to unity are hoping he plays nice, going light on the conspiracy theories and focusing on the Senate races.

“I would be highly surprised and very disappointed,” Mr. Chambliss, the former senator, said in an interview, “if Donald Trump came to Georgia this weekend and had any comments that weren’t positive about any Republican politician.”