Home » Politics » GOP Still Fattening Trump’s Wallet, Even Though It Doesn’t Have To Anymore

PALM BEACH, Fla. ― Donald Trump can no longer force the party that he until recently ran to direct donor money into his wallet, but this weekend he has managed to get his hands on a sizable chunk of it anyway.

The former president, who was impeached a record second time for inciting a violent mob to attack the U.S. Capitol on Jan. 6 in his last-ditch attempt to hold on to power, could collect as much as a quarter-million dollars for hosting his own speech to the Republican National Committee’s major donors Saturday evening at Mar-a-Lago, his members-only swimming, tennis and croquet club.

“You’ve got to hand it to him,” joked one major party donor, who spoke on condition of anonymity because he has not decided if he wants to support a Trump presidential run in 2024.

“President Trump is a powerful leader in the party. When you’re a former president and you have a large following, you can make certain demands to participate,” said one RNC member, who also spoke on condition of anonymity. “A lot of the donors are very pleased to have the opportunity to go there. Other potential 2024 candidates might not like it, but that’s the reality here.”

The ongoing Republican spending at Mar-a-Lago follows on the self-dealing pattern Trump began when he locked up the GOP nomination in spring 2016. And if Republican donors do, indeed, enjoy visiting what is now Trump’s residence, it is a liking they only appear to have developed in recent years.

Over the five years from May 2011 through May 2016, Republican federal candidates and committees spent just $17,066 at Mar-a-Lago ― and more than 90% of that was by the Allen West Guardian Fund, run by the former Florida congressman who was by then a Fox News contributor.

Over the subsequent five years, starting in May 2016, that total increased more than 69-fold, to $1,179,686, according to a HuffPost review of Federal Election Commission filings.

“To succeed and do well in the Republican Party, you must prostrate yourself before the king,” said Joe Walsh, a former GOP congressmen who ran against Trump for the 2020 presidential nomination. “It will be this way at least through 2024, probably for as long as the king lives.”

Exactly how much the RNC is spending for use of the banquet hall and catering at Mar-a-Lago will not be publicly available until at least mid-May, when the party must file a report with the FEC detailing its contributions and expenditures for April.

The bulk of the party’s spring “donor retreat” is taking place at the nearby Four Seasons hotel, as it has for a number of years. Only supporters who give five- and six-figure amounts each year are invited, and they get to listen to presentations by party political staff about the coming elections as well as hear from potential presidential candidates. This year that group includes Sen. Rick Scott of Florida, Trump’s former secretary of state Mike Pompeo, South Dakota Gov. Kristi Noem, Sen. Tom Cotton of Arkansas and Florida Gov. Ron DeSantis. Others featured speakers include South Carolina Sen. Lindsey Graham, House GOP Leader Kevin McCarthy and former Trump White House aide Kellyanne Conway. 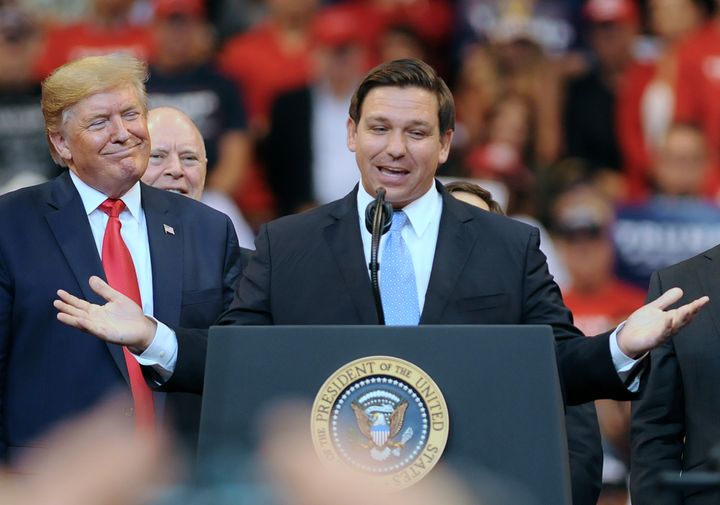 Only Trump, though, will be addressing the 400 or so attendees at his own for-profit business, although DeSantis will share the stage with him and RNC chair Ronna McDaniel. Party officials did not respond to HuffPost queries about why it agreed to let Trump personally profit off of his remarks.

“I’m sure it helps Trump, but I think it helps the RNC, too,” the GOP donor said, citing the party’s numerous fundraising emails and texts to raise money from small-dollar contributors by raffling off a trip to the dinner.

During the years of his presidency, Trump had the RNC and his campaign spend $8.5 million in donor money at his own businesses, according to a HuffPost review of FEC records. That included $639,031 at Mar-a-Lago.

In 2018, for example, Trump had the RNC hold an evening dinner and a luncheon the following day at Mar-a-Lago as part of the donor retreat. The party ended up paying him $286,919.

Republican candidates and committees outside Trump’s control spent an additional $2 million at his properties during his four years in office, according to the HuffPost review, and that pattern is continuing, notwithstanding Trump’s deep unpopularity in the nation as a whole.

Trump spent weeks attacking the legitimacy of the Nov. 3 election after he had lost, lying that it had been “stolen” from him and that he had actually won in a “landslide.” Those falsehoods continued through a long string of failed lawsuits challenging the results in a handful of states. After the Electoral College finally voted on Dec. 14, making Democrat Joe Biden’s win official, Trump began urging his followers to come to Washington on Jan. 6 to intimidate his own vice president and Congress into overturning the election results and installing Trump as president for another term anyway. The mob he incited attempted to do just that as it stormed the Capitol. His supporters even chanted “Hang Mike Pence” after Pence refused to comply with Trump’s demands.

Despite this, Republican candidates have beaten a path to Trump’s new home to hold fundraising events, despite its high costs compared with other venues. Sen. Mike Lee of Utah kicked it off on Feb. 20, and has been followed by Noem, DeSantis, Trump’s former press secretary and Arkansas gubernatorial candidate Sarah Huckabee Sanders, former Trump staffer and Ohio congressional candidate Max Miller and, on Friday, Sen. Marco Rubio of Florida.

Rubio’s event was supposed to draw only 25 donors, each contributing the maximum $2,900, so it’s unclear how much it will net ― if anything ― for his 2022 reelection campaign after deducting Trump’s fees.

“I don’t think it’s about the money,” said one top GOP consultant, also on condition of anonymity. “It’s a signal to the base that they’re still on the team.”

Politically oriented nonprofits are also holding events at Mar-a-Lago and other Trump properties, resulting in payments that may never be known publicly. Women for America First, the group that planned and staged the pre-insurrection rally near the White House on Jan. 6, is holding a “Save America Summit” at Trump’s golf resort near the Miami airport this weekend, while former South Carolina Sen. Jim DeMint’s Conservative Partnership Institute held an event at Mar-a-Lago this week. The institute is a 501(c)(3) charity, meaning taxpayers indirectly subsidize its activities, but neither group ever has to disclose how much it is paying Trump.

Walsh said Republicans’ embrace of Trump has the trappings of a cult and that he has no wish to belong to it any longer.

“It is scary,” he said. “It’s why someone like me is through forever in Republican politics. Because I can’t support any Republican who supported Trump in 2020.”