This year’s presidential nominating conventions served to confirm many voters’ opinions about Joe Biden and Donald Trump, according to two HuffPost/YouGov polls taken after the Democratic and Republican gatherings.

The core audience for each convention was the party faithful ― politically engaged voters who were predisposed to take a friendly view of the events. About three-quarters of the voters who reported following the Republican National Convention “very closely” were Republicans or leaned toward the Republican Party, the poll found, while 81% of the voters who paid similar levels of attention to the Democratic National Convention were Democrats or Democratic-leaning independents. Relatively few were persuadable voters: In both polls, the number of undecided voters who reported that they’d followed the convention fell far below the minimum sample size necessary for reporting their views.

People’s self-reported recollections of how their opinions have shifted, of course, generally deserve a grain of salt. In this instance, much of the difference seems to stem from the degree to which each nominee further riled his opponents: Republican voters who followed the DNC mostly said it left their views of Biden unchanged, while a majority of Democratic voters who paid some attention to the RNC said it worsened their views of Trump. 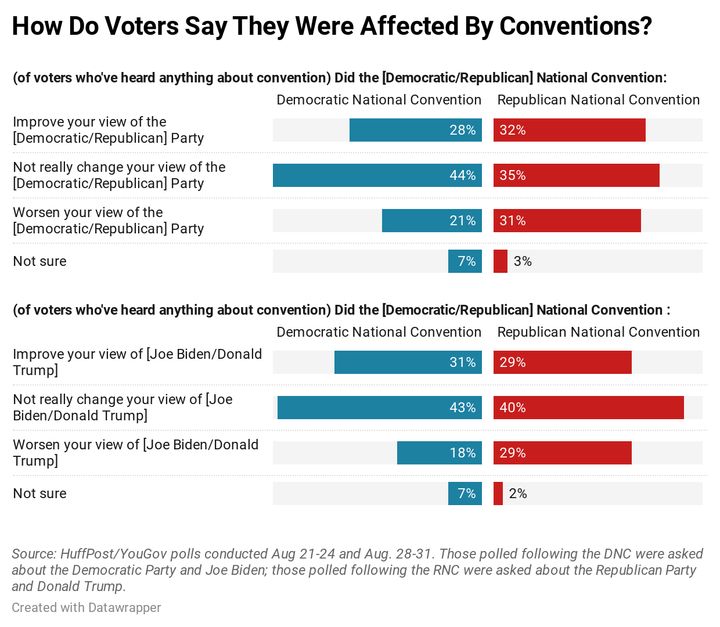 Voters who’d heard anything about the RNC said by a 20-point margin that it was well-managed, rather than poorly run. Voters who’d followed the DNC said the same of it by a 23-point margin. About a quarter of voters who followed the DNC said its digital format was better than the usual format, with 22% calling it worse and roughly a third saying it was about the same.

Both conventions were perceived as going negative. Voters said, 33% to 18%, that Democratic convention speakers spent more time attacking Trump than explaining what Biden would do as president; another 24% said they devoted equal time to both. By 31% to 24%, voters said speakers at the Republican convention devoted more time to attacking Biden than laying out what Trump would do if reelected, with 23% saying they spent equal time on both.

The main message of the Democratic Convention, a 38% plurality said, was to vote for Biden in order to get Trump out of office ― a finding that aligns with many Biden supporters’ self-described rationale for their votes. Another 21% said the main message was about Biden’s competence as a leader, with 11% saying the convention focused on his personal character and 7% on his political policies. The rest didn’t see any of those as the takeaway from the convention or said they weren’t sure.

Asked about the RNC, voters were close to evenly split over whether the messaging focused mostly on Trump’s leadership (29%) or on preventing Biden from getting in office (27%). Another 14% saw the convention messaging as more focused on Trump’s political policies, with just 5% saying it focused on his personal character. 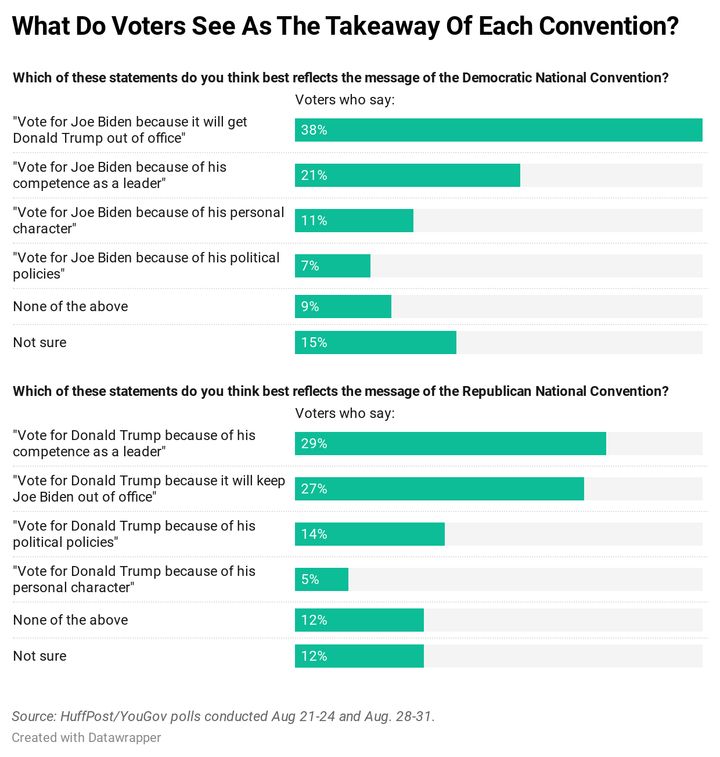 It’s still too soon to know exactly what effect, if any, the conventions will have on the presidential race. Conventions often give each party consecutive bumps in the polls, but this year’s effects could be muted for a number of reasons: not only the coronavirus pandemic but also the relative stability of the race and the back-to-back scheduling of the two events. As more post-convention polling comes out, it’ll paint a clearer picture of the state of the race heading into the fall.

Use the widget below to further explore the results of the HuffPost/YouGov post-DNC survey, using the menu at the top to select survey questions and the buttons at the bottom to filter the data by subgroups:

Use the widget below to further explore the results of the HuffPost/YouGov post-RNC survey, using the menu at the top to select survey questions and the buttons at the bottom to filter the data by subgroups:

HuffPost has teamed up with YouGov to conduct daily opinion polls. You can learn more about this project and take part in YouGov’s nationally representative opinion polling. More details on the polls’ methodology are available here.