Home » Politics » Hickenlooper Exits as O’Rourke Presses On: This Week in the 2020 Race

Here’s our quick weekly catch-up on the presidential campaign and the field of 24 — well, make that 23 — candidates for the Democratic nomination.

On Tuesday, my colleague Reid J. Epstein reported that former Gov. John Hickenlooper of Colorado was talking to Democrats about ending his presidential bid and entering the race for his state’s Republican-held Senate seat.

Two days later, Mr. Hickenlooper announced his 2020 campaign was over. And he left the door open to a Senate run.

Colorado is a purple battleground state, and flipping the seat currently held by Senator Cory Gardner is all but mandatory if Democrats hope to have any chance of retaking the Senate.

Recent polling showed Mr. Hickenlooper with a more than 50-point lead over the current Democratic front-runners in the Senate race; it also showed him ahead of Mr. Gardner by 13 percentage points in a head-to-head matchup. But Mr. Hickenlooper, like some other candidates in the presidential race, has not professed enthusiasm about a down-ballot contest.

Mr. Hickenlooper is the second candidate to withdraw from the Democratic presidential field since it expanded significantly in the spring; Representative Eric Swalwell of California exited the race in July. 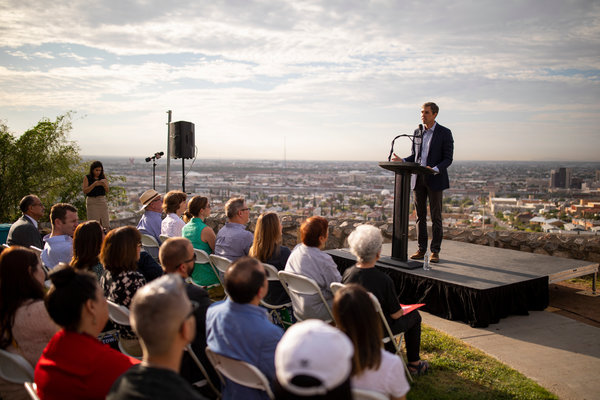 After 22 people were shot to death at an El Paso Walmart this month, former Representative Beto O’Rourke quickly returned to his hometown to grieve with and support his friends and neighbors.

And while some Democrats expressed support for his White House bid, others took note of his campaign’s struggles and pressed Mr. O’Rourke to focus on Texas and run against Senator John Cornyn in the 2020 election.

But in an interview with The Times’s Katie Glueck, Mr. O’Rourke said he was even more determined to pursue the Democratic nomination and oppose Mr. Trump.

On Thursday, his campaign announced a reset.

Mr. O’Rourke told my colleague Alex Burns that he would abandon the relatively traditional approach he had taken and instead plan his political activities around taking on Mr. Trump in direct and personal terms.

“I just have to be as clear and as strong as possible in calling this out and taking the fight to Donald Trump,” Mr. O’Rourke said.

Stacey Abrams says she’s not running for president, but…

Stacey Abrams, who drew national attention during her unsuccessful run for governor of Georgia last year, made it official this week: She will not run for president in 2020.

But in an interview Tuesday night with The Times’s Astead W. Herndon, she said she was open to being considered for vice president by “any nominee.”

Ms. Abrams said she would focus her next year on identifying and stemming voter suppression efforts throughout the country. But she has remained close to the presidential race, meeting privately with several candidates.

“I’ve been thinking about this for the last few weeks,” she said, “and I’ve just come to the decision that my best value add, the strongest contribution I can give to this primary, would be to make sure our nominee is coming into an environment where there’s strong voter protections in place.” 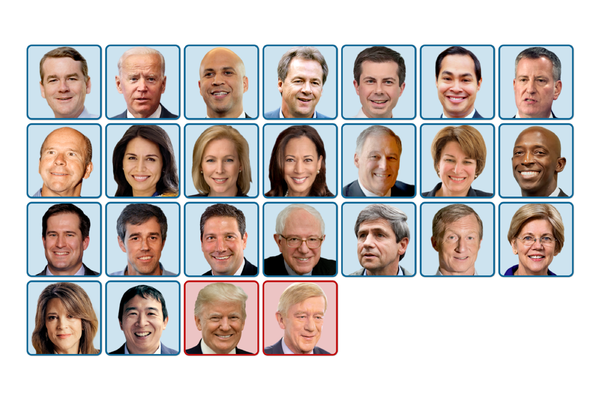 Who’s in, who’s out and who’s still thinking.

Recapping the weekend in Iowa

Our reporters seemed to be in every corner of Iowa last weekend — at the state fair, at a gun violence forum and elsewhere — keeping tabs on the 20 Democrats who had come to do some retail politicking in the key early voting state.

Here’s a roundup of some of what they reported:

At a forum in Des Moines, the candidates voiced support for a common set of gun control proposals, like requiring universal background checks and banning military-style semiautomatic rifles.

At the state fair, Senator Bernie Sanders of Vermont “examined the butter cow” and “gobbled a corn dog” but, as my colleague Sydney Ember put it, “spoke to almost no one” as he walked around. (Like others, he did draw a large crowd for his political speech.) Mr. Sanders’s approach underscored how he has grounded his campaign in championing ideas rather than establishing human connections.

In our politics newsletter, Lisa Lerer provided some takeaways from her four days at the fair. Among them: The race has firmly separated into tiers, and Senator Elizabeth Warren of Massachusetts is having a moment.

So who “won” the Iowa State Fair? We rated the candidates by corn dogs. If that seems confusing, just trust me: This is the best thing you’ll read today.

A new proposal to tax the rich

A Democratic candidate heartily endorsed new taxes on the wealthiest Americans this week. And no, it was not Ms. Warren or Mr. Sanders.

The former housing secretary Julián Castro rolled out his expansive “People First Economic Plan for Working Families” on Thursday, a suite of new proposals aimed at providing relief to working families. A pair of new wealth taxes would help fund the commitments and are central to the plan.

The first, an “inherited wealth tax,” would replace the estate and gift taxes with a federal tax on inherited incomes of more than $2 million. Mr. Castro’s team said such a tax would raise more than $250 billion over 10 years.

The second tax, a “wealth inequality tax,” would apply to the top tenth of the top 1 percent of earners. Under the tax, capital income would be treated the same as labor income.

Mr. Castro also promised to repeal the tax cuts passed under the Trump administration, to more than double the child tax credit to $3,000 and to increase the earned-income tax credit.

Among the other Democrats calling for new taxes on the richest Americans, Ms. Warren has proposed a wealth tax that would target the 75,000 wealthiest families in the United States and levy an additional surtax on billionaires. Mr. Sanders has introduced legislation that would increase the number of wealthy Americans subject to the estate tax.

Ms. Warren released her plan on curbing gun violence. She said she would use the president’s executive powers to require background checks and close loopholes. She also promised to send Congress legislation that would create a federal gun licensing system, ban assault weapons and increase taxes on gun manufacturers, among other measures.

Ms. Warren also put forth a policy agenda aimed at supporting Native American communities, ahead of a scheduled appearance on Monday at a presidential forum on Native American issues. As we noted in our article on the proposals, her campaign has been dogged by the controversy over her claims of Native American ancestry.

Senator Kamala Harris of California said that if elected, she would take executive action to require major online gun sales platforms to perform background checks. She also pledged to create a “Domestic Terrorism Prevention Order,” which would allow law enforcement officials to petition a federal court to temporarily seize the gun of a suspected terrorist.

Mayor Pete Buttigieg of South Bend, Ind. released a plan for rural America in which he promised to fund “innovation clusters,” apprenticeship programs and a public-private partnership that would help train manufacturing entrepreneurs. The plan also calls for an “internet for all” initiative, higher salaries for teachers at rural schools and a “rural opportunity center” that would streamline the grant process in rural communities.

The entrepreneur Andrew Yang unveiled a plan aimed at “restoring democracy.” He said he would eliminate super PACs and provide every American voter with $100 in “Democracy Dollars” that could be used to support any candidate. He also argued for ranked-choice voting, an end to partisan gerrymandering, term limits and other measures.

Matt Stevens is a political reporter based in New York. He previously worked for The Los Angeles Times, covering drought, water and the city’s west side. @ByMattStevens