New emails are a reminder that Hunter Biden had corruption ‘surrounding him’: Solomon

Twitter is suppressing an official press release from the House Judiciary Committee Republicans after they reposted verbatim the New York Post story that purportedly showed emails between Hunter Biden, the son of Democratic vice presidential candidate Joe Biden, and a Ukrainian energy executive indicating that the younger Biden introduced the executive and the then-vice president. 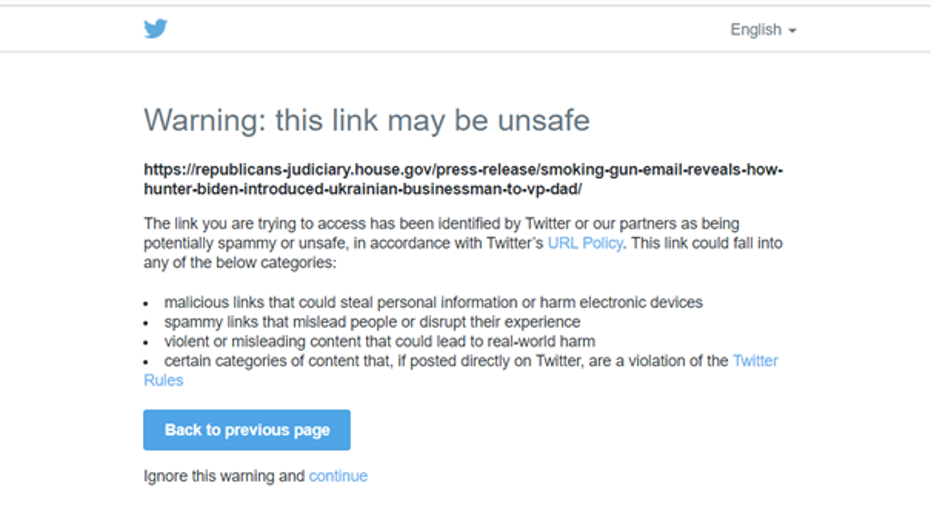 The warning that appears when clicking on the House Judiciary Committee Republicans’ press release that includes the New York Post Hunter Biden story.

When clicking on the House Judiciary Republicans' press release that included the New York Post story, the same warning appears that Twitter placed on the original New York Post link on Wednesday. The warning says that "this link may be unsafe" and that it "has been identified by Twitter or our partners as being potentially spammy or unsafe."

Further, when trying to direct message the House Republicans' press release, which is posted with an official ".gov" URL, users' messages are blocked from being sent. Twitter in that case shows users a message that says "This request looks like it might be automated. To protect our users from spam and other malicious activity, we can’t complete this action right now. Please try again later." 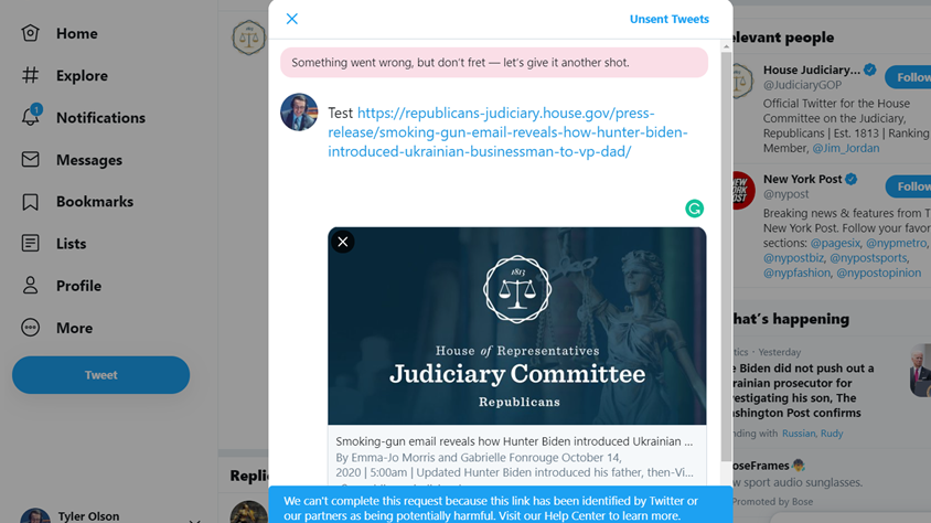 Twitter is also blocking users from tweeting the link to the press release. In that case, Twitter tells users "We can't complete this request because this link has been identified by Twitter or our partners as being potentially harmful. Visit our Help Center to learn more."

The House Judiciary Republicans' press release was initially hailed by those on the right as a clever way to get around Twitter's suppression of the New York Post story. But Twitter is now suppressing that press release.

These are the same actions that Twitter took against the original link to the New York Post story that was shared in the Republicans' press release. But the fact Twitter is now suppressing a press release from a group of members of Congress goes a step further than suppressing a story from a news organization.

The Judiciary Republicans, after realizing that their press release had been suppressed by Twitter, shortly after 9 a.m. Thursday put the New York Post story on the website of Ranking Member Jim Jordan, R-Ohio. As of shortly before 10 a.m. Thursday that link was not being suppressed.

Twitter on Wednesday said that it took action against the New York Post article shared by the House Judiciary Committee Republicans and one other because "The images contained in the articles include personal and private information — like email addresses and phone numbers — which violate our rules" and violate the social media company's "Hacked Materials Policy."

When it initially prevented the story from being shared, however, Twitter did not make clear why it was taking those actions. Twitter CEO Jack Dorsey said late Wednesday that the fact the company did not initially disclose why it was suppressing the news story was "unacceptable."

"Our communication around our actions on the @nypost article was not great. And blocking URL sharing via tweet or DM with zero context as to why we’re blocking: unacceptable," Dorsey said.

Neither Dorsey nor the @TwitterSafety account which publicly explained why it was suppressing the New York Post story addressed the fact it was also suppressing the House Republicans' press release. Neither Twitter nor the House Judiciary Committee Republicans immediately responded to a request for comment from FOX Business.