Study finds AOC is among the least effective representatives

Fox Nation host Tomi Lahren and Celtic Strategies co-founder Kevin Walling react to a study that shows Rep. Alexandria Ocasio-Cortez as being one of the least effective lawmakers in the House.

The website — named “Socialist Give Back” — lists 26 House Democrats who received donations from Ocasio-Cortez, accusing them of supporting some of their party’s most liberal policies.

“Every vulnerable Democrat who refuses to give back donations from Alexandria Ocasio-Cortez is complicit in her socialist agenda that wants to defund the police, open our borders and raise taxes,” Michael McAdams, a spokesperson for the National Republican Congressional Committee, said in a statement to Fox News. 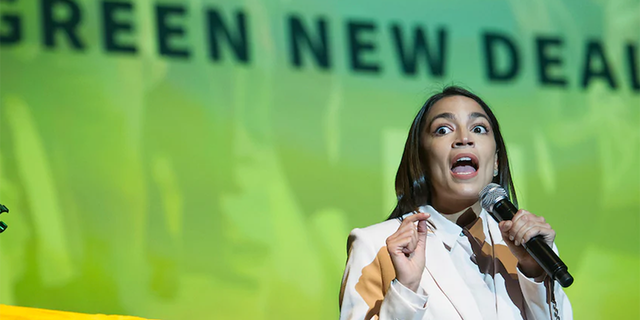 Ocasio-Cortez, a progressive firebrand and a lightning rod for criticism on the right, gave $5,000 donations to some of her colleagues to help keep the House majority ahead of what’s expected to be a tough election cycle for Democrats.

The New York Democrat made the donations, which came through her Courage to Change leadership PAC, without directly contributing to the Democratic Congressional Campaign Committee, with which she’s publicly feuded. DCCC aides gave lawmakers’ wire transfer information to Ocasio-Cortez’s aides without the approval of more senior officials, according to Politico, which first reported the news.

The other Democrats who returned the money include Reps. Conor Lamb, D-Pa., Elissa Slotkin, D-Mich., and Carolyn Bourdeaux, D-Ga., and Ron Kind-D-Wis.

House Republicans fared much better than expected in the 2020 election, flipping about 15 seats — decimating Speaker Nancy Pelosi’s majority — and putting them on track to win back control of the chamber in 2022. After the death of Florida Rep. Alcee Hastings earlier this month, Democrats hold a very precarious six-seat majority, one of the thinnest margins in decades.

In the week after the election, Democrats traded blame over who’s ultimately responsible for the lackluster showing, in which the party lost a number of freshmen representatives who won during the 2018 midterm election, partly by reaching into districts that former President Trump had won in 2016.

Moderates have pointed fingers at their colleagues who embraced the “defund the police movement” and for not pushing back harder against socialism, while progressives, led by the four congresswomen known as the “Squad,” including Ocasio-Cortez, argued those liberal policies help to galvanize the party’s core base and are popular among the general electorate.

Ocasio-Cortez is one of the Democrats’ top fundraisers, raking in close to $2.8 million in the first three months of this year. Pelosi, by comparison, raised about $4 million over that same time period.