The 2020 elections marked the highest voter turnout in US history, with Biden capturing more than any candidate has ever recorded.

While just four years apart, the voting demographics differed in many ways between 2016 and 2020. Biden hoped to improve upon Democratic nominee Hillary Clinton's performance in every way, and exit polls reveal he captured more young voters, more moderates, and more suburban voters, among other voting blocs.

Following the November election, Republicans currently have 50 seats in the Senate compared to the Democrats' 48 seats. Two Senate runoff elections will take place in Georgia in January. If Democrats win both seats, they would flip the Senate with Vice President-elect Kamala Harris serving as the tiebreaking vote, and they'd be in control of both the executive and legislative branches of the federal government.

Though a number of races have yet to be called, the Democratic Party maintained its majority in the House of Representatives, but not without their losses. Republicans flipped at least eight seats, and that number may grow after additional votes are counted in New York and a recount in Iowa.

These nine maps and charts show who propelled Biden to victory, and how it compares to Trump's win in 2016.

The electoral vote count from 2016 to 2020 basically flipped. 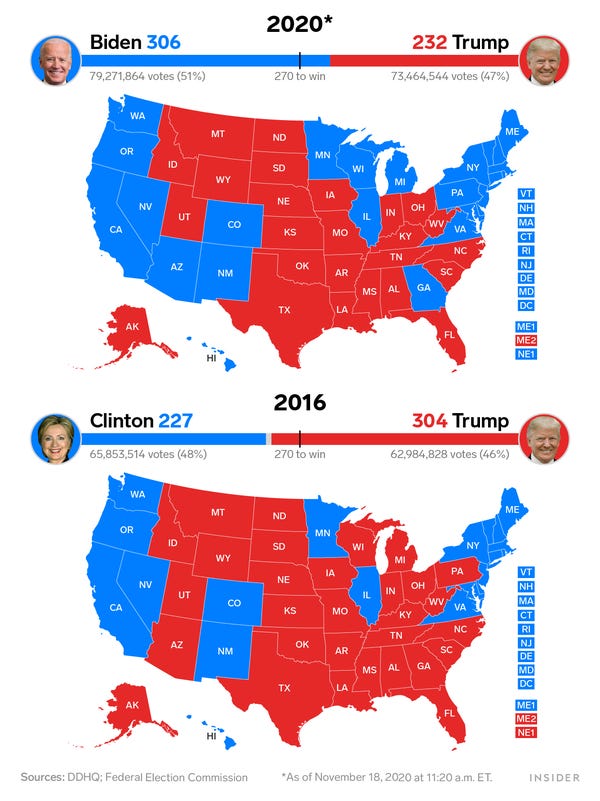 Following the end of President Barack Obama's two terms in the White House, Clinton matched up against a surprisingly resilient Republican nominee: Trump.

Trump's chance for reelection in 2020 was soured by Biden, who amassed an inverse of 2016's original electoral college results and won 306 votes to Trump's 232.

To win, Biden flipped Pennsylvania, Wisconsin, Michigan, Georgia, Arizona, and Nebraska's 1st Congressional District. Biden is the first Democrat to flip Georgia since President Bill Clinton in 1992 and the first to win in Arizona since 1996.

Biden has already won more votes than any presidential candidate in US history.

While Republicans claimed a majority after the 2016 election, two Senate runoff races in Georgia will determine which party holds control over the legislative body in 2021. 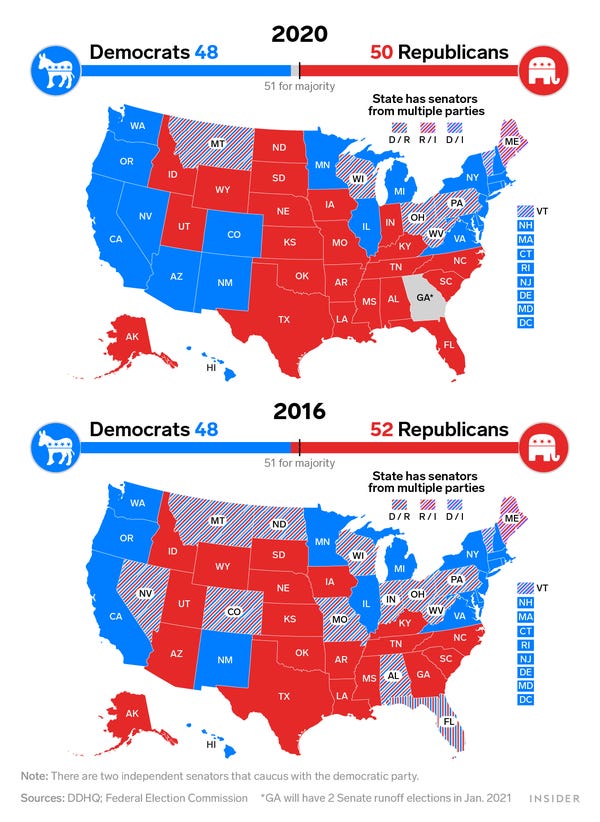 In the 2016 US Senate elections, Republicans maintained control of the Senate with a 52-48 majority over the Democratic Party and gave Vice President Mike Pence the tiebreaking vote for the GOP as the president of the Senate.

In 2020, Democrats were expected to make major gains, but GOP senators held up stronger than anticipated, defending seats in highly competitive races in Maine, North Carolina, and South Carolina, among others. Democrats flipped seats in Colorado and Arizona and could hold a majority in the Senate if the two Democratic candidates, Rev. Raphael Warnock and Jon Ossoff, win the two Georgia runoffs in January. 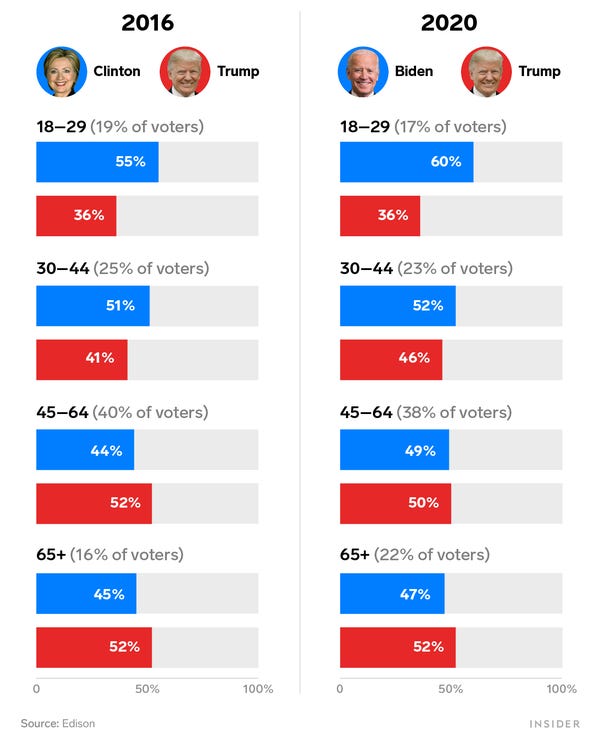 Biden bested Clinton's performance in every age-related voting group in 2020, only allowing Trump to gain ground among 30-44-year-olds.

Older voters made up a larger percentage of the total vote in 2020 than in 2016, with voters 65 years old and above amounting to 22% of the final vote, or six percentage points more than in 2016.

Notably, Biden gained two percentage points of support from voters in the oldest voting demographic after steadily gaining their support following raucous debates and Trump's handling of the COVID-19 pandemic.

Cities overwhelmingly voted Democrat in both elections, while rural voters chose Trump. The suburbs swung from Trump in 2016 to Biden in 2020. 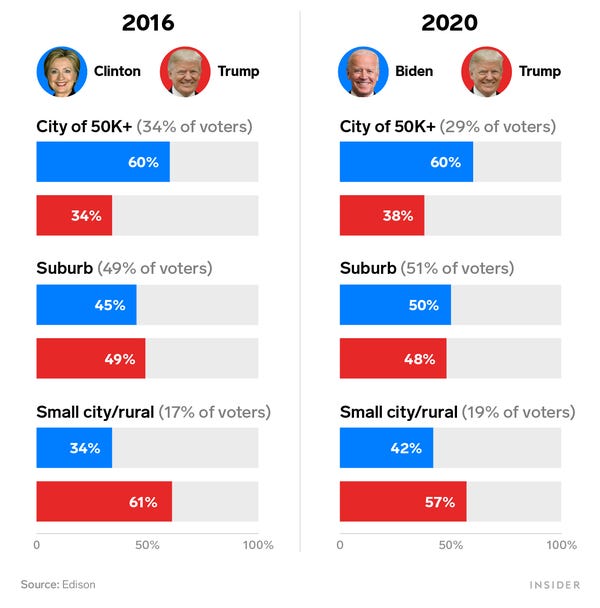 As voters' education levels increase, they're more likely to vote for Clinton or Biden instead of Trump. 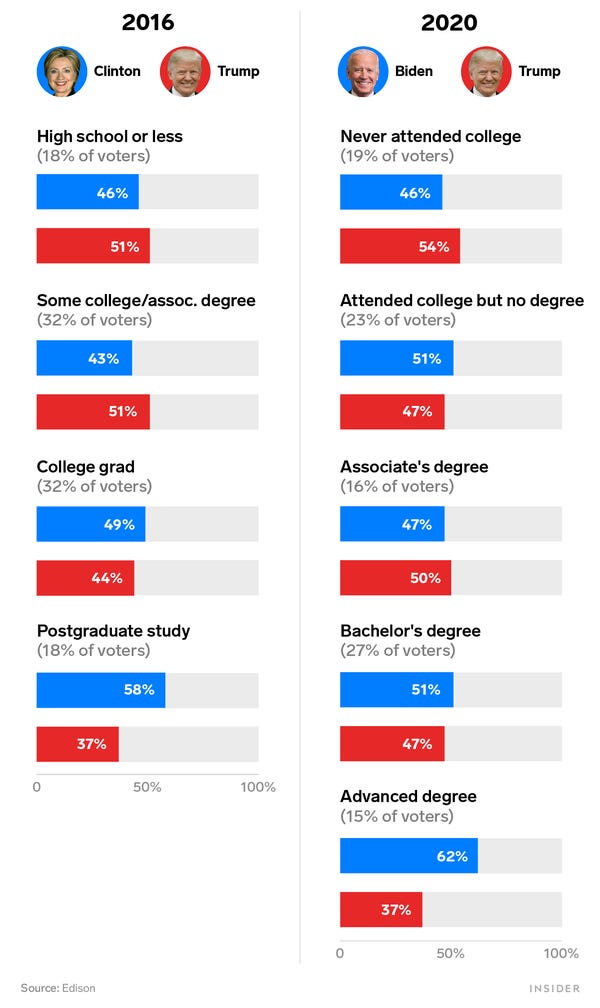 Trump gained around three percentage points of support among voters who have never attended college, a demographic with which Biden failed to make gains in 2020.

But Biden performed remarkably better than Trump in 2020 among voters with an advanced degree. The Democratic nominee received an estimated 62% of the vote from post-graduate degree holders, a full 25 percentage points higher than Trump with 37%. 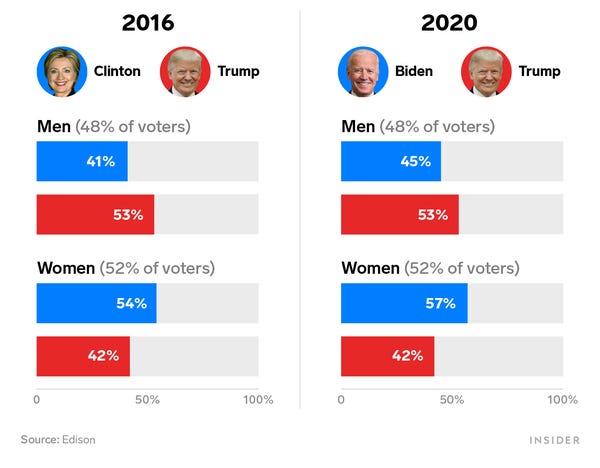 While Trump maintained similar levels of support from both men and women in 2016 and 2020, Biden managed to make gains over Clinton's share.

In 2020, Biden received an estimated three additional percentage points of votes from women than Clinton did in 2016 when she became the first female presidential candidate on a major political party's ticket.

Though small, Biden also gained one percentage point of support from male voters across the US.

Black women overwhelmingly voted for the Democratic nominee in both elections, as did other voters of color. But Trump captured the majority of both white women and white men. 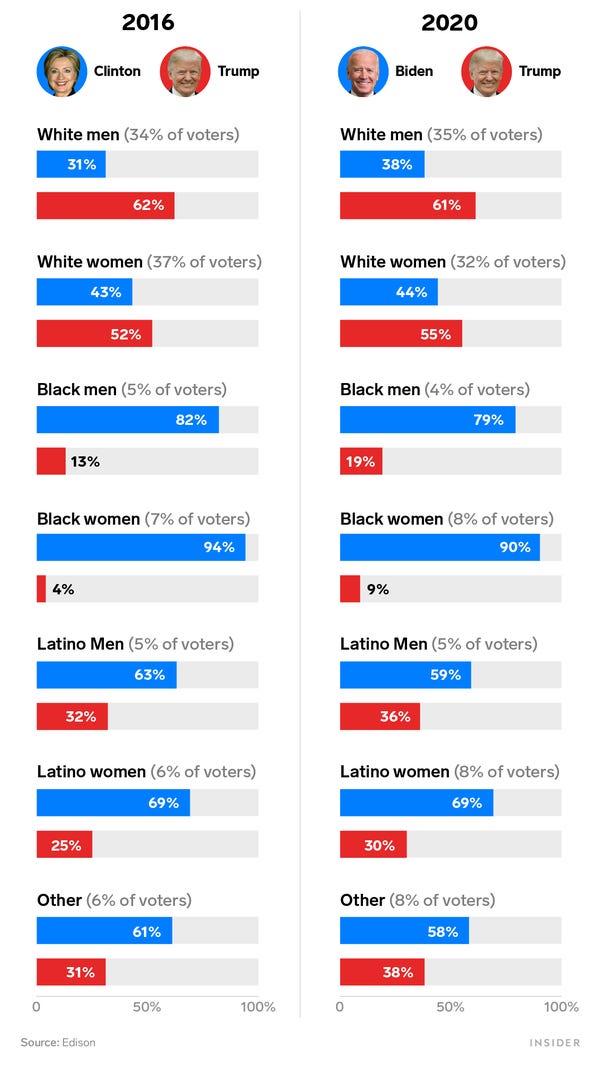 Following a Trump presidency that saw an increase in anti-immigration rhetoric and policy, experts paid close attention to Biden's performance among Hispanic voters, which he appeared to be lacking in the final months leading up to the election.

While Clinton received votes from an estimated 63% of male Latino voters, Biden actually lost ground and won only 59% in 2020, which all but eliminated his chance of flipping the major battleground states of Florida and Texas. Trump also gained an additional percentage point of support from male Latino voters in 2020, further cementing his gains among the demographic. But where Trump made gains among some of the highest-earning voters, Biden received 11 percentage points in additional support from voters with family incomes between $50,000 and $99,999, skyrocketing over Trump by a 15 percentage point margin. In 2016, Trump and the Republican Party won the group over by three percentage points, 49% to 46%.

Predictably, partisan voters cast their ballots along party lines. But many more moderate voters chose Biden over Trump in 2020, helping to propel the Democratic nominee to victory. 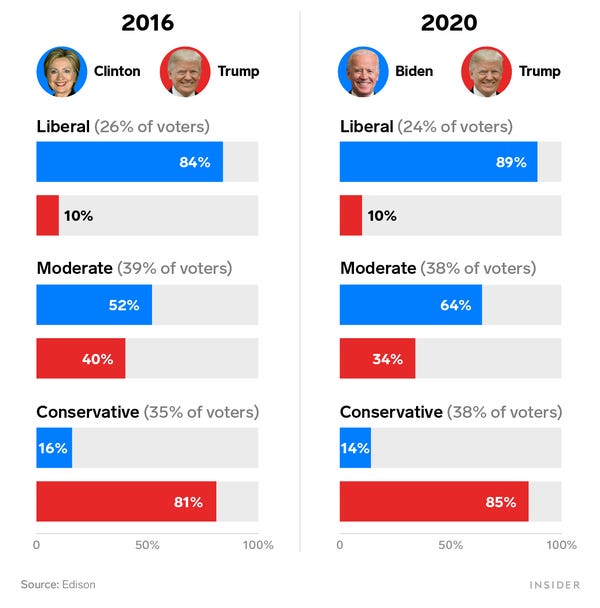 Additionally, conservative voters were four percentage points more likely to vote for Trump in 2020 than they were in 2016. Similarly, Biden captured five more percentage points than Clinton had among liberal voters.