In Cleveland County, Okla., the chairman of the local Republican Party openly wondered “why violence is unacceptable,” just hours before a mob stormed the U.S. Capitol last week. “What the crap do you think the American revolution was?” he posted on Facebook. “A game of friggin pattycake?”

And this week in Virginia, Amanda Chase, a two-term state senator running for the Republican nomination for governor, maintained that President Trump might still be sworn into a second term on Jan. 20 and that Republicans who blocked that “alternative plan” would be punished by the president’s supporters.

“They’ve got Mitch McConnell up there selling out the Republican Party,” Ms. Chase, who spoke at the protest in Washington last week, said in an interview. “The insurrection is actually the deep state with the politicians working against the people to overthrow our government.” 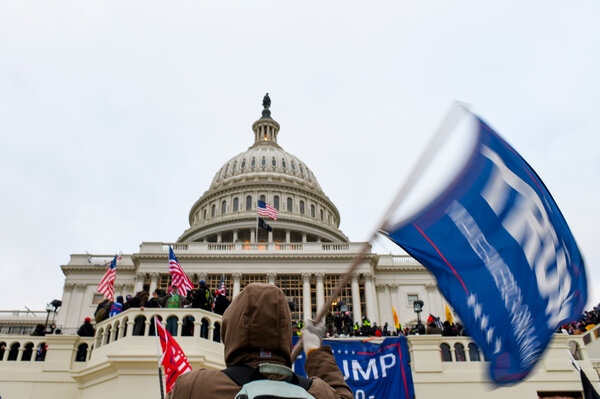 As Mr. Trump prepares to exit the White House and face a second impeachment trial in the Senate, his ideas continue to exert a gravitational pull in Republican circles across the country. The falsehoods, white nationalism and baseless conspiracy theories he peddled for four years have become ingrained at the grass-roots level of the party, embraced by activists, local leaders and elected officials even as a handful of Republicans in Congress break with the president in the final hour.

Interviews with more than 40 Republican state and local leaders conducted after the siege at the Capitol show that a vocal wing of the party maintains an almost-religious devotion to the president, and that they don’t hold him responsible for the mob violence last week. The opposition to him emerging among some Republicans has only bolstered their support of him.

And while some Republican leaders and strategists are eager to dismiss these loyalists as a fringe element of their party, many of them hold influential roles at the state and local level. These local officials not only serve as the conduits between voters and federal Republicans, but they also serve as the party’s next generation of higher-level elected officials, and would bring a devotion to Trumpism should they ascend to Washington.

The continued support for the president threatens to maintain Mr. Trump’s influence long after he leaves office. That could hamper the ability of the party to unify and reshape its agenda to help woo back moderate suburban voters who play a decisive role in winning battleground states and presidential elections.

At the same time, stepping away from the president could cost the party his supporters — millions of new working-class voters who helped Mr. Trump capture more votes than any other Republican presidential candidate in history.

“It is priority No. 1 to retain Trump voters,” said Harmeet Dhillon, an R.N.C. member from California. “There is no way to do that with rapid change, tacking in a different direction. Voters are looking to the party for continuity and to stay the course.”

An Axios-Ipsos poll released Thursday showed that a majority of Republicans support the president’s recent behavior and say he should be the Republican nominee in 2024.

Already, some from the Trump wing are threatening primary challenges to Republicans deemed insufficiently loyal to the president and fierce opposition to any Republican who works with the new Biden administration. With Mr. Trump banned from prominent social media platforms, they’re immersing themselves in right-wing media outlets and waiting for new conservative social media platforms many say are being set up.

“The party is definitely with Trump,” said Debbie Dooley, a conservative activist in Georgia. “I’m seeing anger but it’s kind of nuanced. There are people that are angrier at these Republicans that have turned their backs on Trump than they are at Democrats.”

That was evident shortly after 10 Republicans joined with Democrats to support impeachment on Wednesday. Within hours of the vote, Drew McKissick, the chairman of the South Carolina Republican Party, blasted out a statement attacking Representative Tom Rice, a Republican from his state who had backed impeachment.

“We completely disagree with this sham and to say I’m severely disappointed in Congressman Tom Rice would be an understatement,” said Mr. McKissick.

Several House Republicans also called for Representative Liz Cheney of Wyoming, a high-profile voice for impeachment, to step down from her leadership position in the party’s caucus.

Anthony Sabatini, a Florida state representative, described Ms. Cheney and other Republicans who voted for impeachment as “artifacts,” saying they’re out of step in a party that has embraced a more populist platform opposed to foreign interventions and skeptical of free trade.

“She’s like a fossil,” he said of Ms. Cheney. “The party is completely and totally realigned. Mitt Romney wouldn’t win in a primary today. He would not be able to be elected dogcatcher today.”

For years, opponents to Mr. Trump argued that he would lose his hold on the party after a devastating event — like unrest or violence that would shock the nation. Last week’s breach of the Capitol appears to have presented that opportunity to Republicans who want to refocus the party around Mr. Trump’s policies, and dispense with the polarizing rhetoric and divisive unrest that marked his four years in office.

But for many grass-roots Republicans, the episode at the Capitol was not the inflection point that some Republicans in Washington assumed it would be.

“No, Trump does not have any blame, but the Democrats certainly do, along with all the Republicans that follow with them,” said Billy Long, the Republican Party chairman in Bayfield County, Wis., who said he is planning to break away from the G.O.P. to start a local Trump-centric third party. “The Trump movement is not over; like Trump said himself, we are just getting started.”

From Riot to Impeachment

The riot inside the U.S. Capitol on Wednesday, Jan. 6, followed a rally at which President Trump made an inflammatory speech to his supporters, questioning the results of the election. Here’s a look at what happened and the ongoing fallout: