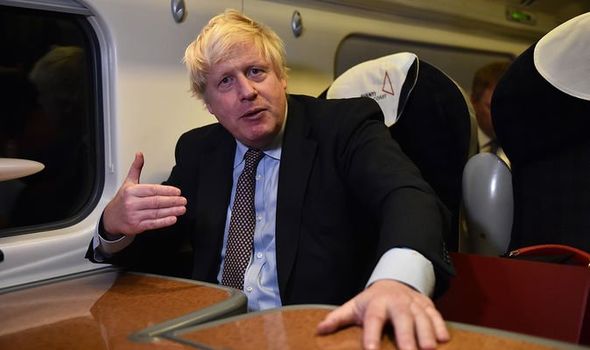 He said the “monumental” £96billion plan for the North would fire up economies and spread opportunity across the UK. And he dismissed critics’ claims of broken promises as “total rubbish”.

Tens of billions of taxpayers’ money will also be saved with the scrapping of the HS2 high-speed rail line’s Leeds project.

Transport Secretary Grant Shapps said the Integrated Rail Plan (IRP) would create a much-needed overhaul of inter-city links across the North and Midlands.

He said “Our plan will deliver a network that is fit for passengers today and for future generations ‑ a network that works for every community and every passenger, right across the UK.”

Labour leader Sir Keir Starmer said: “This was the first test of ‘levelling up’ and the Government has completely failed and let down everybody in the North.”

The IRP will axe the HS2 extension from the East Midlands to Leeds, with HS2 trains instead running on existing lines.

The Northern Powerhouse Rail (NPR) route between Leeds and Manchester will be a mixture of new track and improved existing infrastructure.

There are also plans to fully electrify the Midland Main Line and the TransPennine route and upgrade the East Coast Main Line.

At a Network Rail logistics hub near Selby, North Yorkshire, yesterday, the Prime Minister said: “Of course there are going to be people who always want everything at once.

“And there are lots of people who are [going to] say, ‘Look, what we should do is carve huge new railways through virgin territory, smashing through unspoilt countryside and villages and do it all at once’.

“The problem with that is those extra high-speed lines take decades and they don’t deliver the commuter benefits that I’m talking about.We will eventually do them.”

Mr Shapps said the 110 miles of new high-speed line would slash journey times and insisted that under the original proposals, HS2 would not have reached the region until the 2040s.

However, he said the revised plan would bring forward passenger benefits by “at least a decade”.

Mr Shapps added: “This plan will bring the North and the Midlands closer together, it will fire up economies to rival London and the South-East, it will rebalance our economic geography, it will spread opportunity, it will level up the country.”

He said his constituents would be delighted HS2’s eastern arm had been scrapped, saying: “It was a damaging and destructive thing for South Yorkshire that would have given us no benefits.”

He said: “It would be much easier politically to carry on with HS2, but today’s announcement will give better service to more people.

Cleethorpes MP Martin Vickers declared the plan was a “good balance between what was hoped for and what can actually be achieved”.

Harry Fone, of the TaxPayers’ Alliance, said: “Taxpayers will be relieved that a big chunk of the HS2 white elephant has finally been scrapped.

“HS2 has been a complete disaster with costs soaring, timescales slipping and billions of pounds wasted.”

But several MPs blasted some cuts, including scaling back the new TransPennine rail route between Manchester and Leeds.

The Department for Transport said improvements to the line would cut journey times from 55 to 33 minutes ‑ just four minutes slower than it would have been with NPR ‑ while costing £18billion less.

But Bradford had expected to be included on the planned Leeds to Manchester route and have a station to accommodate new trains.

Tory MP Robbie Moore, who represents nearby Keighley, said the plan had “completely short-changed” his constituents.

He said: “We are one of the most socially deprived parts of the UK and we must get better transport connectivity.”

And Tory MP Craig Tracey told the Commons it was “really difficult” to share the optimism in the announcement because it was “very disappointing to hear that HS2 will not be scrapped in full”.

Andy Bagnall, of the Rail Delivery Group representing train operators, said: “While millions of people will benefit from this major investment, leaving out key pieces of the jigsaw will inevitably hold back the ability for the railways to power the levelling-up agenda and the drive to net zero.”

There’s a lot to welcome here and electrification of the Midland Main Line and TransPennine routes will bring faster, more reliable and greener trains.

Contactless integrated ticketing has worked well in London for years, so it’s good that this will be rolled out in the Midlands and the North.

Passengers in Nottingham and Sheffield will get better times from London and Birmingham, Manchester will be just 33 minutes from Leeds and the proposed mass transit system for the West Yorkshire area is badly needed.

Railfuture has long advocated the smart alternative of connecting HS2E to East Midlands Parkway rather than bypassing Nottingham and Sheffield.

However, Bradford misses out badly. There seems to be no hope of improving the poor service from there to London.

Some train journeys will still be slower than they were a century ago. And there have been no funding commitments yet, except £200million for the Leeds metro, although some of that money seems to be for electrifying Leeds to Bradford.

There remains a rather critical question mark over how to connect Leeds.

Northern MPs of all political persuasions are very unhappy. If Boris Johnson can indeed deliver more for less, then so much the better, but it prompts the question of why previous plans were such poor value for money.

Bruce Williamson is campaigner at Railfuture