Home » Politics » ICE left an immigrant mother and her 6-month-old infant stranded at a bus stop after reuniting them, lawyers allege 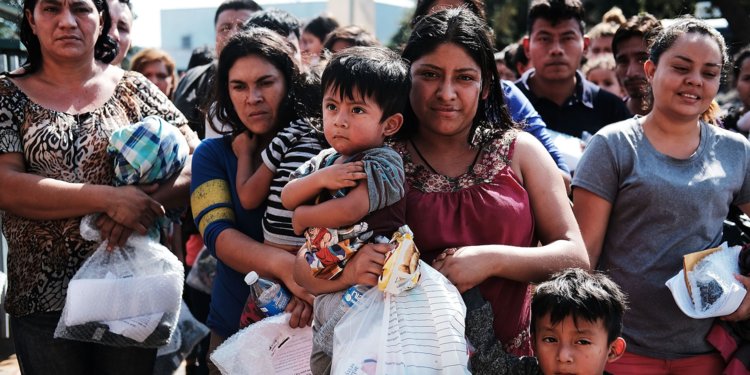 Dozens of women, men and their children, many fleeing poverty and violence in Honduras, Guatemala and El Salvador, arrive at a bus station following release from Customs and Border Protection on June 23, 2018 in McAllen, Texas.
Getty Images/Spencer Platt


The Trump administration’s lack of communication about its efforts to reunite thousands of immigrants it separated at the border in recent months has caused “significant problems” for the parents and children involved, the American Civil Liberties Union alleged in a court filing.

Immigration and Customs Enforcement even left one mother stranded at a bus stop with her children — one of whom was six months old — after reuniting them this week, the ACLU said in a joint status report filed Thursday. The mother made a series of phone calls to her attorney and another advocate, and eventually obtained a bus ticket at midnight.

The government said Friday it had reunited 58 of the youngest 103 immigrant children with their parents, but the lawyers and organizations assisting the families said they weren’t given notice of where, when, and how those reunifications would take occur.

The Trump administration is now attempting to reunite the more than 2,000 other, older immigrant children who were separated from their parents.

At a court hearing on Friday, US District Judge Dana Sabraw said that providing advance notice of reunifications to the parents, lawyers, or advocates involved is a matter of “common sense and common courtesy.” He added that families shouldn’t be reunited, then abandoned by with no resources or people to assist them.

“Someone is making decisions about who’s getting reunified and what time and where, and that can be communicated,” Sabraw said. “There shouldn’t be anything mysterious about it. It should be transparent and easy to do … It’s not a difficult assignment, it’s just laborious.”


‘The government will make it happen’

The ACLU had cited in its documents three particularly “troubling situations,” including the mother at the bus stop.

In one father’s case, the ACLU alleged that authorities transported him through a series of ICE facilities in New Jersey and Michigan without informing his lawyer.

Another mother who was set to be reunited with her children was held in an ICE office for most of the day, but after a computer malfunction interfered with her processing, officers told the mother she’d be sent back to detention without her children, according to the ACLU.

ICE declined to comment on the allegations, referring Business Insider to the Justice Department. But a government lawyer said in court Friday that the Justice Department doesn’t know about the three scenarios and would need to look into them, but that the reunification process for the remaining thousands of older children being reunited in the coming weeks will “be different and will allow information to be provided differently.

The government lawyer said that, in the future, reunifications will occur on a “rolling, regular basis” within certain ICE facilities. Sabraw ordered that the government provide at least 12 hours notice of the time and locations of each family’s reunification.

Sabraw also said that due to being “improperly separated” by the Trump administration, the families shouldn’t be asked to pay the costs of reunification. He said the government should cover expenses such as the parents’ travel tickets or the DNA tests being used to match children with their parents.

Though the Justice Department’s lawyer argued that such a demand was “a huge ask” and that the government agencies involved didn’t have enough resources, Sabraw was firm.

“Let’s proceed with the understanding that the government will make it happen,” he said.