Home » Politics » In Congress, Republicans Shrug at Warnings of Democracy in Peril

WASHINGTON — Senator Christopher S. Murphy concedes that political rhetoric in the nation’s capital can sometimes stray into hysteria, but when it comes to the precarious state of American democracy, he insisted he was not exaggerating the nation’s tilt toward authoritarianism.

“Democrats are always at risk of being hyperbolic,” said Mr. Murphy, Democrat of Connecticut. “I don’t think there’s a risk when it comes to the current state of democratic norms.”

After the norm-shattering presidency of Donald J. Trump, the violence-inducing bombast over a stolen election, the pressuring of state vote counters, the Capitol riot and the flood of voter curtailment laws rapidly being enacted in Republican-run states, Washington has found itself in an anguished state.

Almost daily, Democrats warn that Republicans are pursuing racist, Jim Crow-inspired voter suppression efforts to disenfranchise tens of millions of citizens, mainly people of color, in a cynical effort to grab power. Metal detectors sit outside the House chamber to prevent lawmakers — particularly Republicans who have boasted of their intention to carry guns everywhere — from bringing weaponry to the floor. Democrats regard their Republican colleagues with suspicion, believing that some of them collaborated with the rioters on Jan. 6.

Republican lawmakers have systematically downplayed or dismissed the dangers, with some breezing over the attack on the Capitol as a largely peaceful protest, and many saying the state voting law changes are to restore “integrity” to the process, even as they give credence to Mr. Trump’s false claims of rampant fraud in the 2020 election.

They shrug off Democrats’ warnings of grave danger as the overheated language of politics as usual.

“I haven’t understood for four or five years why we are so quick to spin into a place where part of the country is sure that we no longer have the strength to move forward, as we always have in the past,” said Senator Roy Blunt of Missouri, a member of Republican leadership, noting that the passions of Republican voters today match those of Democratic voters after Mr. Trump’s triumph. “Four years ago, there were people in the so-called resistance showing up in all of my offices every week, some of whom were chaining themselves to the door.”

For Democrats, the evidence of looming catastrophe mounts daily. Fourteen states, including politically competitive ones like Florida and Georgia, have enacted 22 laws to curtail early and mail-in ballots, limit polling places and empower partisans to police polling, then oversee the vote tally. Others are likely to follow, including Texas, with its huge share of House seats and electoral votes.

Because Republicans control the legislatures of many states where the 2020 census will force redistricting, the party is already in a strong position to erase the Democrats’ razor-thin majority in the House. Even moderate voting-law changes could bolster Republicans’ chances for the net gain of one vote they need to take back the Senate.

And in the nightmare outcome promulgated by some academics, Republicans have put themselves in a position to dictate the outcome of the 2024 presidential election if the voting is close in swing states.

“Statutory changes in large key electoral battleground states are dangerously politicizing the process of electoral administration, with Republican-controlled legislatures giving themselves the power to override electoral outcomes on unproven allegations,” 188 scholars said in a statement expressing concern about the erosion of democracy. 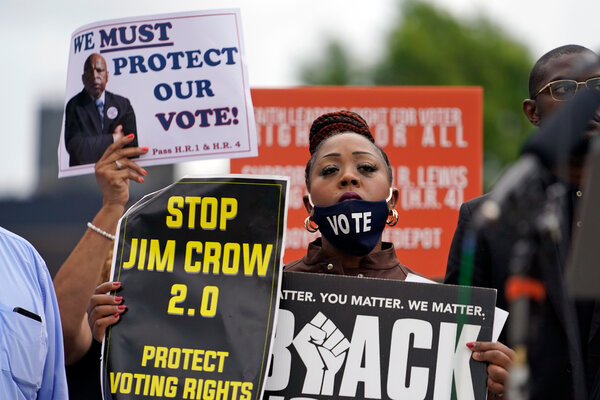 Senator Angus King, an independent from Maine who lectured on American politics at Bowdoin College before going to the Senate, put the moment in historical context. He called American democracy “a 240-year experiment that runs against the tide of human history,” and that tide usually leads from and back to authoritarianism.

He said he feared the empowerment of state legislatures to decide election results more than the troubling curtailments of the franchise.

“This is an incredibly dangerous moment, and I don’t think it’s being sufficiently realized as such,” he said.

Republicans contend that much of this is overblown, though some concede the charges sting. Senator Patrick J. Toomey, Republican of Pennsylvania, said Democrats were playing a hateful race card to promote voting-rights legislation that is so extreme it would cement Democratic control of Congress for decades.

“I hope that damage isn’t being done,” he added, “but it is always very dangerous to falsely play the race card and let’s face it, that’s what’s being done here.”

Mr. Toomey, who voted to convict Mr. Trump at his second impeachment trial, said he understood why, in the middle of a deadly pandemic, states sharply liberalized voting rules in 2020, extending mail-in voting, allowing mailed ballots to be counted days after Election Day and setting up ballot drop boxes, curbside polls and weeks of early voting.

But he added that Democrats should understand why state election officials wanted to course correct now that the coronavirus was ebbing.

“Every state needs to strike a balance between two competing values: making it as easy as possible to cast legitimate votes, but also the other, which is equally important: having everybody confident about the authenticity of the votes,” Mr. Toomey said.

Mr. Trump’s lies about a stolen election, he added, “were more likely to resonate because you had this system that went so far the other way.”

Some other Republicans embrace the notion that they are trying to use their prerogatives as a minority party to safeguard their own power. Senator Rand Paul of Kentucky said the endeavor was the essence of America’s system of representative democracy, distinguishing it from direct democracy, where the majority rules and is free to trample the rights of the minority unimpeded.

“The idea of democracy and majority rule really is what goes against our history and what the country stands for,” Mr. Paul said. “The Jim Crow laws came out of democracy. That’s what you get when a majority ignores the rights of others.”

Democrats and their allies push back hard on those arguments. Mr. King said the only reason voters lacked confidence in the voting system was that Republicans — especially Mr. Trump — told them for months that it was rigged, despite all evidence to the contrary, and now continued to insist that there were abuses in the process that must be fixed.

“That’s like pleading for mercy as an orphan after you killed both your parents,” he said.

Senator Tim Kaine, Democrat of Virginia, said in no way could some of the new state voting laws be seen as a necessary course correction. “Not being able to serve somebody water who’s waiting in line? I mean, come on,” he said. “There are elements that are in most of these proposals where you look at it and you say, ‘That violates the common-sense test.’”

Missteps by Democrats have fortified Republicans’ attempts to downplay the dangers. Some of them, including President Biden, have mischaracterized Georgia’s voting law, handing Republicans ammunition to say that Democrats were willfully distorting what was happening at the state level.

The state’s 98-page voting law, passed after the narrow victories for Mr. Biden and two Democratic candidates for Senate, would make absentee voting harder and create restrictions and complications for millions of voters, many of them people of color.

But Mr. Biden falsely claimed that the law — which he labeled “un-American” and “sick” — had slapped new restrictions on early voting to bar people from voting after 5 p.m. Senator Chuck Schumer of New York, the majority leader, said the Georgia law had ended early voting on Sunday. It didn’t.

And the sweep — critics say overreach — of the Democrats’ answer to Republican voter laws, the For the People Act, has undermined Democratic claims that the fate of the republic relies on its passage. Even some Democrats are uncomfortable with the act’s breadth, including an advancement of statehood for the District of Columbia with its assurance of two more senators, almost certainly Democratic; its public financing of elections; its nullification of most voter identification laws; and its mandatory prescriptions for early and mail-in voting.

“They want to put a thumb on the scale of future elections,” Senator John Cornyn, Republican of Texas, said on Wednesday. “They want to take power away from the voters and the states, and give themselves every partisan advantage that they can.”

Senator Mitt Romney, Republican of Utah, who could conceivably be a partner in Democratic efforts to expand voting rights, called the legislation a “fundamentally unserious” bill.

Republican leaders have sought to take the current argument from the lofty heights of history to the nitty-gritty of legislation. Senator Mitch McConnell of Kentucky, the minority leader, pointed to the success of bipartisan efforts such as passage of a bill to combat hate crimes against Asian Americans, approval of a broad China competition measure and current talks to forge compromises on infrastructure and criminal justice as proof that Democratic catastrophizing over the state of American governance was overblown.

But Democrats are not assuaged.

“Not to diminish the importance of the work we’ve done here, but democracy itself is what we’re talking about,” said Senator Brian Schatz of Hawaii. “And to point at other bills that don’t have to do with the fair administration of elections is just an attempt to distract while all these state legislatures move systematically toward disenfranchising voters who have historically leaned Democrat.”

Mr. King said he had had serious conversations with Republican colleagues about the precarious state of American democracy. Authoritarian leaders like Vladimir V. Putin, Viktor Orban and Adolf Hitler have come to power by election, and stayed in power by warping or obliterating democratic norms.

But, he acknowledged, he has yet to get serious engagement, largely because his colleagues fear the wrath of Mr. Trump and his supporters.