The Navy called a similar incident this week “flagrant” and “unwarranted.” 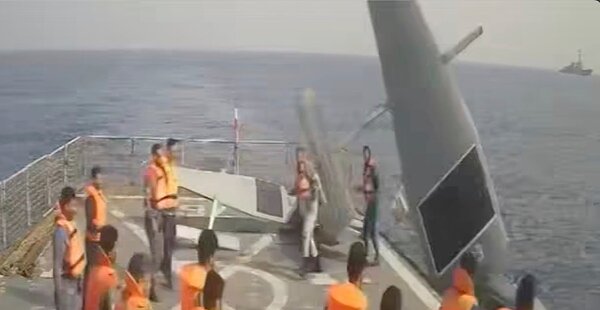 The crew of the Iranian naval ship that captured the drones, Saildrone Explorers that were operating near each other, hoisted the vessels onto their warship, the Jamaran, and covered them with tarp, one official said.

On request from the U.S. Navy, the Iranian crew released the drones Friday morning, the officials said.

It was the second such incident this week, following an Iranian attempt in the Persian Gulf overnight Monday to capture another one of the same type of American naval drone. The U.S. Navy said the action was “flagrant” and “unwarranted.”

In that case, the Navy said it spotted an Iranian Islamic Revolutionary Guard Corps naval support ship towing a Saildrone Explorer. The American seamen told the Iranians that the drone was U.S. government property and asked for it back.

With a U.S. Fifth Fleet MH-60S Sea Hawk helicopter hovering above, the Iranians disconnected the towing line they had attached to that drone and eventually departed the area, according to a U.S. Navy release at the time. The Navy resumed operations “without incident,” the release said.

The United States and Iran often tangle in the Persian Gulf — which the United States calls the Arabian Gulf — and in the Red Sea and the Arabian Sea. But the incidents this week come amid an international effort to revive a 2015 deal with Iran that limited its nuclear program. President Donald J. Trump abandoned the pact in 2018.

Since President Biden took office, American negotiators have been trying to revive the agreement, an effort that has become more pressing given Russia’s invasion of Ukraine, which has sent oil and natural gas prices soaring. Under the deal, the United States would lift tough economic sanctions on Iran that have limited its ability to export energy.

The United States and its partners in the region have also been working to set up a network of unmanned drones in a program to contain Iran.

The U.S. Navy has been operating Saildrone Explorers — which operate with cameras that can take 360 degree photos — since last fall. The drones are available commercially and do not carry classified information, American defense officials said.

One official said Thursday’s incident stood out because the seizure was conducted by the Iranian navy, which the Pentagon views as more professional than the Islamic Revolutionary Guards Corps navy. The U.S. officials spoke on the condition of anonymity because they were not authorized to discuss the incidents publicly.

Around 2 p.m. on Thursday, the crew on the Jamarran hoisted the American drones onto the ship, the official said. The drones usually operate near American naval assets, and two U.S. naval destroyers were monitoring the vessels. As it did on Monday, the Navy dispatched helicopters, which videotaped the Iranian crew’s actions.