He branded Ursula von der Leyen’s move to impose customs controls on the island of Ireland “unacceptable”. He asked for guarantees from the European Commission President that the EU never move to trigger Article 16 of the Brexit treaty that effectively would impose a hard border. Mr MacManus told the European Parliament: “It is unacceptable that the commission didn’t see the potential of destabilising the withdrawal treaty and Good Friday agreement by proposing the use of Article 16.

“Now we must ensure the fiasco isn’t repeated. Part of that is picking up the phone to Dublin and Belfast.”

Under pressure to apologise for her move that stoked tensions in Northern Ireland, Mrs von der Leyen expressed “deep regret”.

She told MEPs that the Commission would in future prioritise the peace process when making decisions relating to the Brexit agreement with Britain. 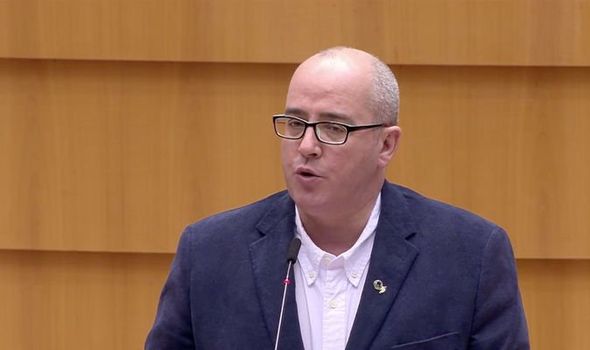 “The bottom line is that mistakes were made in the process leading up to the decision. And I deeply regret that,” she said.

“But in the end we got it right and I can reassure you that my Commission will do its utmost to protect the peace on Northern Ireland, just as it has done throughout the entire Brexit process.

The Commission scrapped plans for a full-blown export ban on vaccines made in Europe after it threatened a hard border on the island of Ireland.

Mrs von der Leyen had ordered plans to be drawn up to stop Covid jabs moving into the UK via its only land border with the bloc.

Her strategy was deployed amid growing anger over the bloc’s sluggish roll-out of Covid jabs.

But Mrs von der Leyen defended the scheme, claiming countries – such as Britain – that had rolled out vaccines faster had risked the health of their citizens by taking “shortcuts”.

She said: “We’ve made a choice to not make any shortcuts when it comes to safety or efficacy.

“We fully defend that choice. There is no compromise possible when it’s a matter of injecting a biologically active substance into an individual who is in good health.”

Mrs von der Leyen said it was the right decision to press ahead with a joint procurement programme for coronavirus vaccines.

If one of the “big players” – such as Germany – had got ahead of its neighbours it would have threatened the future of the EU, she added.

“I cannot even imagine what would have happened if just a handful of big players, big member states, had rushed to it and everybody else left empty handed,” Mrs von der Leyen said.

“What would that have meant for our internal market and for the unity of Europe in economic terms?