Historian Robert Tombs has hit out at the millions who want to stop Brexit and insisted they are “caught up in a self-induced existential crisis” for being pessimistic about Britain’s future outside of the shackles of the EU. Mr Tombs, 70, said: “The Remainer mindset is an irrational one based on cultural pessimism. The Leaver mindset is optimistic about our future as a successful, self-governing, and not least a happy country.”

The 70-year-old professor of French history at St John’s College, Cambridge, also criticised Remainers for constantly pointing out the flaws in Brexit rather than preaching the benefits of staying inside the bloc.

“Their idealised ‘Europe’ seems to be mainly attractive for being far away from Stoke, Walsall or Barnsley, but it is equally remote from Lens, Chemnitz, Bari or Piraeus.” 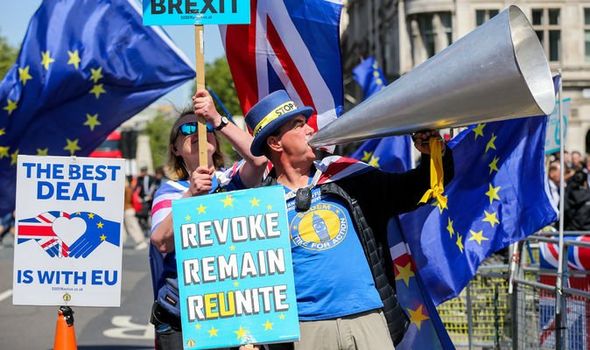 The historian also slammed Remainers for the lack of patriotism and respect for the 17.4 million people who voted to leave the EU in the 2016 referendum.

He added: “Remainers insist on their patriotism; but it is a strange kind of patriotism that loathes so many of its fellow citizens and regards its country with distaste.”

Following the hard-fought 2016 referendum campaign, Mr Tombs did sympathise with the concerns of Remainers such as the potential economic consequences, however now he believes those “alarmist predictions were false”.

The experienced academic said: “The main reason why people said they voted Remain in 2016 was fear of the economic consequences. I admit, I was worried myself until reassured by a Nobel laureate that no disaster loomed.

“But now we all can see that the alarmist predictions were false. We know too that preparations have been made to keep trade flowing, and that the Irish border is manageable.

“Yet diehards are still repeating slogans about ‘falling over a cliff’.”

One of the leading arguments for staying within the bloc is the peace it has brought to mainland Europe, and without the backing of the bloc, the UK could be bullied by the world superpowers, something university professor has refuted.

He said: “The EU is said to ‘keep the peace’, as if Germany would invade Poland again unless restrained by Mr Juncker.

“Worse still, Remainers think the US, China and Russia will kick us feeble Europeans around unless we form a federal state, however ineffectual and unpopular.”

Ahead of one of the most crucial European Elections tomorrow, Mr Tombs anticipates millions of people to flock to the Nigel Farage’s Brexit Party to vent their anger at politicians failure to deliver Brexit.

Mr Tombs added: “Millions seem set on voting resoundingly for Brexit at the European elections. They are angry with politicians but not intimidated by the future.”