Jeremy Corbyn will sit as an independent MP in the House of Commons going forward, following a fraught couple of days for the former Labour leader, in which party officials reinstated then deprived him of his membership. Mr Corbyn faced widespread backlash in the wake of a ruling from the European Human Rights Commission (EHRC) which found Labour had broken the law when it came to handling complaints on antisemitism in the Labour Party. His statement seemed to play down the commission’s findings and warranted swift action from Labour leadership.

Who decided to suspend the whip on Jeremy Corbyn?

The initial decision to suspend Jeremy Corbyn after the EHRC ruling came down to party leadership.

The first choice was not of the Parliamentary Labour Party, which Sir Keir Starmer leads, but the party’s executive.

David Evans, Labour General Secretary, chose to suspend him, while the committee reinstated him yesterday. 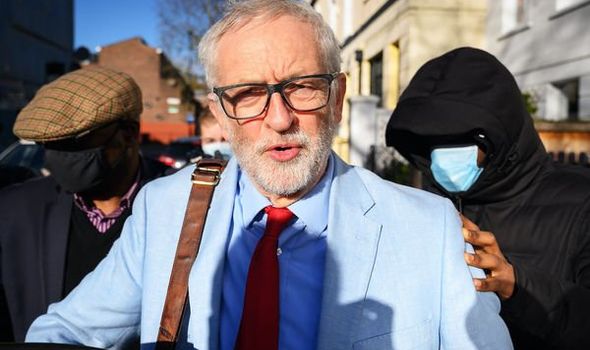 In a stunning reversal, Labour withdrew the whip from the ex-leader earlier today.

The second time differed, however, in that Mr Corbyn has had the whip withdrawn rather than a second suspension.

Withdrawing the whip is a decision which falls to the Parliamentary leader, meaning it was a direct order from Sir Keir Starmer.

He opened up on his decision via a lengthy Twitter statement, in which he revealed the approach taken by Labour’s committee had not gained the “confidence of the Jewish community”.

Sir Keir added he must “fix” the party he inherited but said he would keep the situation “under review”.

He said: “Since I was elected Labour leader, I have made it my mission to root out antisemitism from the Labour Party.

“I know that I will be judged on my actions, not my words.

“The disciplinary process does not have the confidence of the Jewish community. That became clear once again yesterday.”

“It is the task of my leadership to fix what I have inherited.

“That is what I am resolute in doing and I have asked for an independent process to be established as soon as possible.

“Jeremy Corbyn’s actions in response to the EHRC report undermined and set back our work in restoring trust and confidence in the Labour Party’s ability to tackle antisemitism.”

“In those circumstances, I have taken the decision not to restore the whip to Jeremy Corbyn. I will keep this situation under review.”

He now faces a revolt as 27 MPs signed a statement from the Socialist Campaign Group which condemned his decision as “wrong and damaging”.