The Rev. Jesse Jackson and Bishop William Barber II were both arrested Wednesday while protesting outside the U.S. Capitol against the filibuster and Republican opposition to a federal minimum wage increase.

“We come not as an insurrection group, but as a resurrection group,” Jackson shouted as the two men marched down Constitution Avenue with hundreds of demonstrators,” according to the Religion News Service. “Today we must fill up the jails. … If you call yourself a child of God, you oughta act like it sometimes.”

In all, nearly two dozen protesters were taken into custody during the Poor People’s Campaign rally, accused of crowding and blocking traffic, according to FOX 5 in Washington.

The bill required 60 votes to advance to debate but received only 50, with no Republicans voting yes on what McConnell called a “rotten” proposal. 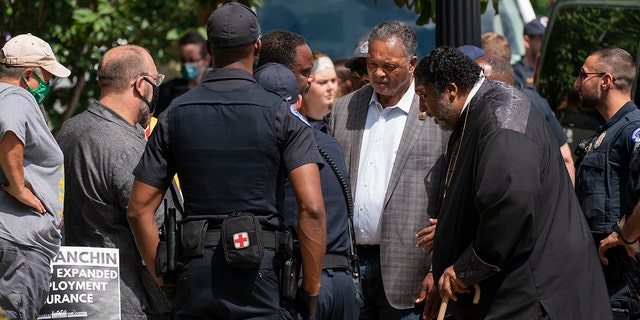 Barber spoke directly to Manchin during the protest and accused him of helping Republicans because of his support of the filibuster.

“We are also here to say to Manchin: Any so-called Democrat who claims to support the nonconstitutional filibuster over the constitutional guarantee that no state can deny or abridge the right to vote … you are assisting the Republicans in their extremism,” he said, according to the news service.

The march was dubbed “A National Call for Moral Revival” FOX 5 reported.