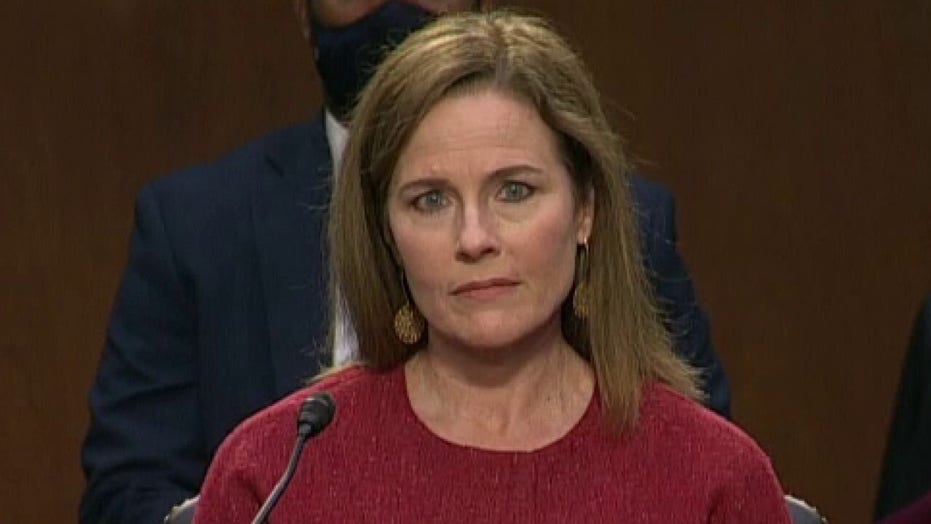 Amy Coney Barrett questioned on Second Amendment: ‘We do own a gun’

Amy Coney Barrett says she owns a gun but it won’t affect her judgment as a Supreme Court justice.

The U.S. Court of Appeals for the 3rd Circuit has issued an opinion over the right to bear arms that has received little attention, but it should.

It has been 12 years since the Supreme Court ruled that the right to bear arms under the Second Amendment is an individual right like freedom of speech or religion. However, the court left the scope of that right undefined at the edges, particularly when it came to limits on who can be excluded from gun ownership or whether certain guns can be excluded from ownership.

In her recent confirmation hearing, Justice Amy Coney Barrett was grilled over an earlier appellate opinion that, as an individual constitutional right, the right to bear arms could not be taken away with blanket bans against nonviolent former felons.

The 3rd Circuit decision in Folajtar v. The Attorney General of the United States may be one of the most perfectly tailored cases for a major Supreme Court decision. Indeed, the only thing lacking from the 2-1 ruling is a mailing label directly to Justice Barrett. In ruling that a nonviolent tax conviction can result in the denial of gun ownership, the panel presents a clean case to further define the contours of the individual rights recognized in District of Columbia v. Heller (2008).

The 3rd Circuit case concerns Lisa Folajtar who was denied the right to own a firearm. The reason was her pleading guilty in 2011 to willfully making a materially false statement on her tax returns. The plea led to a sentence of three years probation, including three months of home confinement, a $10,000 fine, and a $100 assessment. She also paid the IRS over $250,000 in back taxes, penalties and interest.

The case falls into the still grey area around the individual right articulated in 2008. The Supreme Court recognized that this is not an “unlimited” right under the Constitution while affirming the right of “law-abiding, responsible citizens to use arms in defense of hearth and home.” Moreover, the court ruled two years later that Heller “did not cast doubt on such longstanding regulatory measures as ‘prohibitions on the possession of firearms by felons.’”

The question is whether this means any and all felons, even those never accused of violent acts.

That changed in the 1960s when Congress expanded the bar on gun ownership. That however was long before the Heller decision recognized gun ownership as an individual constitutional right.

The majority viewed this determination as appropriately within the discretion of Congress and notes that other core rights can be lost by a felony conviction:

“Indeed, we defer to the legislature’s determination that individuals convicted of felonies may forfeit other fundamental rights, such as the right to vote and to sit on a jury, the former being the essence of our democracy… As felons are rarely protected by the Second Amendment, Congress is also normally entitled to require disarmament as a result of a felony conviction without engaging in an evaluation of each felon’s rehabilitation and likelihood to engage in further criminal activity of any kind.”

Bibas, however, rejected the “near categorial” rule as a misapplication of prior rulings like Heller. He also faulted the sweeping analysis that brushed over the fact that this is a nonviolent offense and that there is no evidence of dangerousness:

If Barrett and Kavanaugh can get two other justices to accept certiorari, this could be a decision that approaches Heller itself in constitutional importance.

“The majority’s extreme deference gives legislatures unreviewable power to manipulate the Second Amendment by choosing a label. ‘Unvirtuousness’ based on the felony label is a mushy standard that sets no limit. We must not reflexively defer to that label when a fundamental right is at stake, but rather require narrow tailoring to public safety. Felons are more than the wrongs they have done. They are people and citizens who are part of ‘We the People of the United States.’ … So, they too share in the Second Amendment ‘right of the people to keep and bear Arms,’ subject only to the historical limits on that right. Although Lisa Folajtar was convicted of tax fraud nine years ago, she is not dangerous. Neither the majority nor the government suggests otherwise. Because she poses no danger to anyone, I respectfully dissent.”

It is hard to ignore the analogy to one of now Barrett’s prior decisions as an appellate judge in Kanter v. Barr. Rickey Kanter was convicted of one count of felony mail fraud for defrauding Medicare in connection with therapeutic shoe inserts. The Seventh Circuit panel split 2-1 with Barrett in dissent. Focusing on the “history and tradition” of such restrictions, Barrett also took on the voting rights and jury service point with a key distinction:

“The problem with this argument is that virtue exclusions are associated with civic rights – individual rights that ‘require[ ] citizens to act in a collective manner for distinctly public purposes.’… For example, the right to vote is held by individuals, but they do not exercise it solely for their own sake; rather, they cast votes as part of the collective enterprise of self-governance. Similarly, individuals do not serve on juries for their own sake, but as part of the collective enterprise of administering justice…

That is why the 3rd Circuit case could be so important. It is Kanter revisited but Barrett is now a justice, not just a judge. Her view is also shared by new colleagues like Justice Brett Kavanaugh in his own dissent as a judge on the D.C. Circuit when a panel upheld the ban on semi-automatic rifles and the possession of magazines with more than 10 rounds of ammunition (as well as certain registration requirements).

If Barrett and Kavanaugh can get two other justices to accept certiorari, this could be a decision that approaches Heller itself in constitutional importance.

Assuming that you accept that this is an individual right, I have serious reservations with the sweeping analysis of the 3rd Circuit. The panel imposed little burden on Congress to extinguish an individual right other than its own categorical declaration. While no right is absolute, most of us would be outraged if such a low burden was imposed on other individual rights under the Constitution.

There is a good-faith debate over whether this is an individual right, but the question raised by this case is whether, as an individual right, it can so easily be set aside – particularly under a law that preceded the Heller decision. Two justices are likely clearing their desks in anticipation of the arrival of this case from the 3rd Circuit.