As the FBI’s probe into the sexual-assault allegations against Judge Brett Kavanaugh seems to be drawing to an end, a group of teens shared their opinions on last week’s hearing and President Trump’s recent comments about “young men” in present-day America with “Nightline.”

The aftermath of the hearing with Kavanaugh and one of his accusers, Christine Blasey Ford, has pushed the issues surrounding sexual assault allegations, sexual assault reporting and consent back into the national conversation.

“Nightline” spoke with a group of high schoolers in New York City to ask their opinions on these recent events and their view of today’s political climate. They asked for their last names not to be used. 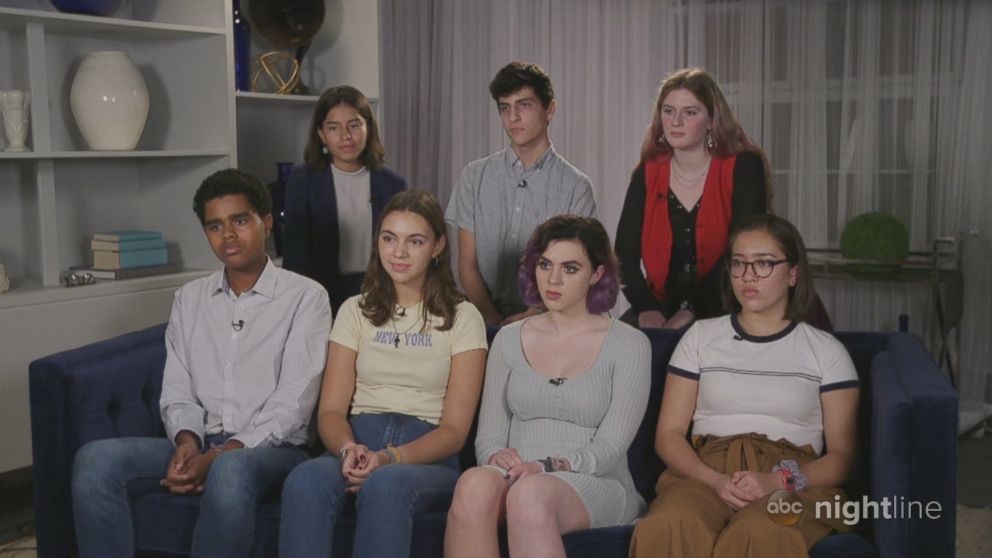 President Trump made comments this week about his concern for “young men” being falsely accused of sexual assault in the future, which set off a firestorm of reaction.

“I say that it’s a very scary time for young men in America when you can be guilty of something that you may not be guilty of,” Trump said Tuesday. “This is a very difficult time. What’s happening here has much more to do than even the appointment of a Supreme Court Justice.” 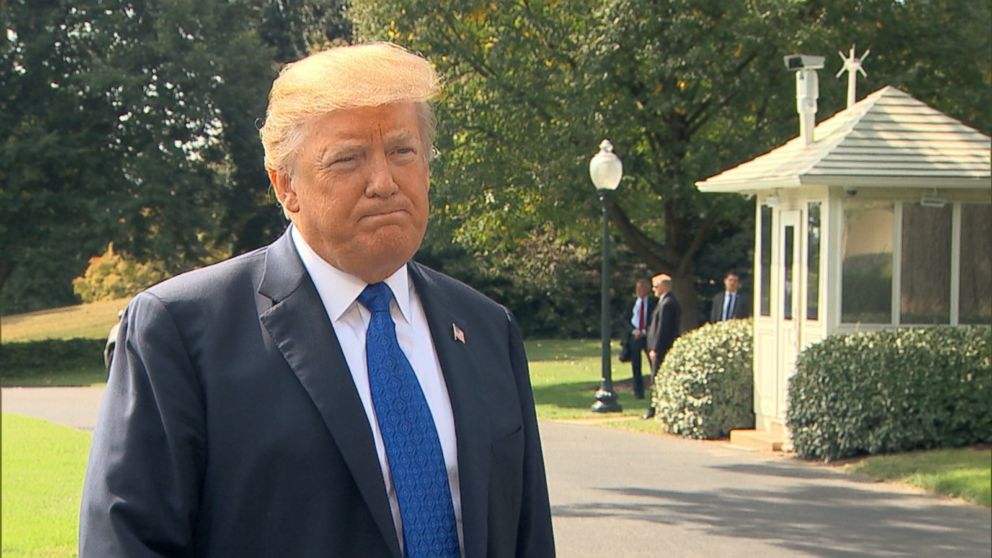 The president’s comments were in response to questions about an interview the Daily Mail released Monday with his son Donald Trump, Jr., who similarly said that he fears more for his sons than his daughters and the chance they’ll be victims of false accusations of sexual misconduct.

“For [President Trump] to reference that young men are in trouble … it’s false,” said a 17-year-old student named Jared. “There are a lot of young men in this country who are looking to him and looking to other male politicians and as a way to think how they should progress in their lives, and he’s sending them back. He’s not pushing them forward. He’s not helping the next generation, He’s stopping them. He’s halting them.”

“Interestingly, a lot of [the concerns are] coming from conservative women who are saying this is dangerous — this could be your son, your husband or your brother who are brought down by allegations that don’t have a lot of evidence behind them,” Marcus said.

Trump’s comments were the latest in the bare-knuckle politics over the president’s nomination to the Supreme Court.

Last week, Ford testified in front of the Senate Judiciary Committee that Kavanaugh was drunk and sexually assaulted her at a party when they were both in high school. Kavanaugh gave his testimony afterward and adamantly denied the allegations.

“I’ve never sexually assaulted anyone,” Kavanaugh, who became angry during portions of the testimony, told the committee. “Not in high school, not in college, not ever.” 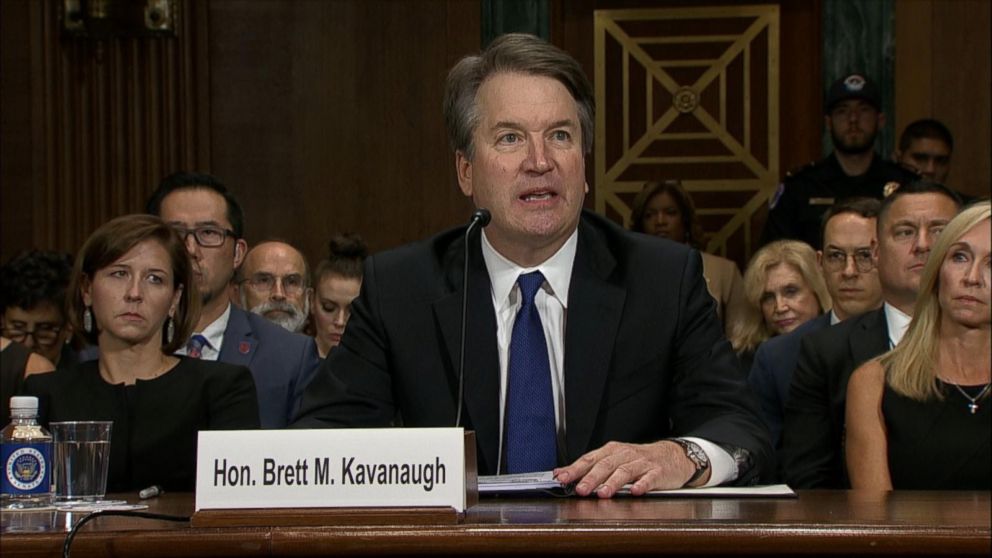 The teens told “Nightline” they were glued to the hearings, even during the school day. They said their classmates were watching the hearings on their phones during lunch.

The teens said they were decidedly behind Ford, even before hearing her or Kavanaugh’s testimony.

“I did try to go into [it] with an open mind and see if maybe Kavanaugh showed some perspective to the situation or if he seemed credible,” said a 15-year-old student named Janelle. “But then watching it, the way he acted and she acted … they acted so different, that it really shed a light to the situation.” 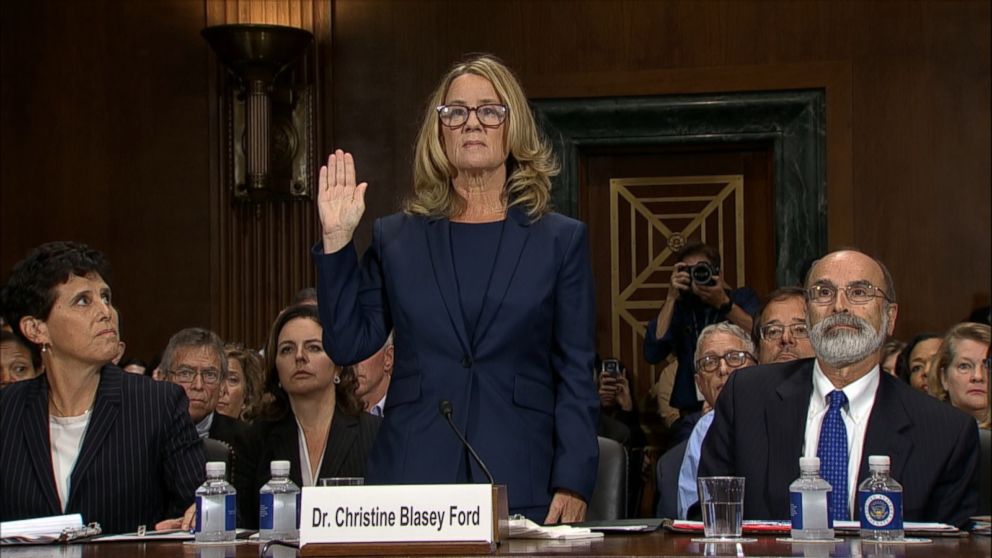 In watching Kavanaugh’s demeanor during his testimony, Janelle said she thought it was “disgraceful.”

“A lot of kids my age were looking at this and watching it and I just think that the way he composed himself really didn’t set a good example for these kids,” she said.

Zoe, an 18-year-old student, said, “I thought it was super disrespectful when he shot back questions to the people asking him the questions when it was sort of his interview, his job interview, and particularly towards the woman.”

She was referring to Sen. Amy Klobuchar, D-Minnesota, who asked Kavanaugh if he ever had so much to drink that he didn’t remember the night before. Kavanaugh responded with a pointed question: “You’re asking about blackout. I don’t know, have you?”

“Could you answer the question, judge? That’s not happened? Is that your answer?” Klobuchar responded.

“Yeah, and I’m curious if you have,” Kavanaugh said.

Klobuchar: “I have no drinking problem, judge.”

Catrina, 17, told “Nightline” she was put off by that exchange.

“How could anyone think that was an appropriate question to ask?” she said.

Marcus, “The Federalist” reporter, said he thought Kavanaugh was “clearly angry” about the accusations.

“He had to think to himself, ‘My goodness, we’re talking about my yearbook in front of the U.S. Senate … I thought he had every right to defend himself as vociferously as he felt he needed to,” he said.

One 18-year-old student named Guy said, “If someone accused me of something I didn’t do, I would be upset.”

But for some of the teens, it was Kavanaugh’s tone that turned them off.

“I think you have to have trust in the system and the system that he’s going to work for. He seemed like he didn’t trust them at all. And so I think that’s reflective of his character,” said one student named Kaitlyn.

If Ford had acted the way Kavanaugh did during her testimony, Zoe said, “I think they would’ve gone even further as to label her as some hysterical woman.”

Listening to Ford describe how she remembered the “uproarious laughter” from Kavanaugh and Mark Judge, who Ford said was allegedly in the room, too, was upsetting for some of the teens.

“When she said that, I was like, ‘OK, you are a human being who went through this,’” Guy said.

“I’m also 15,” Janelle said of Ford’s age when the assault allegedly happened. “One of the biggest fears for a 15-year-old is being publicly ridiculed or ridiculed by your peers … and that she was in this situation, which was already horrific, and then something like these boys laughing at her, like, I felt deeply with that.”

“Her feelings during that situation … it made my heart drop a little more,” said another 15-year-old student named Mabel.

After the hearings last week, Trump initially called Ford a “very credible witness.” But then the president pivoted and seemed to mock her testimony at a rally Tuesday night in Mississippi amid chants of: “We want Kavanaugh.” 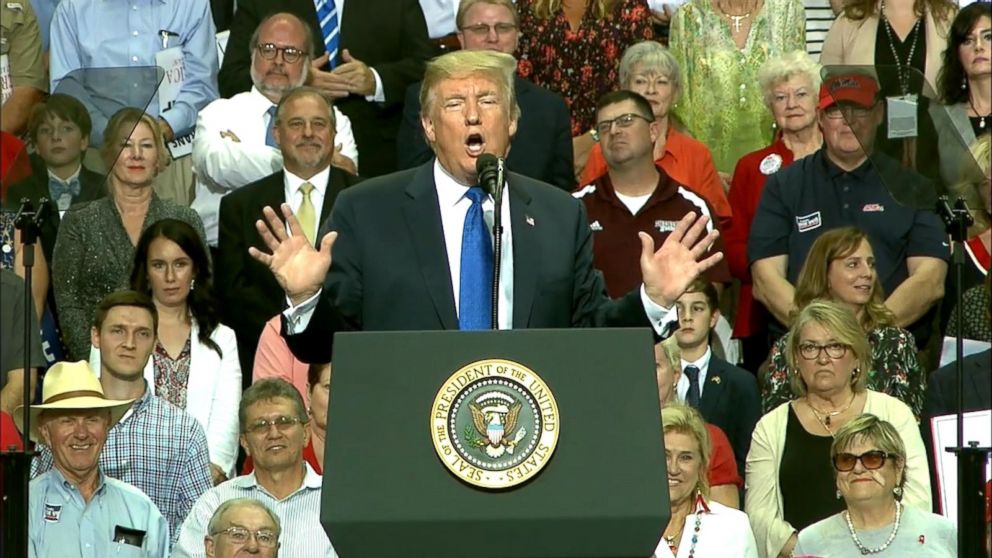 The president’s comments at the rally were “clearly” used for “political motivation,” Marcus said.

“I think we’re seeing the president, again, as he always does, try to play offense,” he said.

“And we’ll have to see in November,” he continued, referring to the midterm elections, “if you know he’s playing the right cards.”

One of Ford’s attorneys blasted Trump afterward, writing in a post on Twitter that it was, “A vicious, vile and soulless attack on Dr. Christine Blasey Ford. Is it any wonder that she was terrified to come forward, and that other sexual assault survivors are as well? She is a remarkable profile in courage. He is a profile in cowardice.”

Murkowski called his comments “wholly inappropriate” and “unacceptable.” Flake told the “Today Show” that he found the comments “kind of appalling.”

“The president was stating the facts,” White House press secretary Sarah Sanders told reporters. “He was stating facts that were given during Dr. Ford’s testimony.”

But Zoe, one of the teens, saw it differently.

“It’s victimizing the people who were the oppressors, same as in the Kavanaugh case where people are saying, ‘Oh, poor Kavanaugh. Poor Kavanaugh,’” she said.

“I think it was so incredibly brave of her [Ford] to come forward at all,” she added.

According to the Rape, Abuse and Incest National Network, or RAINN, the U.S.’s largest anti-sexual violence organization, most studies show the reporting of rape is low — only 2 to 8 percent of rapes are reported. Furthermore, rape is underreported to law enforcement: two out of three rapes are never reported to police, according to the group.

“The people that come out and say, ‘Oh, I was assaulted,’ … they become a target of the public eye, and everyone is looking at them and that’s terrifying,” Guy said.

“My school is maybe 600 students,” he continued. “And I’m scared to walk in with a stain on my T-shirt. And these people, they are coming out and saying, ‘I was attacked.’”

When asked if the teens thought it was fair to hold Kavanaugh accountable now for something he may or may not have done when he was their age many years ago, some said he should, if it happened.

“If by letting him get away with this, it’s basically reinforcing the saying, ‘Boys will be boys,’” Catrina said.

And they believe their opinions should be taken seriously.

“Yeah, we’re teenagers, but many of us will be voting either this year or next year,” Guy said. “It’s our future. It’s not like … we suddenly pop into political existence when we turn 18. We’ve been here, and this is affecting us.”