Rishi Sunak grilled on being Chancellor 'with highest tax burden'

The poll puts the Opposition on the same level as they secured at the last general election when Jeremy Corbyn was leader. In a further blow for Labour, Sir Keir Starmer’s personal popularity has also taken a hit over the past week with 15 percent more people believing Mr Johnson would make a better Prime Minister.

If a general election was held tomorrow, 45 percent of people polled would vote for the Conservatives, uptimes four percent on a similar survey a week ago.

Labour would pick up 32 percent of the vote according to the poll, the same amount as in the December 2019 election.

The result at the polls was the party’s worst since 1935, with Labour winning just 203 seats. 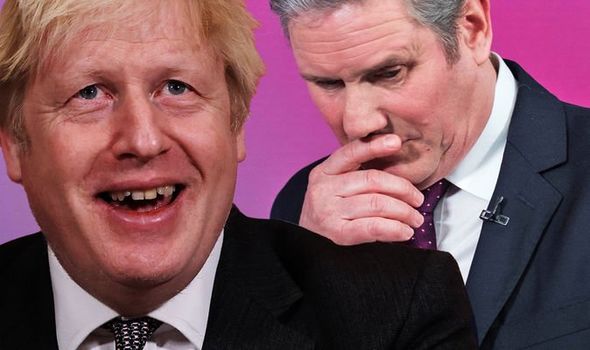 The mega-boost for the Conservatives comes ahead of crunch votes in May which will see Brits go to the ballot box for a series of local council and mayoral elections, as well as the Scottish and Welsh parliament elections.

The fresh polling boost for the Tories comes despite Chancellor Rishi Sunak announcing a Budget yesterday in which he pledged to hike up taxes over the next four years.