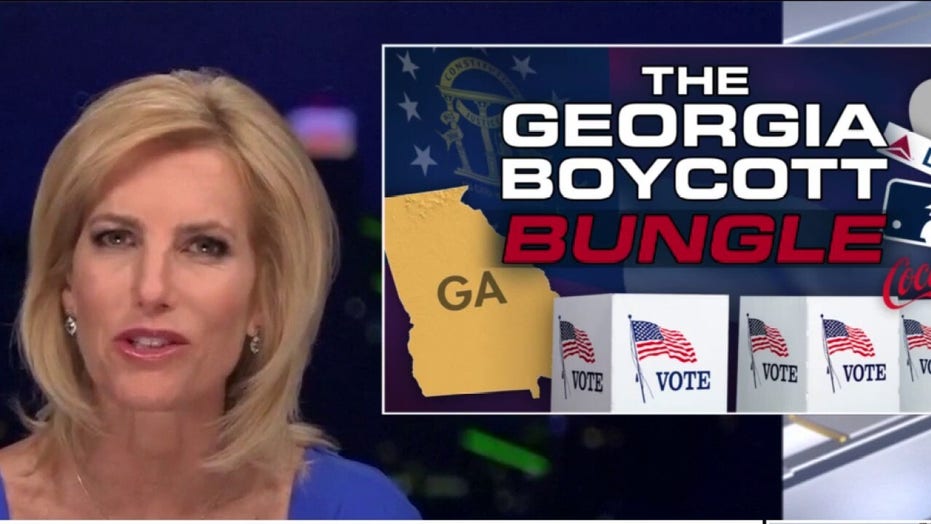 Ingraham: Stacey Abrams stuck in her own ‘trap’ with Georgia boycotts

Whoops! Well, it turns out that bowing down to the social justice warriors really is a dangerous and self-defeating strategy.

Case in point: Democrats’ lies about Georgia’s voter integrity law, equating it to Jim Crow. Well, it sends an all sorts of far-left activists down the boycott Georgia warpath, including, well, that fringe figure, President Joe Biden, who eagerly jumped on the punish Georgia train in an interview with ESPN.

SAGE STEELE, ANCHOR, ESPN: So, Mr. President, what do you think about the possibility that baseball decides to move their All-Star Game out of Atlanta because of this political issue?

PRESIDENT JOE BIDEN: I think today’s professional athletes are acting incredibly responsibly. I would strongly support them doing that.

Well, well, well. Aside from the fact that Joe seemed to be sleeping in that interview, as “The Angle” told you last night, these left-wing boycotts of the All-Star Game or frankly, any other event or product, would cause huge economic damage and send jobs to other low-tax states. They’ll hurt Georgia.

So, the blowback against this is growing, which forced even liberal Georgia Sen. Jon Ossoff to put out a statement last night saying, “I absolutely oppose and reject any notion of boycotting Georgia.” But then he said that look, corporations that are disgusted, like we are with this voter suppression bill, should stop any financial support for the Georgia Republican Party.

And then Stacey Abrams, the mastermind behind the fraudulent attack on Georgia’s voter ID law, also has been caught in a trap of her own making.

STACEY ABRAMS, FOUNDER, FAIR FIGHT: To our friends across the country, please do not boycott us. I understand the passion of those calling for boycotts of Georgia following the passage of SB 202, but here’s the thing. Black, Latino, AAPI, and Native American voters whose votes are most suppressed under SB 202 are also the most likely to be hurt by potential boycotts of Georgia.

Now, none of this makes any sense. OK. Here’s a question for Ms. Abrams: If Georgia really is trying to resurrect the evils of Jim Crow and segregation, then how could businesses remain there in good conscience? Shouldn’t everyone, even the low-income voters, citizens, have to sacrifice to force Georgia businesses to get in line here and force the state legislature to do what they should do?

Well, what happens is Abrams sees where all this is leading. It would destroy Georgia’s businesses and actually could destroy her own political future. Thus, it was no surprise to see the White House on a cleanup mission after Biden’s boycott blunder. Maybe they got a call from Stacey Abrams as well.

But we all know what this is really about. This is about bullying corporations into supporting Nancy Pelosi’s massive election rigging scheme called H.R.1. The measures would override all state voting prerogatives and ensure a permanent Democrat majority from coast to coast. This would actually invalidate the votes of tens of millions of Americans through nationalized ballot harvesting, the elimination of voter ID requirements, and a lot more.

But the good news is, Texas is now following in George’s footsteps. Yesterday, the state Senate passed voter integrity measures of its own. Well, and what happened then? Well, predictively, Dallas-based American Airlines and Dell Computer, they’ve already announced their opposition to the commonsense bill. That’s a really dumb move on their part.

And going forward, I’m going to say this – I’m trying to say this every night going forward, every Republican lawmaker, not just in Georgia or Texas, but beyond, should put these companies on notice. A lot of them, by the way, do plenty of business in China, as we pointed out. They have no problem with that.

But you side with the vote-riggers who are lying about these reforms, and you will lose every tax break, every incentive every credit going forward. And if these big corporations think they’re going to get better results with Democrats in charge of all 50 states, good luck with that.