Rep. August Pfluger, R-Texas, weighs in on the border crisis and tax hikes under the Biden administration.

Some lawmakers aired the possibility of a smaller corporate tax hike to pay for President Biden's $2.25 trillion spending plan during an Oval Office meeting as the bipartisan group weighed changes to the size and scope of the next big economic measure.

The White House has proposed raising the corporate tax rate to 28% from 21%, along with imposing a higher global minimum on businesses' foreign earnings, to finance the president's infrastructure plan. But on Monday afternoon, Biden and several lawmakers discussed a more modest corporate tax increase.

Rep. Charlie Crist, D-Fla., told The Wall Street Journal that lawmakers discussed the potential for some "compromise wiggle room" on raising corporate taxes. He suggested the increase may end up being around 2% or 3% — putting the new rate around 25%.

The meeting is the latest that Biden has held with lawmakers across the political aisle over the economic proposal, dubbed the American Jobs Plan. The measure calls for billions of dollars in new funding for roads and bridges, as well as transit systems, water infrastructure, broadband access, hospitals and elder care. 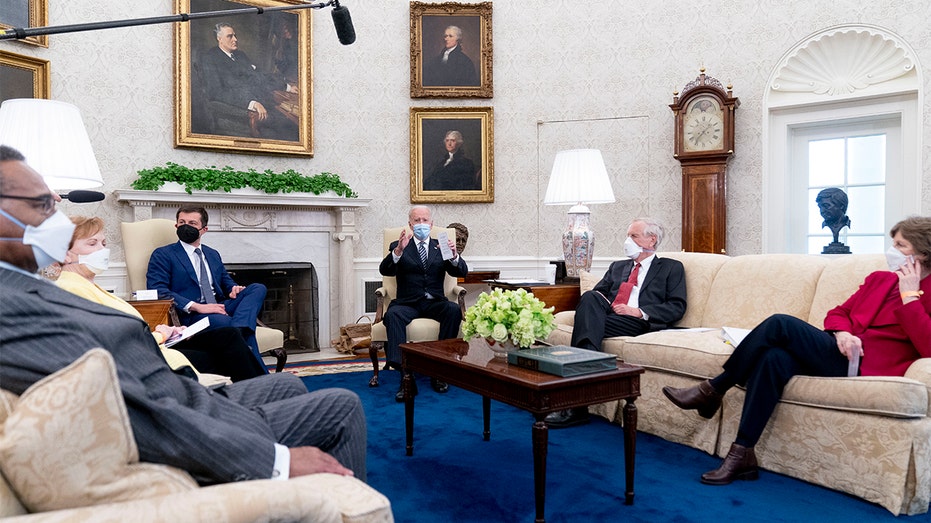 "As I indicated earlier, I am prepared to compromise, prepared to see what we can do and what we can get together on," Biden said in the Oval Office at the meeting's onset. "It's a big package, but there are a lot of needs."

But some Senate Republicans have criticized the plan as too wide-ranging in what it deems to be infrastructure and are drafting a counteroffer that's expected to cost somewhere around $650 billion. It's unclear how such a measure would be paid for, although Romney suggested last week that it may involve user fees.

Giménez said Monday that lawmakers were "more in favor of user fees so that whoever was benefiting from that particular infrastructure project would be paying for it in the long run. GOP lawmakers are expected to release their plan during May recess.

With narrow majorities in the House and Senate, Democrats have the option to circumvent Republicans and pass the measure on a party-line voting using a procedural tool known as budget reconciliation. But some moderate members, including Sen. Joe Manchin, D-W.Va., have indicated they want to pursue a bipartisan deal first.

"I think they would like to work on a bipartisan basis," Romney told the Journal. "The challenge is going to be how it’s paid for, and we’ll see if we can cross that bridge."

Asked whether the White House is supportive of slashing the proposal to about $800 billion, press secretary Jen Psaki said the president is weighing a number of different options.

"We're quite open to a range of mechanisms for agreed-upon legislation moving forward, smaller packages, pieces being peeled off," Psaki said on Monday. "In terms of what the package or size looks like, we’re just not quite there yet."