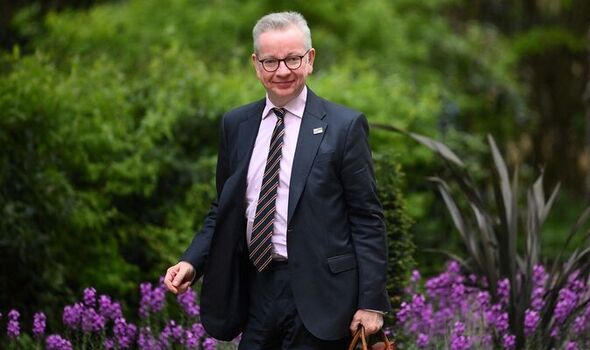 The Levelling Up Secretary remains determined to deliver on the hopes of people who voted Conservative in 2019 that their communities will be transformed. He is adamant that the cost of living crisis and the fall-out from Russia’s invasion of Ukraine do not mean these ambitions must be let jettisoned.

“No, no,” he says, sitting beneath a photographic portrait of the Queen in his Whitehall office. “Levelling up is even more important now than it was in 2019.”

The 54-year-old speaks with passion of his plans to force landlords to rent out derelict properties and his determination that yobs responsible for antisocial behaviour will be seen cleaning up graffiti in florescent jackets.

He is convinced that tackling empty buildings will help revive communities.

“A friend said to me that if you have got empty properties in a high street it’s like missing teeth in the smile of a dear friend,” he said. “It is something we absolutely need to address.”

Under the plans, councils will be able to compel landlords to rent out the properties to the highest bidder.

He said: “If they won’t play ball then we’ll give the local council the power to say, ‘Right. You’ll get rent but that property is going to be occupied by the hairdresser, the beautician, the baker, the new tech start-up or whatever it might be that needs premises and wants to be there helping customers and providing jobs.’”

Mr Gove’s ambitions as a minister are shaped by his background.

He has described how he was “born to a single mother in an Edinburgh hospital ward in 1967 and then taken into care”. Four months later, adopted by Ernest and Christine Gove.

He is a fervent supporter of adoption and believes this saves lives.

“The story of Arthur Labinjo-Hughes reminds us that there is still so much to be done,” he said. “If Baby Peter, if Arthur, had been adopted and [were] with a loving family then they would be alive today.

“Changing the fate of children who either are at risk or who find themselves in institutional care – the sooner we can get those children with people who love them the better.”

He is keenly aware of the difficulties suffered by poorer children during lockdown.

“You can’t replace the experience of being in the classroom with teaching over Zoom,” he said. “One of the things that we saw was that children from poorer backgrounds fell behind.

“We [were closing] the gap between rich and poor children in state schools, [then] it widened over Covid. So that means that we need to get back to a real drive for achievement.”

However, any suggestion that students from less privileged backgrounds should be excused exams triggers exasperation.

“One of the things I worry about is there a growing call from some fashionable quarters to get rid of GCSEs [because] these exams cause too much stress for children. I think that is completely wrong…

“I think that what we need to do is to make sure that we have rigour in the classroom and high expectations for all children. I’ve heard this song again about getting rid of exams – what it is really all about is having low expectations for children, assuming that they can’t do well.”

Though known as one of the most courteous MPs in Westminster, he also relishes a battle and delights in taking on what he sees as vested interests.

“When it comes to home ownership, we are also going to take on the developers who control the housing market and we are going to make sure that we open home ownership up to many more people,” he said.

Mr Gove, who represents Surrey Heath, argues that Conservatives in the south of England support efforts to raise the quality of life in more deprived regions.

He said: [My] constituents are One Nation Conservatives… I think most people in this country are altruistic and patriotic and so they want the whole country to succeed and they want people who may not have had a fair shake of the sauce bottle in the past to succeed as well.”

Aberdeen-raised Mr Gove is one of Parliament’s highest profile champions of the United Kingdom as union of nations.

“Crises like the crisis in Ukraine force us to recognise the importance of things like defence and security and working together,” he said. “Crises like the Covid pandemic made us realise we could only get the vaccines necessary and get them distributed if we all worked together.

“[Scottish First Minister] Nicola Sturgeon is a formidable politician but I think that she must recognise that the case for independence has been made weaker, not stronger, by the events of the last three years and I certainly think that’s what people in Scotland feel as well.”

He is no less enthusiastic about the continuation of the monarchy.

“It is undoubtedly the case that there are people both within Labour and the SNP who dislike our past and our institutions and who want to undermine them,” he said. “I think there is a profound danger there because our monarchy, our royal family, are a focus of national unity and they set an example of service that every other nation in the world admires.”

Arguing that the Queen “embodies the idea of thinking about others first,” he said: “If you hack at that tree then you are attacking the essence of so many of the virtues that are special to the United Kingdom.”

He describes the Conservatives as a party that is “on your side” and draws a sharp distinction with Sir Keir Starmer’s Labour, saying: “The problem with Labour – I’ve nothing against any individual – is that they are in hoc to special interest groups, they are in hoc to the trade unions, they are in hoc to hard Left identity politics people, and they are not really on the side of working people. They care more about what university lecturers and Guardian journalists think than they do about people who are working hard to earn a living.”

Mr Gove burns with a clear desire to make his mark on the country and speaks with excitement of his hopes to open up the housing market – he is exploring the potential for giving housing association tenants the right to buy their properties – but this former journalist would also like to see a more forgiving society.

He said: “When I was at the Ministry of Justice one of the things that I said then which I think is true is nobody should ever be defined by their worst moment and everyone has the capacity to learn and to contribute…

“Particularly in politics, you can become worn down and cynical. You mustn’t allow that to happen.”

He added: “It’s important wherever possible that we try to put ourselves in someone else’s shoes and also forgive. And I certainly know there’s a lot I’ve got to be forgiven for.”