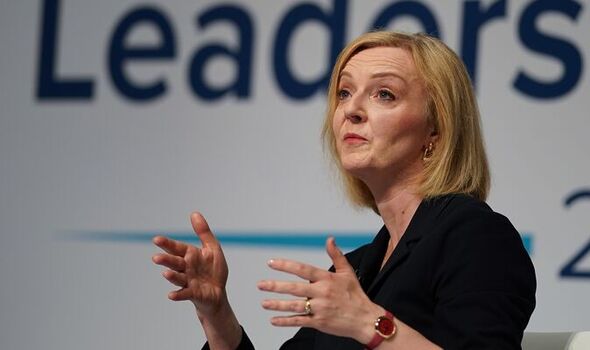 The Foreign Secretary revealed she has had to battle with civil service mandarins over policy relating to Israel. She also set out plans to tackle anti-Jewish attacks by improving education in schools and ridding university campuses of prejudice. And finalising a free trade agreement between the UK and Israel will be a priority if she wins the Tory leadership race.

She said: “The relationship between the UK and Israel has grown over the last year but there is still more to do, including completing a free trade deal with Israel.

“So many Jewish values are Conservative values and British values too, for example seeing the importance of family and always taking steps to protect the family unit – and the value of hard work and self-starting and setting up your own business.”

During her time at the Foreign Office, Ms Truss said she has taken a “strong stand” in tackling anti-Semitism internationally, particularly on organisations such as the United Nation’s Human Rights Council. She says it has been “used to peddle a particular agenda which frankly have strong elements of anti-Semitism”.

The approach meant she had to “overrule” Foreign Office officials who claimed it would leave Britain “isolated”. Ms Truss said: “Every organisation has its culture, but it’s not fixed, it can be changed. That’s what ministerial leadership is about – it’s about making sure that the policies we represent, the values we stand for, are reflected in what we do.

“I’ve been very clear with our officials about the positions we take on Israel, and that will continue if I become Prime Minister.”

The comment caused a backlash inWhitehall. Dave Penman, general secretary of the FDA, which represents senior civil servants, said: “Truss’s accusation of anti-Semitism goes further than the usual dog-whistle politics that has been on display during this leadership campaign when it comes to the civil service.

“She provides no evidence for her accusation that many civil servants will find both insulting and abhorrent.

“A prime minister is also minister for the civil service, and throwing around such unfounded inflammatory accusations illustrates a lack of leadership – the very thing that she claims to be demonstrating.”

Mike Clancy, general secretary of the Prospect union, which repre- sents civil servants, said: “Anti- Semitism and racism in any form is deplorable and must be eradicated. She should have a better grip on both the evidence and facts about what is happening in the civil service.

“If there is evidence, she should publish it.

“This smacks more of further attempts to undermine public services rather than focus on the job of serving the public.”

The issue of anti-Semitism in politics came under sharp focus during Jeremy Corbyn’s leadership of Labour. He was suspended from the party in 2020 for rejecting a bombshell report into his handling of the issue while in charge. Sir Keir Starmer said it was a “day of shame” for the party and vowed to stamp out anti-Jewish prejudice in its ranks. The Equality and Human Rights Commission found the party was responsible for unlawful acts of harassment and discrimination during Mr Corbyn’s time at the top.

It said there were “inexcusable” failures in the response to the issue that “appeared to be a result of a lack of willingness to tackle anti-Semitism rather than an inability to do so”.

A Ms Truss source said: “As Prime Minister Liz will review whether schools are doing enough to tackle increasing anti-Semitism.”

A spokesman for the Community Security Trust, a charity working to protect British Jews, said: “Both leadership candidates have expressed strong opposition to anti-Semitism.

“We sincerely welcome their suggested policies for how to best tackle this growing problem.”

Meanwhile, Boris Johnson showed little sign yesterday that he would soon forgive Rishi Sunak for helping to oust him from No 10.

The Prime Minister dodged questions about whether he would start returning the former chancellor’s calls after refusing to speak to him since his Cabinet walkout.

It came after Mr Sunak said he had tried to contact Mr Johnson but “not surprisingly” his calls had gone unanswered and had not been returned.

During a visit to NorthWales, Mr Johnson told reporters asking about the situation: “That’s one of those Westminster questions that doesn’t change the price of fish.

“There are plenty of things that do change the price of fish, not least the price of energy, but that’s not one of them.”

Mr Sunak insisted he was still in with a chance of winning the leadership contest as he continued to meet party members yesterday.

He told Times Radio: “I’m fighting passionately for the things that I believe are best for this country.

“And the reception I’m getting everywhere I go is positive and I think I’ve got a fantastic chance to make progress in this campaign.”

He denied it was a lost cause, adding: “All the polls don’t say that actually, there was a poll of councillors the other day – and there have hardly been any polls to be honest – which showed it was completely evenly split between me and Liz Truss and people who don’t know, and that’s the point.” Mr Sunak said “lots of people have not made up their mind”.