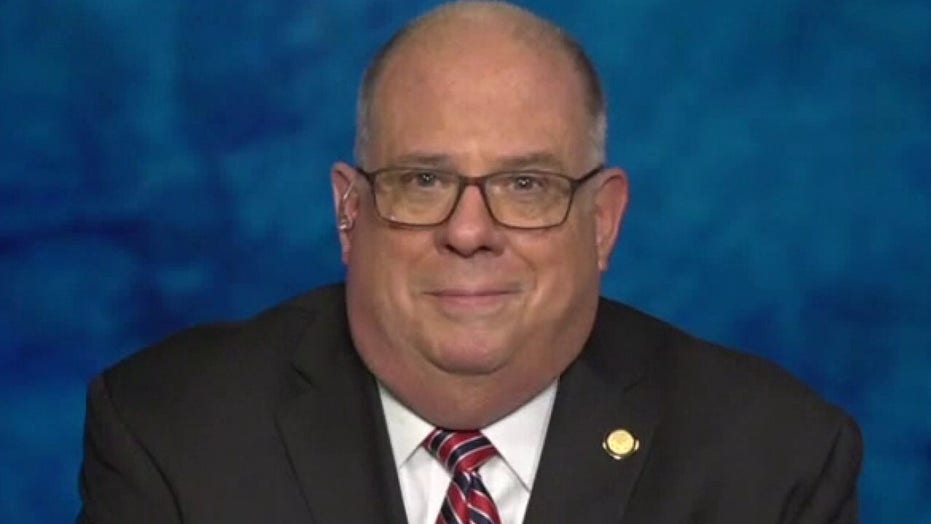 Maryland Gov. Larry Hogan weighs in on the Democratic and Republican Parties ahead of the 2020 election on ‘The Daily Briefing.’

“People really want someone who’s pragmatic, who’s not afraid to compromise,” Hogan told The Washington Post, decrying the “extremes” of Democrats and Republicans in Washington.

From the coronavirus pandemic to the Supreme Court, Hogan has frequently sparred with President Trump, and as he continues to expand his political network nationwide, some say the Maryland Republican could be mounting a possible 2024 presidential bid.

He is hosting fundraisers for candidates in states across the nation who cast themselves as sensible Republicans. Last month, he filmed ads for Sen. Susan Collins, a centrist Republican from Maine who faces a tough reelection race.

Collins is the only Republican in the Senate to assure she will not vote for Judge Amy Coney Barrett’s Supreme Court confirmation. Hogan is one of four sitting Republican governors not to voice support for Barrett’s confirmation before the election.

On Thursday he held a virtual fundraiser for Rep. John Katko, R-N.Y., a member of the bipartisan Problem Solvers Caucus.

Next week, Hogan and Massachusetts Republican Gov. Charlie Baker — who hasn’t said who he’ll vote for but confirmed it won’t be Trump — will hold a virtual town hall for Republican Vermont Gov. Phil Scott, who voiced support of the Trump impeachment probe and has said Trump has “abused his powers” and should not be in office.

Many of the candidates are from centrist, suburban enclaves where Hogan thinks he “could help a little bit and show Democrats the kind of Republican they can feel comfortable voting for.”

Hogan reportedly mulled a primary run for president and wrote in his recent memoir that he’d faced pressure to primary the president in 2019.

"On cable news. In private phone calls. In conversations with fellow Republicans, donors and members of the media. Even with a couple of Trump administration cabinet secretaries," Hogan said.

"The media, I understood. They were itching for a tussle in 2020," Hogan said later. "They were also enamored by the idea of a popular Republican governor, a real Republican, with a proven record of electoral success, going toe to toe with Donald Trump inside the GOP."

He added: "But cabinet secretaries? Encouraging me to consider running against their boss, the president? That one surprised me."

Until this week, Hogan had refused to say who he’d support in the presidential race. But Hogan told the Post he’d voted by mail last week.

Hogan called Reagan “my hero in politics,” alongside his late father, Rep. Larry Hogan Sr., whom he wrote in on his ballot in 2016. His father, who died in 2017, was known for being the first Republican in Congress to support President Richard Nixon’s impeachment in 1974.

“I know it’s simply symbolic. It’s not going to change the outcome in my state. But I thought it was important to just cast a vote that showed the kind of person I’d like to see in office,” Hogan said of this year’s ballot.

Hogan believes his record will help him become a key player in reshaping the GOP’s future post-Trump. He wants to veer the party back to focusing on fiscal conservatism– and has spent his days as governor trimming regulation and fighting off tax increases.

“I’m a lifelong conservative Republican,” Hogan, 64, said, recalling his campaign efforts for Reagan in his younger years. “Reagan was the guy. I marched around as a college kid on the floor of the convention with a Reagan hat and a Reagan sign.”

In July, the Maryland governor told “Your World” he thinks Trump might be sabotaging the party’s chances with moderate voters they might need in the future.

When host Neil Cavuto turned to Hogan's critique of the GOP's direction under Trump, the governor said he wanted to emphasize a "bigger-tent party of communicating and having a more positive vision for the future, reaching out and broadening that tent."

"My concern," Hogan added, "is that the president does a pretty good job of speaking to a portion of the base. He’s not doing a good job of reaching out to the voters we are going to need to win back elections in the future."