EXCLUSIVE: Senate Minority Leader Mitch McConnell is calling on President Biden to “immediately” pull Tracy Stone-Manning’s nomination for Bureau of Land Management (BLM) director over her link to an eco-terrorist plot and her apparently misleading answers to senators about it.

Every Republican on the Senate Energy Committee already signed a letter Wednesday urging Biden to pull Stone-Manning’s nomination, but now Fox News has exclusively learned that the highest-ranking Senate Republican has thrown his support behind the effort to stop Stone-Manning’s confirmation process.

“We now know that President Biden’s nominee to run the Bureau of Land Management lied to the Senate about her alleged participation in eco-terrorism,” McConnell said in a statement to Fox News. “The White House should immediately withdraw her nomination.”

The controversy surrounds Stone-Manning’s ties to a “tree-spiking” operation meant to sabotage logging efforts in the 1980s. During her Senate confirmation process, Stone-Manning told senators in a questionnaire that she had never been the target of a law enforcement investigation. 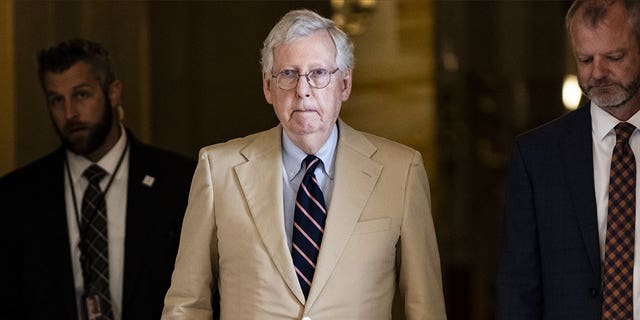 New information from a retired United States Department of Agriculture (USDA) Forest Service investigator and Army veteran Michael Merkley cast doubt on Stone-Manning’s repeated attempts to distance herself from the tree-spiking incident in Idaho’s Clearwater National Forest, which happened when she was a graduate student involved with the environmental group Earth First!

Merkley, who says he was the special agent in charge of the tree spiking investigation, wrote in a letter to the Senate Energy Committee that Stone-Manning was no innocent bystander, thwarted his attempts to investigate the crime and was not forthright about her own role in the plot.

“As the criminal investigator assigned to this case, I believe that I am the only other person, besides Stone-Manning, who knows the full and complete truth in this case and I feel that it is my duty to present the facts to you,” Merkley wrote.

Documents previously reviewed by Fox News showed in 1993 Stone-Manning was granted legal immunity for her testimony that she retyped and sent an anonymous letter to the U.S. Forest Service on behalf of John P. Blount, her former roommate and friend.

Stone-Manning admitted to mailing the letter for Blount in 1989 after receiving the letter from him but said she was unaware the spiking had occurred until reading it.

Her letter to the Forest Service warned that 500 pounds of “spikes measuring 8 to 10 inches in length” had been jammed into the trees of an Idaho forest.

“The sales were marked so that no workers would be injured and so that you a–holes know that they are spiked,” read the letter previously obtained by Fox News. “The majority of the trees were spiked within the first ten feet, but many, many others were spiked as high as a hundred and fifty feet.”

“P.S., You bastards go in there anyway and a lot of people could get hurt,” the note concluded.

During her 2013 testimony for her nomination to lead the Montana Department of Environmental Quality, Stone-Manning claimed she had re-typed a letter warning trees had been spiked and sent it to the U.S. Forest Service to warn it. She also claimed she had no personal knowledge of and did not directly or indirectly participate in any tree-spiking incidents during her lifetime, according to reports.

Tracy Stone-Manning listens during a confirmation hearing for her to be the director of the Bureau of Land Management, during a hearing of the Senate Energy and National Resources Committee on Capitol Hill, Tuesday, June 8, 2021, in Washington. (AP Photo/Alex Brandon)
(AP)

“Throughout this investigation in 1989, Ms. Stone-Manning was extremely difficult to work with; in fact, she was the nastiest of suspects,” the retired investigator wrote. “She was vulgar, antagonistic, and extremely anti-government. She was very uncooperative and refused to provide the hair, hand writing samples, and fingerprints as ordered by the federal grand jury.

“It was not until after we informed her that she would be arrested if she did not comply with the subpoena that she reluctantly provided those samples to me,” Merkley continued. “However, she refused to answer any of my other questions. Eventually, after further investigation, I discovered that she had known all along who had perpetrated the crimes in the Clearwater National Forest.”

Tree spiking is a dangerous and violent eco-terrorism tactic in which metal rods are inserted into trees to prevent them from being cut down. The metal rods damage saws that, in turn, have severely injured people, such as a mill worker whose jaw was split in two from an exploding saw.

The Biden adminstration so far has stood behind Stone-Manning and called her “exceptionally qualified.”

“Tracy Stone-Manning is a dedicated public servant who has years of experience and a proven track record of finding solutions and common ground when it comes to our public lands and waters,” the White House said in a statement in June. “She is exceptionally qualified to be the next Director of the Bureau of Land Management.”