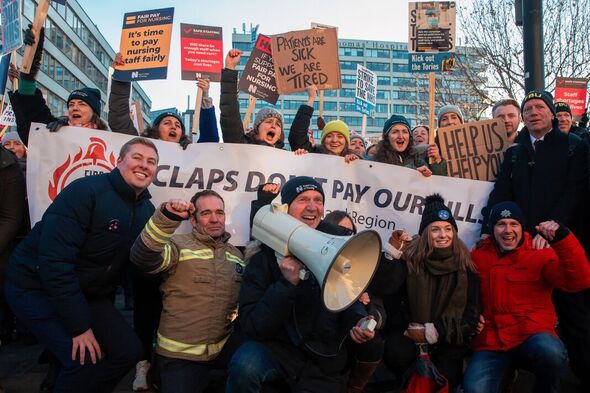 Government insiders said they believed there was an “appetite” for more discussions on both sides and there was a “better atmosphere” after a one-off meeting earlier this week.

Nurses are planning a 48 hour walkout starting on Wednesday in their campaign for better pay.

Time is running out for the action to be pulled because hospitals need time to plan staffing. Another round of strikes is being planned for early February.

A health source said there will be “talks hopefully in the coming days” to find a solution to the dispute.

Treasury insiders said reports that Chancellor Jeremy Hunt had ruled out a one-off payment for nurses or backdating the pay settlement for the new financial year to January 1 were incorrect.

But the source again insisted there is “no new money” and any agreement must be dealt with entirely from within existing budgets.

Health Secretary Steve Barclay said he does not “think it is right” to “retrospectively” to the current pay settlement for nurses and wants to focus on salary increases from April.

He said: “The purpose of the meeting on Monday was to look at this coming year’s pay review body and the evidence going in.

“But of course it was an opportunity to listen to the trade unions in terms of their points on last year’s settlement.

“I don’t think it is right to go all the way back to April and retrospectively look at April when we’re already under way in terms of this year’s pay review body.

“But of course the unions made representations about that and what the Prime Minister said at the weekend is nothing is off the table.”

Latest research shows the public is overwhelmingly supportive of striking nurses with 78 per cent believing they were underpaid.

The YouGov/Aspect poll showed a stark contrast in the support shown for other striking workers.

Only 30 per cent of those surveyed believed rail workers were underpaid and 26 per cent thought they were overpaid.

Support was higher for Royal Mail workers, with 42 per cent believing they should be given more cash.

Health unions said they will not be submitting evidence to the NHS pay review body for the next wage round while the current industrial disputes remain unresolved.

Unions said they believe the lengthy pay review body process is not able to deliver a deal that resolves the current pay and staffing dispute, which has led to a series of strikes, including a walkout by ambulance workers on Wednesday.

They said that the deadline for submitting evidence for the 2022/23 pay year was the end of last January, but it was almost six months later when ministers made public their acceptance of the review body’s £1,400 flat-rate rise.

By then inflation had “gone through the roof”, the unions said.

Unions have accused the Government of “hiding behind” the pay review body.

“The NHS staffing crisis is so acute only prompt action on pay, both for this and the next financial year, can start to turn things around.

“The public knows ambulance response times are worsening and hospital waiting lists growing because the NHS no longer has the necessary staff to meet demand, nor provide safe patient care.

“Ministers must seize the initiative, get everyone around the table and negotiate a way to the best deal for staff, patients and services.”

Secretary of the NHS group of unions, and Chartered Society of Physiotherapy assistant director of employment relations, Elaine Sparkes, said: “Solving the pay dispute, getting vacancy rates down and providing better patient care must be the Government’s number one priority.

“But even if the review body process were to be hurried along, as the health secretary says he’s keen to do, it would still take too long.

“Speed is of the essence, as is ensuring wages are high enough for the NHS to retain experienced staff and attract new recruits. Only direct talks can achieve that.”

Steve Brine MP, chairman of the Commons health and social care committee, said the independent pay review process for 2023/24 should be made “swifter” with a view to solving the current NHS industrial dispute.

But the former Conservative health minister said he thought it a “huge strategic error” on the part of health unions not to engage with the process, and instead urged union leaders to “talk it up and stand behind it”.

He said: “We are less than three months away from the end of the current pay review process.

“That process doesn’t actually report, according to schedule, until September and then it is backdated to April 1.

“My view is that the pay review report that came out last year — it was 188 pages long, it was a comprehensive piece of work — I don’t think they need to take until September.

“I think they need to do a much swifter piece of work, taking into account the cost-of-living challenges, and I think that can give great hope to the unions.”