EXCLUSIVE: The chief of the National Guard Bureau took issue with the White House and Pentagon’s decision to keep 2,280 National Guard troops at the U.S. Capitol, according to a memo obtained by the Fox News Channel.

“I am concerned that the continued indefinite nature of this requirement may also impede our ability to man future missions as both adjutants general and guardsmen alike may be skeptical about committing to future endeavors,” wrote Hokanson, a four-star general. 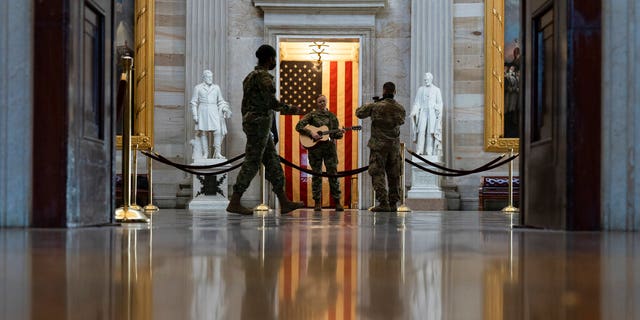 The memo circulated within the White House National Security Council over the past week, Fox News Channel learned.

“Efforts to date have not secured enough volunteers among supporting states to meet the USCP request of 2,280 soldiers, nor Option B of 1000 soldiers,” Hokanson said.

“Yes, the Department of Defense will be funding this as we’ve funded the previous mission, which ends at the end of the week,” Pentagon press secretary John Kirby said on Wednesday. “But that’s not how anybody’s looking at this or foisting that on the Capitol Police, that they’re looking at this as free labor.”

“They have a legitimate need,” he continued. “I’m not going to speak to specific threat. And as I’ve been trying to say over the last few days, it’s not just about the threat environment in a highly polarized, hypercharged environment that we’re in right now. It is very much about a capacity assistance to the Capitol Police as they begin to flesh out and develop what they’re going to need long term to deal with a new reality on Capitol Hill.” 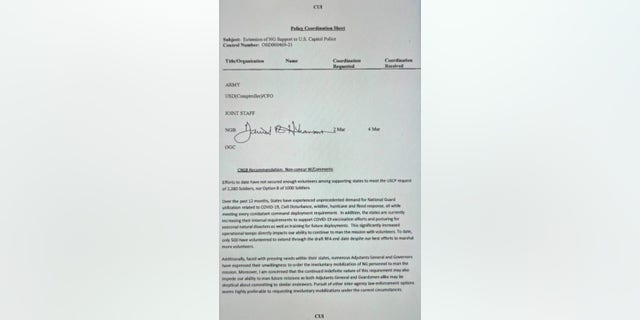 The deliberation on a mandatory activation comes after Austin said he will be extending the National Guard’s time stationed at the U.S. Capitol until May following a request from Capitol Police.

Fox News’ Lucas Tomlinson and Caitlin McFall and the Associated Press contributed to this report.