USA Today reported on Monday that the FBI executed a search warrant at the home of Jerry Harris, one of the stars of the Netflix docuseries "Cheer."

"The FBI is conducting court-authorized law enforcement activity in that area," Siobhan Johnson, a special agent public affairs officer, told Fox News in a statement on Monday.  However, the FBI would not elaborate on specifics and did not name Harris.

A rep for Harris did not immediately respond to Fox News’ request for comment. Netflix had no comment when reached by Fox News.

In a statement to TMZ on Monday, a spokesperson for Harris said: "We categorically dispute the claims made against Jerry Harris, which are alleged to have occurred when he was a teenager. We are confident that when the investigation is complete the true facts will be revealed."

USA Today's report indicated that the 21-year-old has not been criminally charged.

Amid the news about the Netflix star, an Instagram session he hosted with the Democratic candidate resurfaced.

"I had the opportunity to speak with Vice President @JoeBiden a few days ago about some really important issues facing our country right now, in particular young adults and the Black community," Harris wrote on June 12. "Check out part of our conversation about voter apathy and why it is so important that we all register to vote. Together we have the power to make a real change!" 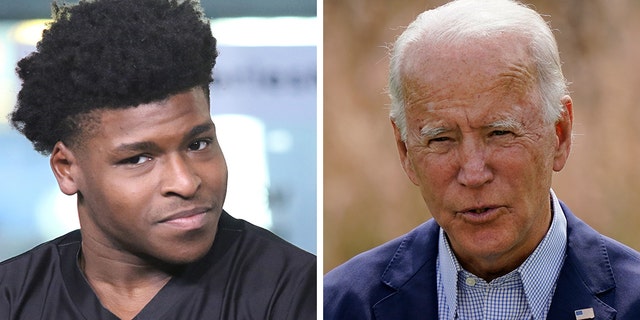 On Aug. 1, Varsity’s chief legal officer, Burton Brillhart relayed to police in Florida and Texas via letters that the organization was made aware of "inappropriate sexual conduct" allegations against Harris and, as required by law, reported the information to authorities,” said the publication.

"As a result of the recent allegation, we have barred this person from having any affiliation with Varsity Brands or any of its subsidiaries or affiliates, now and in the future," Burton wrote, according to USA Today.

Furthermore, the report said Brillhart also included two screenshots of his correspondence with law enforcement, which allegedly reveals a snippet of a text conversation Harris had with another individual.

"Would you ever want to ****," one message allegedly reads and appears to show a picture of Harris’ face, while the other screenshot – which is a series of text messages – indicates an exchange had on May 3, 2019, and allegedly shows a person named “jerry harris” as writing, "Hey btw I found a place for us to do stuff it’s actually pretty good haha."

In Brillhart’s letters to police, he described Harris as a former employee who was not working for Varsity at the time of the alleged incidents, according to USA Today.

The company told Fox News on Monday that while they can't comment on "an active law enforcement investigation; we continue to cooperate with authorities in their inquiries on this matter."

Harris rose to fame when he was featured on the original Netflix docuseries “Cheer," which debuted on the streaming platform in January and follows the competitive cheer squad at Navarro College in Corsicana, Texas, as they mount up for a national championship.