New York (CNN Business)A staggering 293 journalists were imprisoned in 2021, according to an annual census by nonprofit group Committee to Protect Journalists. That tally is up from 280 journalists in 2020 and is the highest number CPJ has ever reported since it started keeping track of the data in 1992.

For the sixth straight year, the number of journalists imprisoned exceeded 250, according to CPJ.
“This is a stark reminder of a continuing trend of creeping authoritarianism around the world,” CPJ’s Deputy Executive Director Robert Mahoney told CNN Business. “Governments are becoming more and more intolerant of independent reporting, criticism, journalists unearthing dirty little secrets like corruption, and are using a variety of means to stop that and one of them is imprisonment.”

With 50 journalists behind bars, China topped the list for the third consecutive year. Among them is Haze Fan, a Chinese national working in Bloomberg’s Beijing bureau who was detained last December. Bloomberg reported this week that there have been no updates to her case a year later.

CPJ said this year’s census includes Hong Kong for the first time. That is where Jimmy Lai, founder of pro-democracy newspaper Apple Daily, was sentenced to 14 months in prison earlier this year. China’s National Security Law, implemented in 2020 after months of anti-government protests, broadened Beijing’s power over the special administrative region. 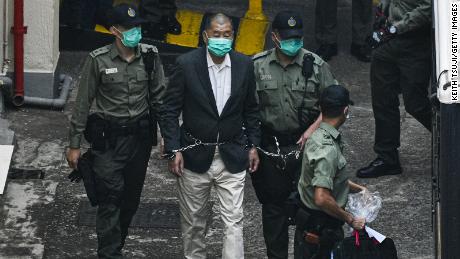 “The vibrant Hong Kong media that we once knew is slowly being throttled,” Mahoney said.
A separate report published earlier this week by advocacy group Reporters Without Borders also found China to be the world’s “biggest captor of journalists” with at least 127 journalists detained.
Mahoney told CNN Business that the statistics in CPJ’s annual census are “conservative.” The census includes only journalists incarcerated as of December 1, which means CPJ did not count American journalist Danny Fenster who was released from prison in Myanmar in November.

“We spend a lot of time researching the cases and include only those journalists who we are absolutely certain are in jail because of their work as journalists. If there’s any doubt, we put them in an unconfirmed category,” Mahoney said. “Bottom line is the world is becoming a more difficult place for independent journalists. Countries are criminalizing the very act of reporting.”
CPJ’s report also found at least 24 journalists were killed for their work, as of December 1, up from 22 last year. That statistic includes 19 journalists who were murdered in retaliation. India ranked as the country with the highest number of journalists murdered in retaliation, with four deaths confirmed in 2021.
Source: Read Full Article