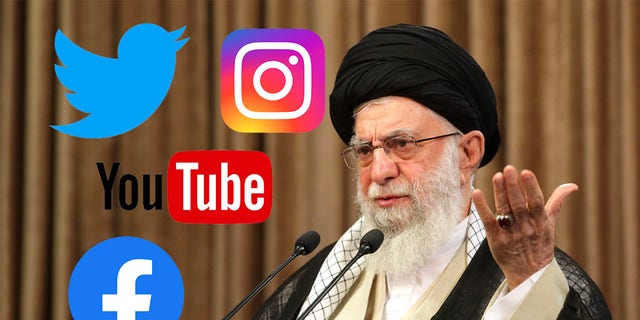 EXCLUSIVE: House Republicans are proposing legislation that would expand U.S. sanctions law to prohibit social media companies from allowing foreign individuals or entities sanctioned for terrorism from using their platforms.

The legislation, led by GOP Reps. Andy Barr, Jim Banks, and Joe Wilson, and cosponsored by 40 other members of the House Republican Study Committee, is titled the “No Social Media Accounts for Terrorists or State Sponsors of Terrorism Act of 2021.”

“U.S. law gives big tech a free pass to provide platforms to terrorist groups and dictators,” Barr, R-Ky., told Fox News.  “Social media companies should not provide a vehicle for terrorist groups like ISIS to raise money or for dictators like the Ayatollah of Iran to spread propaganda.”

Under current U.S. sanctions law, the president of the United States does not have the authority to require social media platforms to adhere to U.S. sanctions laws on terrorists due to the International Economic Emergency Powers Act of 1976—specifically the “Berman Amendments” passed in 1988 and 1994—which prohibit the president from even indirectly regulating or prohibiting anything to do with the free flow of informational services.

Under the amendments, the president of the United States “does not include the authority to regulate or prohibit, directly or indirectly- (1) any postal, telegraphic, telephonic, or other personal communication, which does not involve a transfer of anything of value.”

The amendment also does not give the president authority to regulate or prohibit “the importation from any country, or the exportation to any country, whether commercial or otherwise, regardless of format or medium of transmission, of any information or informational materials, including but not limited to, publications, films, posters, phonograph records, photographs, microfilms, microfiche, tapes, compact disks, CD ROMs, artworks, and news wire feeds.”

The Republicans argued that the Berman Amendments were passed before the modern age of the internet and before social media existed, and said they have been used by Big Tech and others to argue that social media companies can provide services to terrorists.

Fox News exclusively obtained a copy of the new legislation, which would clarify the existing sanctions law by providing the president with authority to sanction the “provision of services,” including the provision and maintenance of accounts, by social media platforms to foreign individuals or entities sanctioned for terrorism, and senior officials of state sponsors of terrorism.

“Economic sanctions prohibiting the provision of services to individuals and entities sanctioned for terrorism should apply to social media platforms, while still supporting the free flow of information and maintaining the important principle that information should remain free of sanctions,” the legislation states.

The aide said the legislation seeks to “require the president to implement regulation that will treat social media platforms just like the bank and insurance companies—they cannot provide a service to a sanctioned individual or entity.”

The legislation states that social media platforms “make a profit on accounts provided and maintained to individuals and entities sanctioned for terrorism through the sale of advertisements which are viewed by such sanctioned individuals through their accounts.”

The legislation also urges the Treasury Department to “ensure that consumer communications technologies, as well as tools to circumvent government censorship, are available to civil society and democratic activists in such countries.”

In the legislation, the lawmakers point to Iran’s Supreme Leader Ayatollah Ali Khamenei, who has been a specially designated global terrorist by the Treasury Department, and “the leader of the world’s leading State Sponsor of Terrorism,” saying that Khamenei has “multiple social media accounts on Twitter and Instagram.”

“The Supreme Leader has used his accounts to threaten violence against Americans, support the destruction of the State of Israel, promote conspiracy theories and disinformation regarding COVID-19 vaccines and incite anti-Semitism on a number of occasions,” the legislation states.

“The Foreign Minister of Iran, Javad Zarif, a senior official of a State Sponsor of Terrorism, has a number of social media accounts on Twitter, Instagram and other platforms,” the legislation states, noting that last month, he tweeted “an anti-Semitic conspiracy theory that Israel was plotting attacks on Americans in Iraq.”

“The President of Syria, Bashar al-Assad, responsible for the brutal killing of half a million of his own people, and the President of a State Sponsor of Terrorism, has multiple social media accounts on Twitter and Instagram,” the bill reads. “He has used his accounts on social media to whitewash and promote his regime, and promote hatred against the United States and Israel.”

The legislation goes on to point to the President of Cuba Miguel Diaz-Canel, who “heads a regime responsible for multiple violations of human rights, and which is a State Sponsor of Terrorism,” and says he has “an account on Twitter representing the official Cuban Presidency,” which they claim he uses to “promote global communism, anti-Americanism, and whitewash the Cuban regime’s human rights abuses.”

“Thanks to Rep. Barr, we have a bill that would fix this double standard and hold Big Tech accountable to the same sanctions laws other American companies are required to follow,” Banks said.

Wilson, R-S.C., another co-sponsor, said that under current law, “social media platforms can provide services to terrorists and rogue regimes sponsoring terrorism with American blood on their hands.”

“The Supreme Leader of Iran, the President of Cuba, and criminal Bashar al-Assad all have social media accounts on multiple platforms hosted by American companies,” Wilson continued. “This is unacceptable which is why I cosponsored this important conservative initiative with over 40 of my colleagues in the Republican Study Committee to hold Big Tech accountable to the same sanctions laws other companies are required to follow.”

The White House did not immediately respond to Fox News’ request for comment on the legislation.

Meanwhile, if the legislation is enacted, the congressional aide told Fox News that Section 230 of the Communications Decency Act would not be a shield for social media companies.

Republicans have questioned whether social media giants should still be afforded liability protections under Section 230 — a rule that shields social media companies from being held liable for content on their platforms while allowing them to moderate that content.

The aide said that the protections social media companies have from the Berman Amendments “are even worse than 230.”

“They can hide behind the fact they are related to information, and are immune from any presidential policy making or regulatory policy making that would reach them in terms of sanctions law,” the aide said.

A source familiar told Fox News Twitter has examined the issue closely in consultation with outside counsel. The source told Fox News that they understand Twitter is currently in compliance with sanctions regulations.

Social media platforms have received criticism from Republicans, and international scrutiny for permanently banning former President Trump from the platforms in the wake of the Jan. 6 Capitol riot.

Twitter, specifically, has come under fire for removing Trump from the platform indefinitely, claiming his continued use of his account risked incitement of violence, while allowing Iranian Supreme Leader Ayatollah Ali Khamenei to continue using Twitter, despite his threatening tweets against the U.S. and using the platform to threaten attacks against Israel.

During a Senate hearing in October, Twitter CEO Jack Dorsey explained Khameni’s tweets did not “violate our terms of service because we considered them ‘saber rattling,’ which is part of the speech of world leaders in concert with other countries.”

“Speech against our own people or a country’s own citizens we believe is different and can cause more immediate harm,” Dorsey added.

Twitter last month, though, told Fox News that Khamenei’s account is not considered verified on the platform.

Twitter told Fox News that the company recognizes Khamenei as “a theocratic leader and religious figurehead” as opposed to a traditional leader of the state.