The current leader of the undecided Democratic mayoral primary in the nation’s most populous city has a warning for his party’s left flank amid calls to defund the police.

Eric Adams, who’s maintaining a sizeable lead over his nearest rivals as results continue to come in from Tuesday’s mayoral primary in New York City, told reporters on Thursday that “I am the face of the new Democratic Party.”

The president of the New York City borough of Brooklyn and a former captain in the New York City Police Department repeatedly emphasized during the closing weeks of the mayoral primary campaign that curbing the increase in crime and gun violence in the city would be his top priority if elected. And Adams pledged in a recent radio interview “to zero in on gangs and guns.” 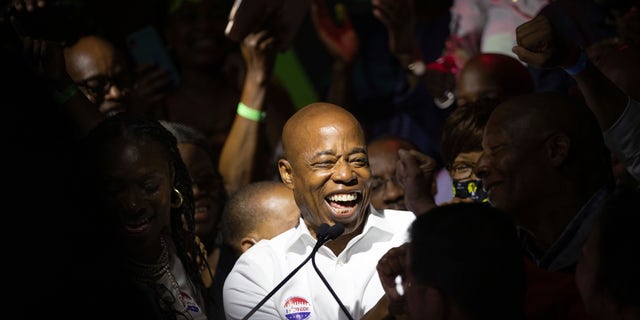 He also pushed backed against calls to defund the police, as crime and public safety increasingly became a top issue in the primary battle.

“Look at me, and you’re seeing the future of the Democratic Party,” Adams said at a news conference outside Brooklyn borough hall two days after the primary.

Adams, who is Black, emphasized that “America is saying we want to have justice and safety and end inequality. And we don’t want fancy candidates. We want candidates, their nails are not polished, they have callouses on their hands and they’re blue collar people.”

Adams currently has around 32% of the vote of the first-choice picks in the ranked-choice election, about 10 points ahead of leading progressive contender Maya Wiley, who had served as a lawyer in the administration of term-limited Mayor Bill de Blasio.

“I believe my message is going to cascade across the entire country,” Adams said, according to multiple local news reports.

And he praised President Biden for urging cities to use federal funding to hire more police, thanking the Democratic president for “hearing my voice, hearing what I have been saying.”