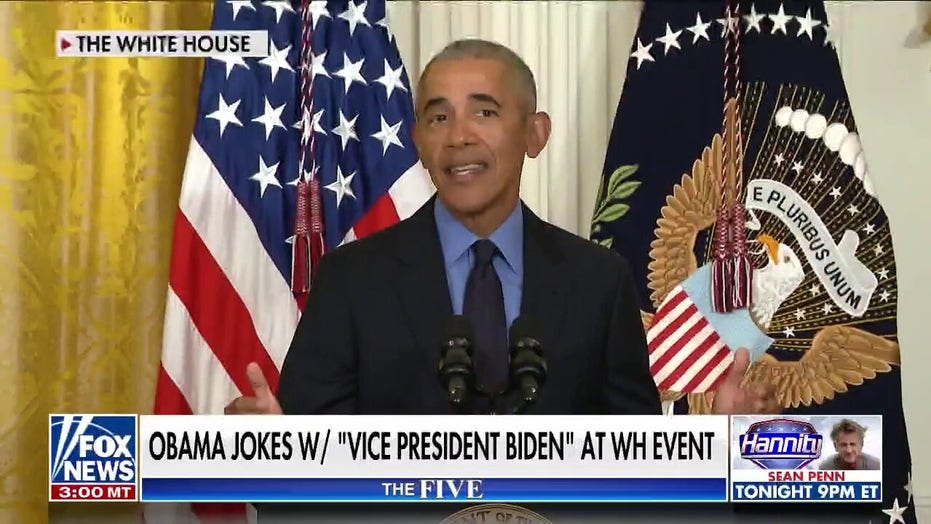 ‘The Five’ reacts to Obama’s return to the White House to tout Obamacare.

Obama visited the White House, for the first time since leaving office in 2017, where he and Biden hosted a health care event in which they touted the Affordable Care Act and discussed options for making health care more affordable.

A particular video from the evening, which is being widely shared online, shows a somewhat embarrassed Biden seemingly wandering around the room alone while Obama is crowded with people eager to speak with him.

“Literally no one wants to talk to Joe Biden,” the Republican National Committee said on Twitter, sharing a 13-second clip from the event. 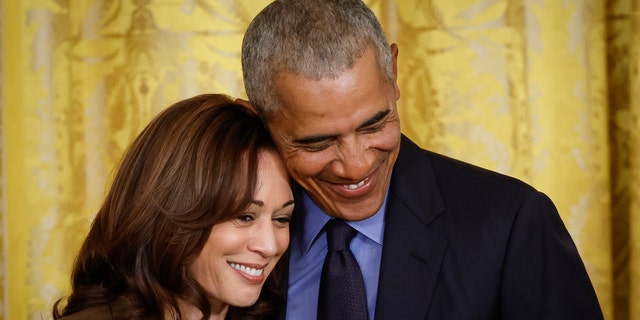 WASHINGTON, DC – APRIL 5: Former President Barack Obama hugs Vice President Kamala Harris during an event to mark the 2010 passage of the Affordable Care Act in the East Room of the White House on April 5, 2022, in Washington, DC.
(Photo by Chip Somodevilla/Getty Images)

“This is so sad,” the RNC added, with another 25-second video similarly showing people walking up to speak with Obama and shake his hands while skipping Biden.

During the event, immediately before the RNC video, Biden is in the group with Obama, Vice President Kamala Harris, Sen. Amy Klobuchar, House Speaker Nancy Pelosi, and others before he leaves and appears to be searching for someone in the room. 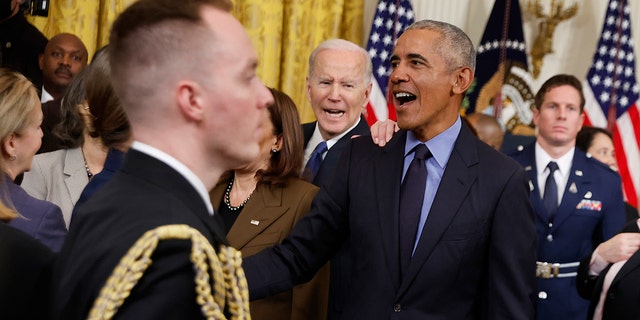 Former President Barack Obama (C) and President Joe Biden greet friends and guests at the conclusions of an event to mark the 2010 passage of the Affordable Care Act in the East Room of the White House on April 05, 2022, in Washington, D.C.
( Chip Somodevilla/Getty Images)

After a brief moment, Biden then stops, turns back to gauge how busy Obama is, and then turns and gestures to Interior Secretary Deb Haaland to join him on the stage. She does, and the two then walk back to Obama, who appears to say he will walk over to them later. Biden and Haaland return to her seats and greet other guests.

Shortly after the video began making its rounds online, the former president praised Biden in a tweet. 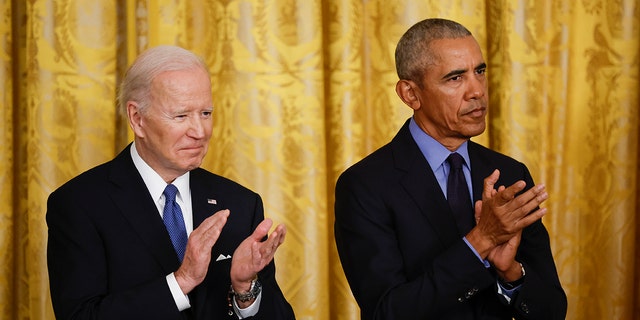 WASHINGTON, DC – APRIL 5: U.S. President Joe Biden and former President Barack Obama attend an event to mark the 2010 passage of the Affordable Care Act in the East Room of the White House on April 5, 2022 in Washington, D.C.
(Photo by Chip Somodevilla/Getty Images)

“Always great catching up with @POTUS. Thanks for all you’re doing to help even more Americans get access to quality, affordable health care,” Obama tweeted.

Always great catching up with @POTUS. Thanks for all you’re doing to help even more Americans get access to quality, affordable health care. https://t.co/vDYBIxjIy9

The event was undoubtedly scheduled with the former president to be a much-needed win for Biden, who faces scrutiny for record-high inflation, soaring gas prices, and blame for not doing more to end the war in Ukraine that has lasted over 40 days.