Several Conservative MPs in the race to replace Theresa May as prime minister, including frontrunner Boris Johnson,have said they would try to implement a no-deal Brexit on October 31, the UK’s scheduled exit date, even if parliament opposed such a plan.

However, the opposition Labour party said it would on Wednesday force a Commons vote which would allow MPs to seize control of the parliamentary agenda, normally controlled by the executive, on Tuesday 25 June.

Opposition MPs would then have the chance to introduce legislation on that day which they believe could help prevent the UK leaving the EU without a deal in October.

The motion has the backing of Labour leader Jeremy Corbyn, Lib Dem leader Vince Cable, and the SNP’s Westminster leader Ian Blackford, as well as senior Tory MP Oliver Letwin, meaning it will likely command the support of a majority of MPs in the Commons.

Two of the 10 candidates for leader, Dominic Raab and Esther McVey, have said they would be willing to suspend parliament in order to force through their preferred outcome, something leadership rival Rory Stewart, the international development secretary, said would be unconstitutional and illegal.

Other members of the Cabinet, including Theresa May, have said the UK cannot leave without a deal unless such an outcome is approved by parliament.

Critics have also warned it would drag the Queen into politics because she would be required to play a formal role in the act of dissolving parliament.

Keir Starmer, Labour’s shadow Brexit secretary, said: “The debate on Brexit in the Tory leadership contest has descended into the disturbing, the ludicrous and the reckless.

“None of the likely candidates for the top job has a credible plan for how to break the deadlock before the end of October.

“Instead, we have witnessed candidates openly advocating a damaging no deal Brexit and even proposing dragging the Queen into politics by asking her to shut down Parliament to achieve this.

“MPs cannot be bystanders while the next Tory Prime Minister tries to crash the UK out of the European Union without a deal and without the consent of the British people. That’s why we are taking this latest measure to end the uncertainty and protect communities across the country.

The motion will use the same procedure used this year when parliament successfully blocked a no-deal Brexit in March.

Unlike typical opposition day debates, the motion will be binding, meaning Downing Street cannot opt to ignore it.

How will MPs stop a no-deal Brexit? 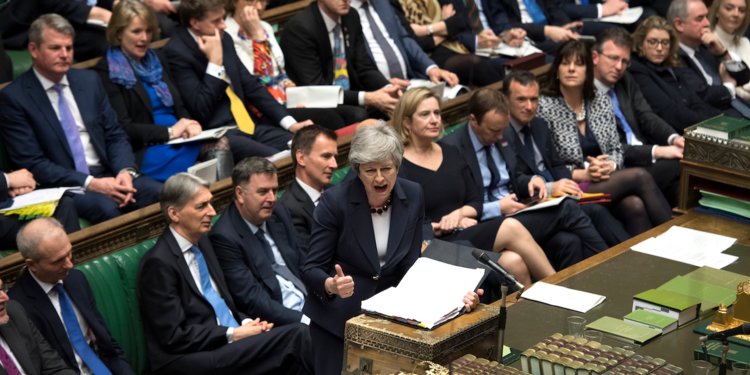 MPs during a debate on indicative votes on Brexit in the House of Commons, 27 March 2019.UK Parliament / Jessica Taylor

There are limited options available to those wishing to prevent the next prime minister from pursuing a no-deal Brexit. Parliament has previously intervened on this issue through seeking to amend major Brexit votes brought forward by the government.

However, with no such votes required before Britain’s exit date of October 31, an incoming prime minister could in theory force Britain’s exit through a combination of sitting on their hands and suspending parliament in order to prevent any binding votes being brought forward.

This new cross-party motion seeks to pre-empt that by forcing the current government to allocate parliamentary time at the end of June, in which MPs can then pass legislation that would seek to prevent a new prime minister from leaving the EU without a deal.

Such legislation was previously pursued by MPs in the run-up to Britain’s original exit date of March 31, but was later withdrawn after the government indicated that they would delay Britain’s exit.

Such legislation, if successfully renewed later this month, could seek to force the incoming prime minister to either seek a delay, or if that proved unsuccessful, to simply revoke Article 50 and cancel Brexit.

Faced with such a prospect, the new PM may then feel they have little choice but to seek a general election.