Patagonia trended on Twitter this week as images of their new (and political) clothing tag ― it reads, “Vote the assholes out” ― made the rounds.

Over the weekend, Outlander Magazine tweeted a snapshot of the tag, which reporter Ana Navarro-Cárdenas then posted about on Monday night. Navarro-Cárdenas asked Patagonia whether the tag was real, pushing more people to tweet about the image and inquire the same.

HuffPost confirmed with Patagonia that the tags are real. Company spokesperson Corley Kenna said via email that they were added to the brand’s 2020 men’s and women’s Regenerative Organic Stand-Up Shorts “because we have been standing up to climate deniers for almost as long as we’ve been making those shorts.”

Kenna also said that Patagonia’s founder, Yvon Chouinard, “has been saying ‘vote the assholes out’ for several years.”

“It refers to politicians from any party who deny or disregard the climate crisis and ignore science, not because they aren’t aware of it, but because their pockets are lined with money from oil and gas interests,” she said, noting that Chouinard put more of his thoughts on that into a letter to the 1% written earlier this year.

Many shared their reactions to the bold words embroidered into Patagonia’s clothing on Twitter, with some sharing that they’d be purchasing items from the brand because of this move:

The brand has been very vocal about their feelings toward the U.S. Senate right now. On Patagonia’s website, bold graphics implore visitors to “vote climate deniers out of office.”

“The 2020 US Senate races will have a significant, long-lasting impact on the strength of our nation’s climate policies and the existence of our wild places,” reads the site above an infographic of “Senate Races To Watch.” 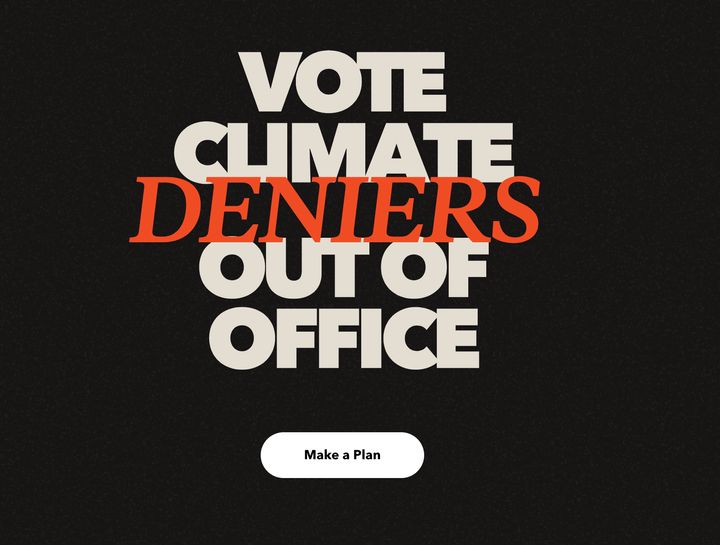 In another part of the site, an article titled “Hell Yeah, Your Vote Counts” reminds people “why voting is essential to the protection of our public lands.”

In addition to matters like voting and climate change, Patagonia has also pledged to do better and more for racial equality in America.

“We must confront Patagonia’s lack of progress and take full ownership of the legacy of our failures. We must listen to and support our Black, Indigenous and colleagues of color first and commit to becoming a more inclusive and equitable company,” the brand wrote in a statement in response to the deaths of “Ahmaud Arbery, Breonna Taylor, George Floyd, Tony McDade, Dijon Kizzee, and far too many others.”